When you think of Greece, you probably conjure up images of sun, sea and sand. I doubt you get to mountains. However, there are many mountains in Greece, with the highest on the mainland being Mount Olympus, legendary home of Zeus and the ancient Greek gods and goddesses. The peak, Mytikas, is 2,918 metres.

If you’re looking for a home that’s somewhere cooler than the scorching heat of some parts of Greece in the summer, and you want somewhere with stunning views, then a mountain home could be for you. Greece’s mountain villages are generally less touristy than their coastal equivalents, and you can feel that you’re living in a much more Greek environment in many ways. As a plus, houses in many mountain locations are extremely affordable.

For years I thought that this mountain was near Olympia, home of the original Olympic games.  The mountain is in northern Greece, bordering the provinces of Macedonia and Thessaly. I only found out where Mount Olympus is when I visited Olympia in the Peloponnese.

At the moment, early December, Mount Olympus is covered in snow, and you can ski on its slopes if you want to. There are 6 ski slopes on the mountain, two lifts and you can also go snowboarding if you prefer. The ski centres can provide your equipment, so you don’t need to pack it. 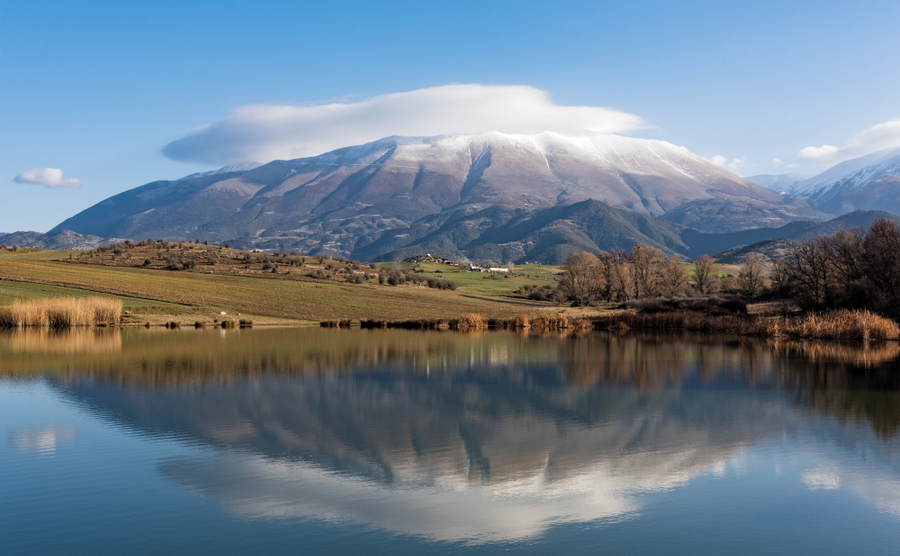 Mount Olympus is not near Olympia, as you might think, but rather up north in Thessaly.

Clearly there are benefits to living close to Mount Olympus if you love beautiful scenery and outdoor sports.  If you want to live close to the home of the ancient gods, you could try looking for properties in Litochoro where there are a number of different types of property for sale, from a modern luxury villa to a studio flat. The villa has five bedrooms and covers an area of 244 square metres. This would set you back €2.5 million, whereas a studio apartment of 37 square metres, can be yours for only €37,000. However, for the same price you could purchase a two-bedroom apartment in the town centre.

Unsure about how to purchase a home in Greece? Learn how in our new guide, How to Pay for an Overseas Property.

Mountains in and near Athens

In fact, if you travel around Greece, even on the islands, you will probably see mountains. There’s even a small one (300 metres) in central Athens. It’s called Mount Lycabettus where you will find the church of St George almost on its top. You may stumble across the St George Lycabettus Hotel, which is a great place for ice cream and coffee, as you wend your way up from the centre of Athens. I once sat outside the hotel and counted how many vehicles went past which didn’t have a dent on them. There weren’t any. That was at least 20 years ago, and Greek driving is markedly better now than it was then.

If you travel around Greece, even on the islands, you will probably see mountains.

There are six other hills in Athens, including Pentelis which is north of the centre. There you can find expensive properties which often go for more than a million euros. However, Vouliagmenis is the most expensive area of Athens.

This mountain range extends for more than a hundred kilometres, finally falling to the sea. Opposite the Taygetus mountains, separated from them by the Spartan plain, is Mount Parnonas. 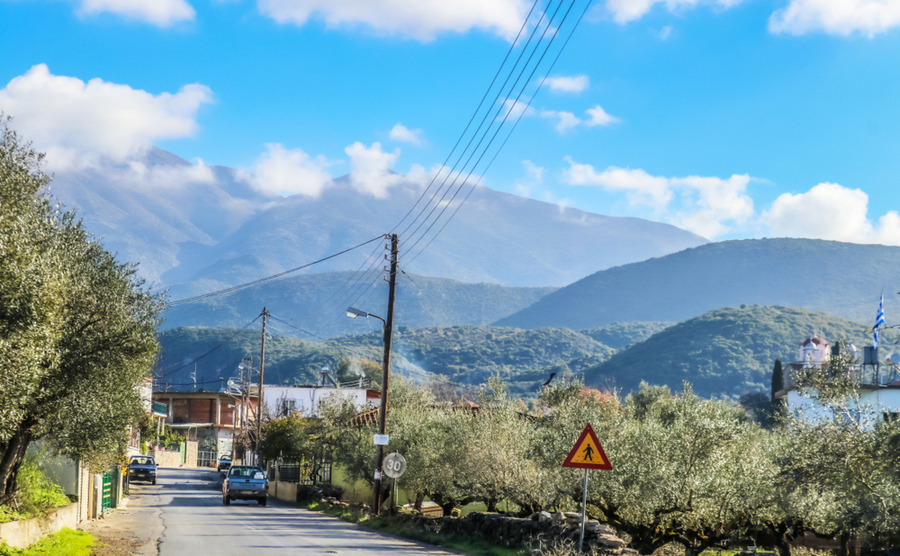 The Taygetus mountains are found in the south of the Peloponnese.

The Taygetus mountains with their Profitis Elias peak (2,404 metres, although some sources say it is 2,407 metres) is remarkably picturesque at all times of year, especially at sunrise and sunset. If you love mountains as much as I do, you could consider buying a property in this region.

Our trusted partners can help you with the legal aspects of buying in Greece – simply click here to make an enquiry.

There are several villages that cling to the mountains, including Gorani, which is the closest village to the Gola monastery.

Gorani is a small village with traditional houses, several of which are for sale, although they need renovation. However, they are cheap and spacious, on two levels. The ground floor was originally for animals, while the family lived on the first floor.

The village has a picturesque square with a small family-run taverna which serves good food, although you have to have what there is. There’s always a selection of cheap traditional food, and you can ask for pikolia, which is a selection of what’s on offer. Typically, there are keftedes [meatballs], cold pressed pork, olives, stuffed vine leaves [dolmadakia], feta sprinkled with oregano, tomatoes and bread. Depending on the temperature you can sit inside or out. A regional speciality is a sausage with orange.

My favourite hotel, the Faris, is close to the Profitis Elias peak, above Gorani and Gola. The owner, George, is very welcoming. He also speaks very good English and serves excellent traditional food, cooked with locally-sourced ingredients. If you stay for breakfast in late autumn, try his home-made chestnut preserve with the creamy yoghurt. He does a very good feta omelette too. He’s a fount of local information, so feel free to ask about local properties for sale.

Perhaps not as well-known as Mount Olympus, Mount Ida is the highest mountain on Crete, at 2456 metres. There are many legends surrounding Mount Ida and the Idean Cave where, it is said, initiations into the sacred mysteries were held. Those who took part in the initiation ceremonies were sworn not to divulge them to others. Allegedly Pythagoras and Plato were just two initiates. The cave was important because it was said to be connected to Zeus‘ upbringing. 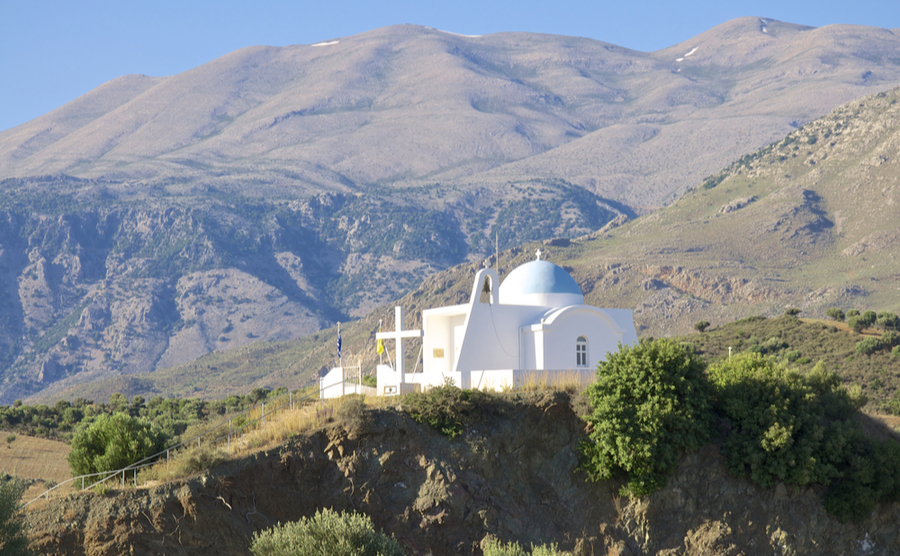 Perhaps you’d like to live near Mount Ida, in which case you could look at properties in Rethymno or Chania. New properties are being constructed near the village of Melambes which has views of Mt Ida. You might want to think about buying a plot of land and having your dream house built There are also dilapidated properties for sale in the area.

If you’re buying a mountain home – or any home in Greece – don’t gamble your savings on the exchange markets. Find out about making safe transfers in the Property Buyer’s Guide to Currency.

A glance at property listings in the Rethymnon area might deter you from looking any further. Also, as Crete is a border zone, foreigners could have a long wait before they can buy a residential property on the island.

Greece and its islands have many mountains, all with their own distinct character. They abound with myths and legends, and locals will happily recount these to you if you have a few hours to spare. If you decide to hike up Greek mountains, do some research to discover what plants and animals you might encounter. Good luck with your house-hunting.