Written by Christopher Nye,
9th May 2020

As Plato said, necessity is the mother of invention, and Greece’s lockdown could be just what the country needed to modernise its property buying systems. We look at the lockdown in Greece, how it is being relaxed in time for summer and what it might have done for property prices.

Greek senior school children are preparing to return to their lessons from Monday. Greece has started to open smaller shops and businesses, with many more retail establishments opening from Monday 11 May. After two months of serious lockdown, the Greece is gearing itself up for a return to normality.

Greece has successfully contained the virus, with 150 fatalities and new infections running at around 10 to 15 per day, compared with the UK at 100 times that number. The reason for its success was primarily a rapid lockdown. With a large elderly population and health services decimated during the country’s financial crisis, the authorities saw strong social distancing as their only choice.

They moved fast. Lockdown measures started in late February – three weeks before the UK – with no carnival parades for the start of Lent. They were also much more draconian than in the UK, with a special permit required for anyone leaving their home.

The worst affected areas were the western side of the Peloponnese – the Italian side of the country, and the Athens area. Most of the islands, however, have had no cases at all.

For property buyers, travel restrictions have been the biggest problem. Otherwise, property deals already in the pipeline have been allowed to continue in the last few weeks of the lockdown, with courts, that otherwise are closed, being open for property settlements.

There is also some hope that the sometimes tortuous processes of property buying in Greece, little of it possible off-line, will be given a much needed modernisation due to social distancing rules. A start has been made with the introduction of online signatures.

Lefteris Potamianos, president of the Athens-Attica Estate Agents Association, said: “there have recently been some efforts to digitalize certain procedures, such as the confirmation of signatures, which is now done electronically.” 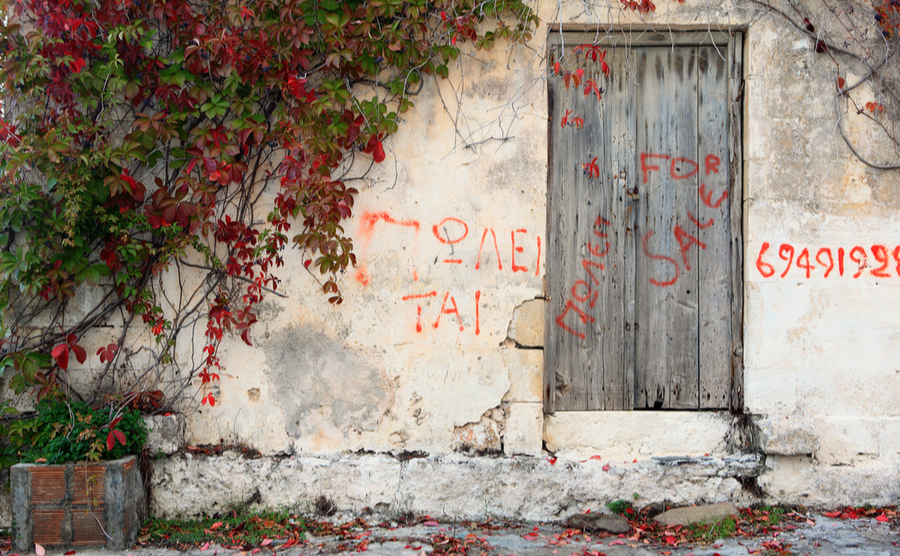 A renovation project awaits you, in Crete

With most islands unaffected, this will be a major selling point when the summer starts, based around a message of “we are a safe country and we only accept someone who is definitely not sick.”

The Greek government will be unveiling plans for the hotel, aircraft and ferry industries  next week, with a more extensive ‘roadmap for tourism’ in early June.

It hopes that this will be part of a Europe-wide arrangement, but the current proposal to save Greece’s summer season – and as much of the 25% of GDP as tourism brings in – is by opening on 1 July. Safety measures will include:

The Greek tourism minister Harry Theoharis urged British visitors to book their holidays in Greece, saying: “Social distancing rules will apply but we have welcomed tourists for more than 50 years and we want to continue showing the kind of hospitality that we’re very much known for.”

He added: “You should feel safe. Greece is a safe country and in many cases, much safer, I’m sorry to say, than your own country.”

Greek property prices collapsed by 40% during the financial crisis and had only just began to recover in the past year or so. So what could the pandemic and potential drop in GDP even greater than between 2010 and 2015 do to prices?

According to a new report from Greek property website Spitogatos, demand remains high, with 85% of property hunters intending to continue their search. Their CEO Dimitris Melachroinos said: “We discovered our users remain active – particularly in the latter half of the quarantine – not only in seeking properties but also in taking the next step of contacting the people placing the ads at the same rate as before the movement restrictions”.

He added that there was an “accumulation of demand” and it was as yet impossible to say what that would mean for prices. In other countries such as Cyprus, however, the general consensus seems to be that drops of 2 to 5% are likely.