The Greek escape: could you do a Durrell?

TV hit The Durrells has returned to Sunday nights. This warm-hearted tale of a family leaving England for Greece in the 1930s stars Keeley Hawes as the impoverished widow who takes her family to Corfu. The Durrells couldn’t afford to live well in England and believed a simpler, cheaper and warmer way of life was possible in Greece – is it still?

Louisa Durrell moved to Corfu because, as an impoverished widow with four children of varying ages, she couldn’t make ends meet in England. Based on Gerald Durrell’s memoir of life in Greece before the war – My Family and Other Animals – the first series began with the whole family squashed into a tiny house in Bournemouth watching the cold rain fall outside, in August. Mrs Durrell looks at a pile of bills and wonders if her children are really getting the best possible start in life.

Not much changes does it? If the British weather isn’t enough to drive us to new lives in the Mediterranean then the outrageous property prices and cost of living just might. In interviews about the show, its star Keeley Hawes said a mother who took her brood to Greece today would probably get locked up by social services. In reality, of course, many people do move their families across Europe to a whole new lifestyle, and it has never been more possible.

Many people move their families across Europe to a whole new lifestyle, and it has never been more possible.

Would it save you money though? Last night’s episode began with Mrs Durrell running out of money again. She moved to Corfu in 1935, but that Greek island has become something of a playground for the rich and famous now, so perhaps Crete would be a better option? Like Bournemouth, it’s a popular tourist destination with sandy beaches, but that’s where most similarities end. So let’s compare living expenses between the two and see how much our modern Mrs Durrell might save on the family budget.

Council tax in Bournemouth is £1,200 per annum for a smallish property, and in Greece it’s €4 per square metre, or £255 for an average two bedroom villa. VAT in the UK is 20 percent and in Greece it’s 23 percent, but Britain has higher punitive taxes on products such as fuel, tobacco and alcohol. 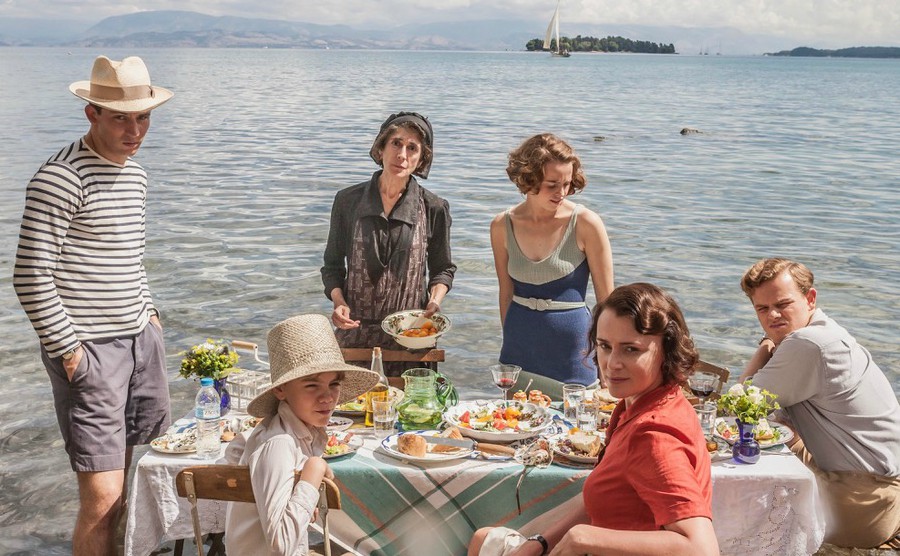 Keeley Hawes leads the cast of The Durrells

You and your family will be covered by your EHIC to start off in Crete. After that, if you’re working and paying tax in Crete then you will be assigned a GP and treated by the local health system free of charge, just like in the UK. Of course that might change after the UK leaves the EU.

The UK and Greece both pay around €1.30 for a litre of unleaded but a new car in Greece will cost 25% less than from your Bournemouth showroom. On public transport you get less than half the distance for your buck in the UK. The charming taxi driver Spiro from The Durrells would be earning a little less at the start of the trip but with a much reduced rate per kilometre (less than €1 per kilometre in Greece compared to over £1.50 in most UK taxis).

Food shopping in Greece is nearly 40% cheaper, but you might have to change a few of your eating and buying habits to take advantage of that. As Mrs Durrell says: “We are not on holiday, we are here to live like Greeks”, so while our modern version has the option of buying food in Chania’s equivalent to Bournemouth Sainsbury’s, for real bargains she will be shopping daily at the village or town market. Fruit and vegetables should always be cheaper in Greece if they are grown there – you can expect to pay more for imported goods.

Food shopping in Greece is nearly 40% cheaper, but you might have to change a few of your eating and buying habits to take advantage of that

For her favourite tipple, gin, Mrs Durrell would be paying around €18 for a bottle of Gordon’s at a Crete supermarket, and the same in the UK. If she’s treating the family to a meal out in a local café or restaurant prices in Greece are half of what you’ll pay in Bournemouth, but if you opt for global fast food and coffee chains the difference is much less – at least the 1930s Durrells didn’t have that option. Take the kids to the cinema and you’re paying around a third less in Greece.

So our modern Mrs Durrell can indeed live much better on the same money in Greece today, just as in the 1930s. The true riches that the Durrells found in their Greek life, however, was not in their purses and wallets, but in the family’s wonderful new lifestyle, education and opportunities. And that’s as true today as ever.