The expat life in Greece, from one who’s done it!

“I first visited Greece in 1978 and fell in love with it. As soon as I walked onto the steps to exit the plane, I felt that I was home. I have never lost that feeling”. So says our writer in Greece, Lynne Evans. Here is her story.

At that time the airport was in Glyfada, a southern suburb of Athens. Smog covered the city, but that didn’t matter to me. This was home. Now Athens is much less polluted, there’s a ‘new’ international airport at Markopoulo and there are impressive redevelopment plans for the old one. Residents in Glyfada are looking forward to their value of properties increasing because of the development.

That first Greek holiday was spent on the island of Spetses, one of the Saronic islands. After that I went to Mykonos, loved it and stayed for 18 months. I travelled around the Cyclades and adored the blue and white buildings that shimmer in the sun.

Eventually I moved to Turkey as I was offered a teaching job and needed the money, but I moved back to Greece after a few years. I love the Cyclades because of the clarity of the light. Mykonos. Delos and Ios are superb.

I have left Greece several times, but have always returned.  This time I intend to stay

I have left Greece several times, but have always returned. This time I intend to stay. The people are friendly and helpful, and appreciate it if you try to speak their language. They don’t care if you make mistakes as these are a source of good-natured amusement.

Fancy following in Lynne’s footsteps? Read the Emigration Guide to start your plans for making the move.

My new home in Corinth

For the last six years I lived in Athens, as I had work there. In the end I realised that I could write anywhere, so this year, in April I moved to a small house just outside Corinth, close to the Corinth Canal.

I realised that I could write anywhere, so this year, in April I moved to a small house just outside Corinth

I really wanted to move to the Laconia region of Greece, in the Peloponnese, but couldn’t find a property to buy. Greeks tend to hang on to their houses so that they can be passed on to future generations. Sadly this often means that they are left empty for years and become dilapidated.

I am now almost on the borders of Attica and the Peloponnese and live in a forest area, not in Corinth itself. There are tortoises in the forest that visit the garden when they need water. There are hoopoes in the huge pine trees and as I have loved these since reading Aristophanes play, ‘The Birds’. I actually saw this being performed a few years ago in the ancient theatre of Epidauros. I am in my natural element. 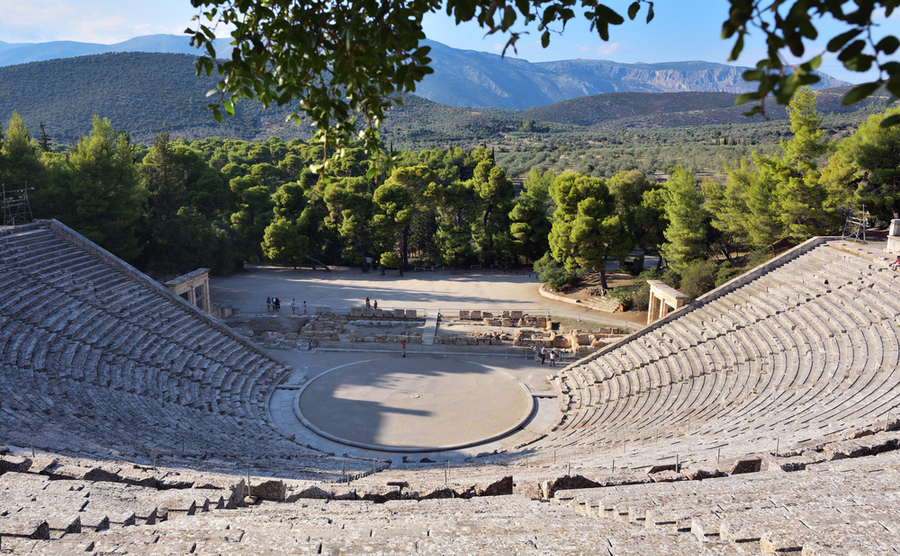 The theatre in Epidaurus, built in 340 BC

Life out of the fast lane

Now I live approximately 60 kilometres away from Epidauros, so can get to the theatre more easily than I could from Athens. The Athens and Epidauros festivals are in July and August. There’s no excuse for not seeing a play at the magnificent theatre. The August full moon lights up the stage and the pines are a marvellous backdrop. However, you may want to take a cushion to sit on as the marble seats seem hard after an hour or so!

Loutraki is around 20 kilometres from this house, and this has thermal springs. I like to visit during the week when the tourist season is over. The view over the bay is wonderful.

Do be aware though, that at the weekends in tourist areas you’ll be met by staff (usually men) employed by the local tavernas. Their technique for drumming up trade is to invite you to park in their car park, and they’re called καμακιs, which means ‘hunters.’ This is one of the few parts of Greek life I don’t like; I hate being hustled!

Why not share the cost and workload of buying in Greece, as well as the pleasure? Read Buying Abroad with Family.

To avoid the hustlers and tourists I go to a small fishing village quite close to Loutraki and have really fresh fish or seafood. That’s another great thing about living in Greece – the fish and seafood. I could happily live on it.

One thing I have learned about eateries in Greece is that the ones with no tourists, but lots of Greeks, are wonderful and good value for money. You may want to resist the urge to have the expensive fish, as it may not be as fresh as the more economical sardines or whitebait [gavros].

I live in a house that’s a little over 30 years old, so of course there are many repairs that need doing. The best way to find someone to do them is to talk with the locals. If you speak Greek it is a distinct advantage, but if you don’t, there’s always a local that speaks English. Such people are keen to help with translations, and it gives them a certain kudos, and they are very helpful.

A word of warning though; Greeks don’t live in the fast lane in the villages. You need patience to survive and keep your equilibrium!