Where are the best places to live in the Peloponnese?

Do you like living in a city, or would you prefer a country location? Do you think you might like to live in a Greek village? Would you like to live away from other people in the countryside? What do you ideally need to have for a happy life [fast internet perhaps]?

I recently moved from Athens to the countryside, 20 kms from the town of Corinth. You know, famous because of St. Paul’s letter to the Corinthians. It’s just over an hour’s drive or train ride away from the hustle and bustle – and noise – of Athens. Trains run every half an hour to Athens.

I live in what was once a forest area and share the property with wild tortoises of various sizes, birds and other wildlife, including moggies. It’s very quiet and peaceful, but I realise it wouldn’t be everyone’s cup of tea [or coffee, as Greeks tend not to drink tea.]

There are beach houses and villas for sale, or apartments in the town, which has a population of around 30,000. There’s plenty of choice, and prices are cheaper than those in Athens.

Read expert tips from industry insiders in your free Negotiation Guide to find out how to get the best possible value for your budget. 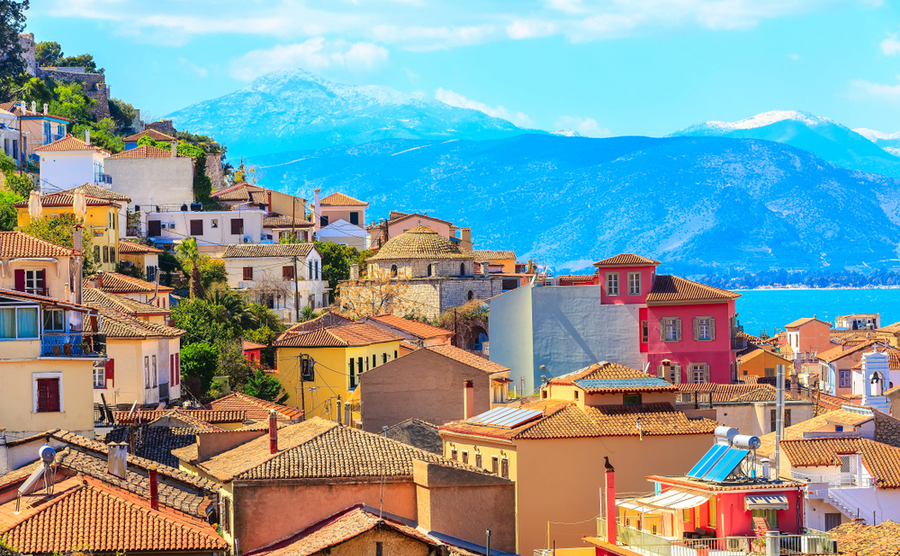 Nafplio is one of the most beautiful towns in the Peloponnese.

Property prices in and around Corinth

House prices are cheap here, although you do need a good lawyer and notary to steer you clear of potential pitfalls. I was lucky, as my lawyer friend knew notaries in the locations I tried to buy a property in.

My small, one-bedroom house was on the market for 30,000 euros, but we got it much cheaper. This meant that we could afford the renovations necessary for us to live in it. It has a huge garden and labour is cheap, so I can pay an occasional gardener to maintain it.

You can still find cheap property of all types in the Corinth area as there are few international residents outside of Athens. That means that property is not snatched up as soon as it comes on the market.

You can still find cheap property of all types in the Corinth area as there are few international residents outside of Athens. That means that property is not snatched up as soon as it comes on the market. The lack of foreigners also makes for cheaper property prices. Of course, there are more luxurious properties for sale, with and without swimming pools.

Of course, because the property was so cheap, it needed repairs, which are still being done. To begin with the estate agent was our go-to person to find plumbers, tilers and so on.

Corinth, situated on the Gulf of Corinth, has a town beach as well as its history and is the gateway to what has become my favourite area of Greece – the Peloponnese. If you drive to Corinth you have to go over the world-famous Corinth Canal, built in the 19th century.

Other places of interest are Ancient Corinth and Akrocorinth perched on a hilltop commanding a wonderful view of the Gulf of Corinth and the plain.

Patras is another fantastic location for property buyers. As Greece’s third-largest city, it’s perfect for anyone looking to make the move but still have a good number of job opportunities.

You can get to Patras by train, bus or car. The trains go every three hours and a ticket costs between 7 and 10 euros. The journey from Corinth to Patras takes about an hour and a half. You can drive from Corinth to Patras in about an hour and a half too. However, factor in some time for delays if you have a ferry to catch. Ferries from Patras go to Italy as well as to locations in Greece.

Patras is perfect for history and architecture fans; have a wander around to see the Italianate architecture. For a bit more of a lively atmosphere, don’t miss the Carnival weekend, as Patras is home to the biggest Carnival parade in Greece. This rivals Carnival in Venice. The city is steeped in history, and you can visit its medieval castle and the cathedral of Saint Andrew, Aghios Andreas, the patron saint of the city, who, according to tradition was crucified in Patras. The cathedral was only built in the 20th century, although it was built in the Byzantine style.

Read our Healthcare Guide to accessing medical attention in Greece compared to 10 other countries.

The New Archaeological Museum is worth a visit as it has artefacts from as far back as prehistoric times, up to the Byzantine period. If you are interested in Roman architecture, visit the Odeon and the agora, which are connected. Destroyed by a series of earthquakes, the Odeon has been lovingly reconstructed, and the citizens of Patras are justly proud of it.

The best thing for me about Patras is the food. The city has an annual street food festival in October, when you can eat as much as you want without damage to your wallet. There are many restaurants, tavernas, trattoria and so on, so if you are fed up with Greek cuisine, you can try something different.

If you love wine, a visit to the Achaia Gustav Clauss winery is not to be missed. Try the fortified sweet red Mavrodaphne wine, a speciality of this area. Personally I don’t like it, as I prefer dry wines. However, you might enjoy it.

Few people looking in the Peloponnese go to Nemea, but they are really missing out. It’s a pretty, typically Greek town, full of history. Tourists go there to see ancient Nemea, famous for its revived Games and the Temple of Zeus. The site of ancient Nemea is really big, with a modern museum full of artefacts from the archeological digs. 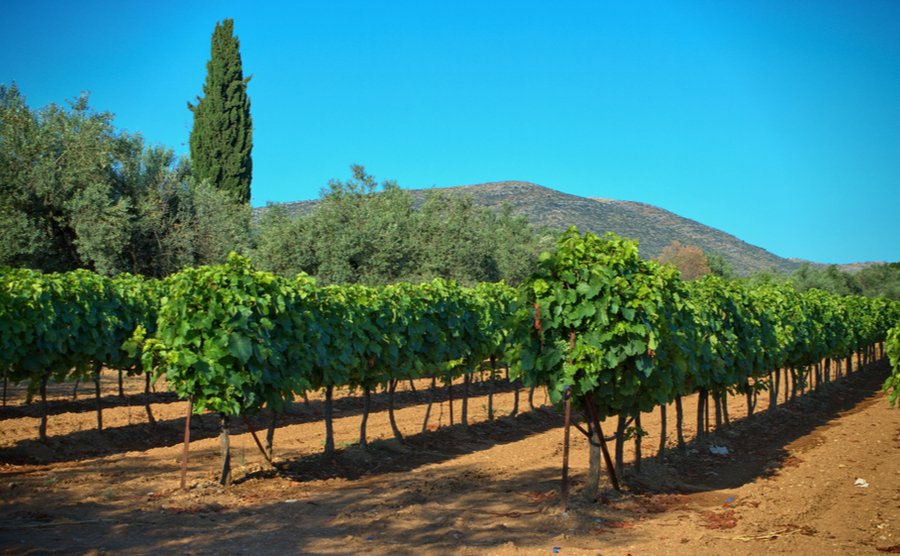 Grapevines on the Nemea wine roads.

The ancient Nemean Games were revived in 1976, and like the Olympics, they happen every four years. The next Nemean Games are to be held between the 26th and 28th June in 2020. It was in Nemea that Hercules killed the lion; this was his first labour.

There is a modern wine route that you can follow if you have your own transport, or if you enjoy a really long hike. I particularly like the red Nemean wine which has been made in the area for more than 3,500 years. Try some if you are in the area.

Ancient Kleones is also in this area, so if you enjoy exploring ancient sites the northern Peloponnese is a good place to base yourself. Achaeias Kleones is about 8 kilometres from Nemea and 14 kilometres from Corinth. It has a population of around 1,000. Once again, anyone living in the region will be able to visit any of the wineries to sample the local wines of the area – one of the joys of the Mediterranean lifestyle!

It’s about 60 kilometres to Nafplio from Corinth by road and it’s a really beautiful place to live. I especially like it in June when the old narrow streets are full of different colours of bougainvillea. These form natural arches over the streets, giving pedestrians some much-needed shade.

Nafplio was the first modern capital of Greece, so has imposing neo-classical buildings, including the old parliament building. It’s a coastal town which is overshadowed by the Palamidi, used as a prison after the War of Independence. Heroes of the revolution, which began in the Peloponnese were imprisoned in it, as well as in the Bourtzi castle on an islet close to the harbour.

Need to raise a little more money to buy your dream home in Greece? Read how in our new guide, How to Pay for an Overseas Property.

There’s always something to see and do in this town – even if it’s raining. The Kompoloi [worry beads] Museum is the place to go if you are in to worry beads, and if you aren’t, you can take refuge in a café-bar or ouzeri. Try tsipouro, the Greek hooch which is vaguely similar to the more famous ouzo. If you don’t like the taste of anise, you can sample a plain one [or two].

I think it’s best to eat fish near to the sea, and I love the tavernas just outside the town, especially Roulis’ in Nea Kios. They have mussels in their shells with a mustard sauce as well as the usual fish and seafood dishes. I’ll never forget the time a friend laughed while trying to eat a mussel and sprayed me with the sauce.

You never know what you might find in the town. One friend of mine found a small kitten in the back streets of Nafplio and took it back to Athens. Now, years later, it’s a very healthy, large cat which walks happily around Athens on a lead.

The ancient theatre of Epidauros is still famous for the plays enacted there during the Athens and Epidauros Festival, in both locations. It was built close to the sanctuary of Asclepius, the god of medicine. 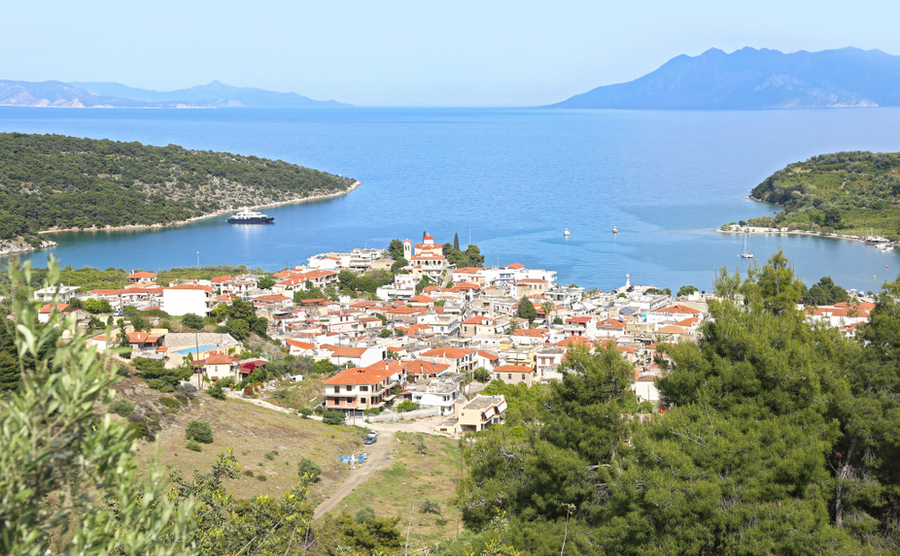 The beautiful waterfront town of Epidauros.

The ancient theatre was built so that the people who visited the sanctuary could have entertainment while awaiting or undergoing treatment. Today visitors to the theatre can stay at Palaia Epidauros or Neo Epidauros. These villages have hotels, so visitors to the theatre don’t have to drive back along the road to Corinth with its steep drops and treacherous bends. There’s also a sunken city to explore just off the coast if you snorkel.

It’s almost November, but we still go to the beach and swim. It’s currently sunny and 23-24 degrees Celsius. It is about 10 degrees cooler at night. It should be a tad cooler, but no one is complaining. Follow this link for more information about the climate of Corinth throughout the year.

The northern Peloponnese is a fascinating area and one which has not yet succumbed to mass tourism.  Go while it is still relatively unspoilt to discover the authentic Greece.