5 Greek islands with a buzz all year-round

Many of us first fall in love with the Greek islands on our summer holidays, but the smaller tourist islands do often close down in winter. So if you’re looking for somewhere with that year-round buzz, where are the best places to start?

The Greek islands tend to close down in winter, meaning that getting to and from them is problematic because of the weather and fewer transport possibilities. However, the most popular tourist places, Mykonos and Santorini, never close. It’s a good time to visit both in winter, as there are fewer people in the narrow streets. There seems little point in dwelling on these islands, so I am going to suggest others which are open for business all year. Of course, they are quieter than in summer, but there will be nightlife and local events to keep you entertained.

If you look through travel sites or brochures, you will find the most popular Greek islands for tourists from the UK, and generally speaking, these will be in business in winter as well as summer. While there may not be direct flights to them from the UK in winter, there will be domestic flights and ferries from mainland Greece.

Don’t leave yourself not being able to afford your dream home just because the currency markets moved against you. Find out how to make safe international transfers in the Property Buyer’s Guide to Currency. 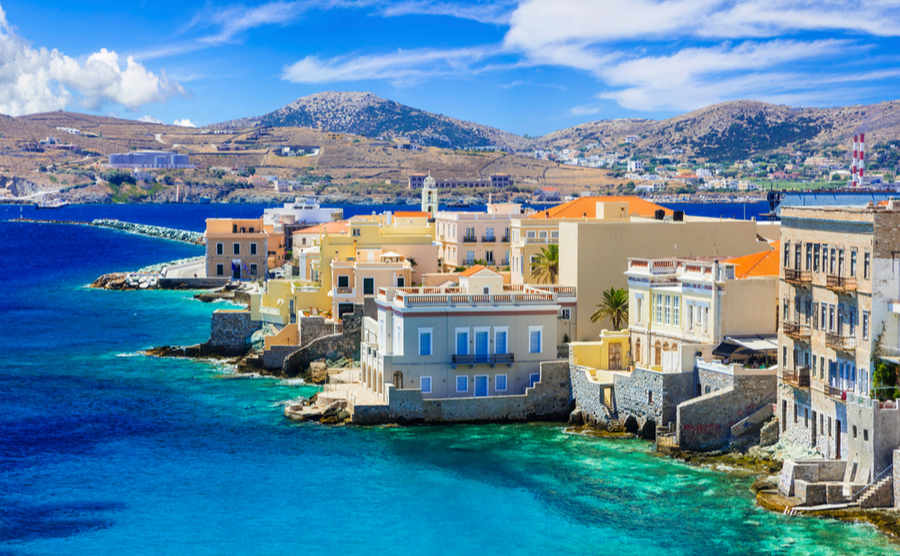 Syros is a popular island with the British.

Syros is the administrative capital of the Cycladic group of islands, with Ermoupolis the main town and the island’s capital. Unlike the rest of the Cyclades, Ermoupolis has elegant neo-classical buildings, but move away from here and there’s no doubt that you are in the Cyclades with the whitewashed houses of Ano Syros with their blue shutters, accessed via narrow streets.

Syros has a thriving cultural scene, as you can imagine when you see the impressive 19th century Apollon Theatre. In winter there is a range of programs for your entertainment, and it’s worth going to the opulent theatre at least once.

Ask about the location of the factories that make Turkish Delight, loukoumi, and watch it being made. Syros is famous for it.

Kini is arguably the best beach on the island and it is certainly one of the most picturesque of Syros’ villages. From Kini, take a boat to one of the beaches which are virtually inaccessible by land, if the weather permits. You may want to pack a picnic for this trip. The sunsets and sunrises are beautiful from here too.

Property prices on Syros vary, but you can find 2-bedroom detached houses for around 35,000 euros in the back streets of Ermoupolis, although you will probably want to do some renovation work. A villa in Ermoupolis overlooking the sea will set you back around a million euros.

Syros has a domestic airport just 2 kilometres from Ermoupolis, and it’s only half an hour’s flight from Athens.

You can get to and from Syros by ferry, which takes around 3 and a half hours, or take the SeaJet service for a trip of only 2 hours. Check the timetables for details. 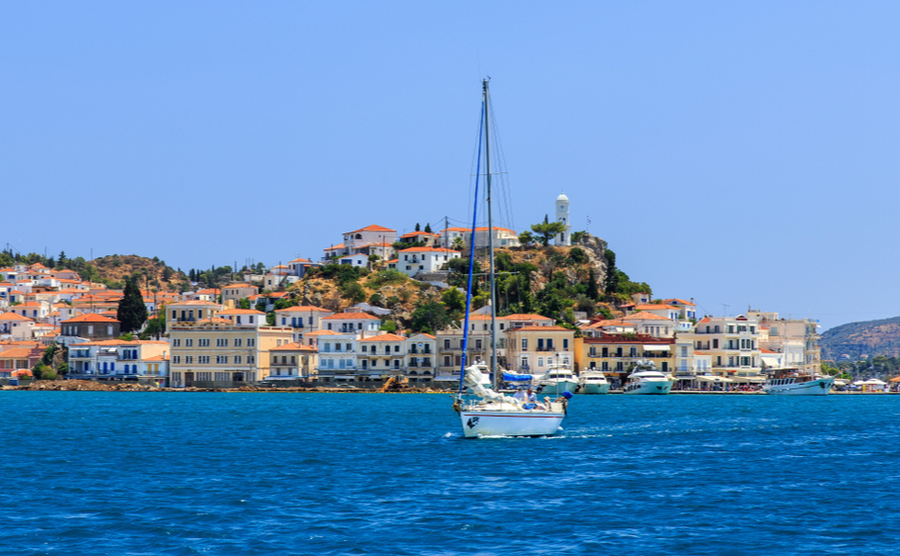 The idyllic island of Aegina.

Aegina is one of the Saronic islands and famous for pistachio nuts. Legend has it that all pistachio trees originated on this island. That means that the nuts you buy here in winter are fresher than packaged nuts you can get on the mainland. You can also buy mastica at the kiosks in the harbour. Take a horse and carriage along the waterfront for some leisurely views and photos.

The area close to the harbour is always busy, although if the wind is strong, you can seek shelter in one of the little streets adjoining the main square.

You can’t go far in Greece without being reminded of its rich history, and on Aegina you can explore the ruined Temple of Aphaia, dating back to around 500 BC. There’s also an archaeological museum with some interesting artefacts.

If beaches are more your thing, Aegina doesn’t disappoint. The most popular one is at Aghia Marina, although my favourite is at Perdika, mainly because of the fresh fish and seafood restaurants there.

Aegina is very close to Athens, with ferries, catamarans and the Flying Dolphins linking it to the mainland. Depending on how you travel, it will take between 40 minutes and 1 hour and 10 minutes to get there from Piraeus. It’s a good commuter base.

A modern apartment will set you back around 100,000 Euros, although you may be lucky and find something a tad cheaper. Because the island is within a commute of Athens, prices are high. A villa with a pool can be purchased for a little under a million, with detached houses start at around 250,000 for one with 2 bedrooms.

Download your Negotiation Guide to find out how to get the best possible deal for your budget. 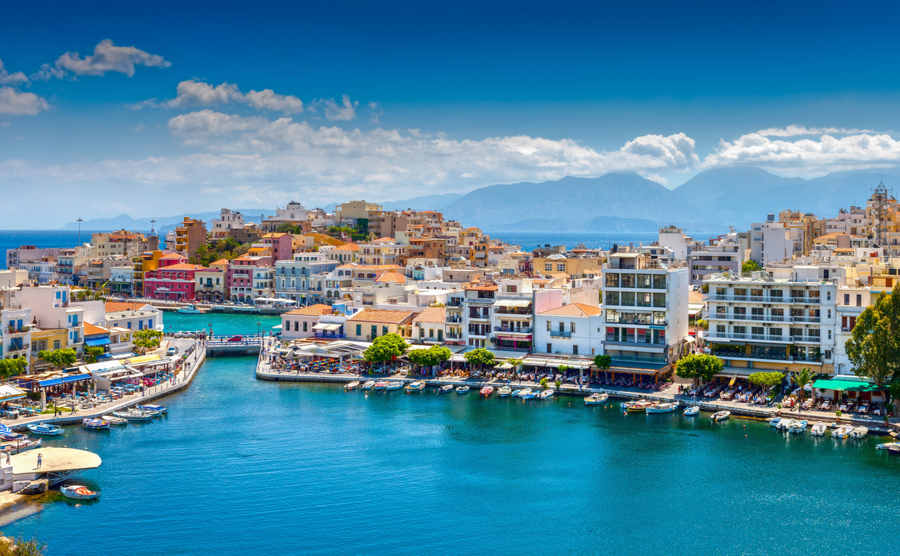 Heraklion, the capital of Crete has a student population which means that it’s lively – there are lots of things to do.

Crete is full of contrasts, with clubs, world-famous archaeological sites, think the Minoan palace of Knossos, beaches and world-class cuisine. There’s Mount Ida to climb, as well as places of myth and legend to explore.

It does get cold in winter, around 11C in December and January. Perhaps a hike through the Samarian Gorge could warm you up.

You’ll find somewhere on the island to love, whether it’s near Chania or Ierapetra, and then you’;ll need a property that suits your budget if you plan to live on this island.

Depending on which part of Crete you want to live in you should budget for spending around 200,000 euros on a detached house or villa in need of some renovation. If you want a property with a pool expect to pay around 500,000.

There are international and domestic flights to Crete, with a flight from Athens taking around an hour. Ferries take about 9 hours to get from Piraeus to Crete, depending on the route. There’s one thing I love about taking a ferry and that’s watching the flying fish and dolphins that often follow in its wake. However, it’s quicker and easier to simply get on a plane. 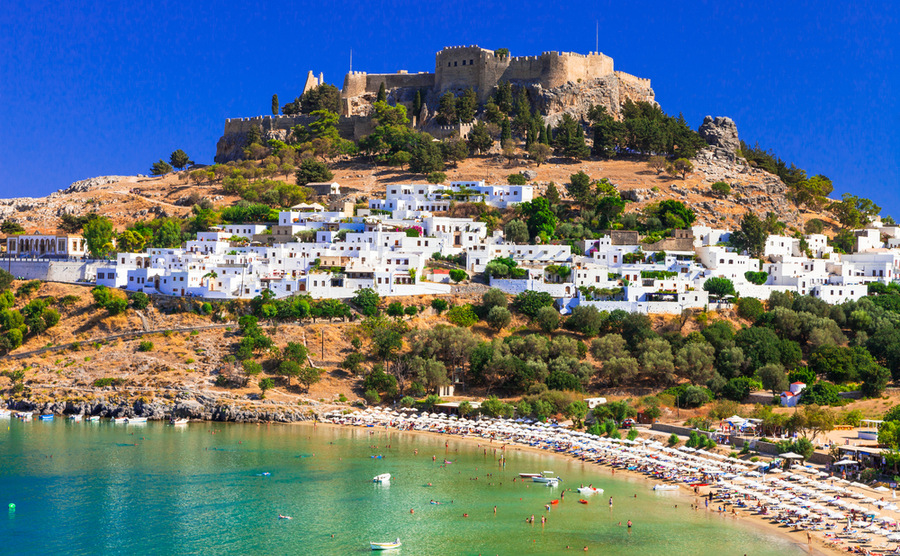 Rhodes is another island that is open all year round. The old town and harbour are wonderful to explore and the villages dotted all around the island of Rhodes are welcoming.

Rhodes Old Town is now a UNESCO World Heritage site with buildings depicting its colourful history. In fact, there’s so much to see and do on the island, you won’t be bored, as you never know what’s around the next corner. Kids and adults love visiting the Palace of the Grand Master, built in the 14th century on the site of the Temple of Helios, the Sun God is not to be missed. The Palace was reconstructed in the early 20th century by the Italians who were in control od Rhodes at the time.

Visit the town of Lindos, if you can drag yourself away from Rhodes town and Mandraki harbour, and see the acropolis, which was built in the Hellenistic period, as was the Acropolis of Rhodes. You may be lucky enough to see the Darma-Darma deer which are unique but not indigenous to Rhodes.

If the weather turns bad [it won’t last long] visit the 14th century Turkish baths in Rhodes town, or the art gallery, or the Aquarium. There are the ancient sites of Ialyssos and Kamiros to explore too. If it’s warm and sunny don’t miss Butterfly Valley, which has many plane trees and streams, as well as the butterflies which breed there.

You could buy a 2-bedroom flat in Rhodes town for 65,000 euros, or a 3-bedroom detached house in modern Ialyssos for 220,000 euros.  Of course, there are luxury villas outside the main town which can be purchased for a couple of million euros. There are all types of properties at various prices throughout the island so if money is no object, you can have the property of your dreams.

Rhodes has an international airport which caters for domestic flights as well. Flying to Rhodes is probably your best bet, as ferries take between 15 and 19 hours, but can take longer. Having said that, you can get a ferry to Rhodes from Italy and Turkey as well as from mainland Greece. Ferries dock at the new port, not Mandraki.

If you have questions about living in Greece, give the resource team a ring on 020 7898 0549 or email greece@propertyguides.com. 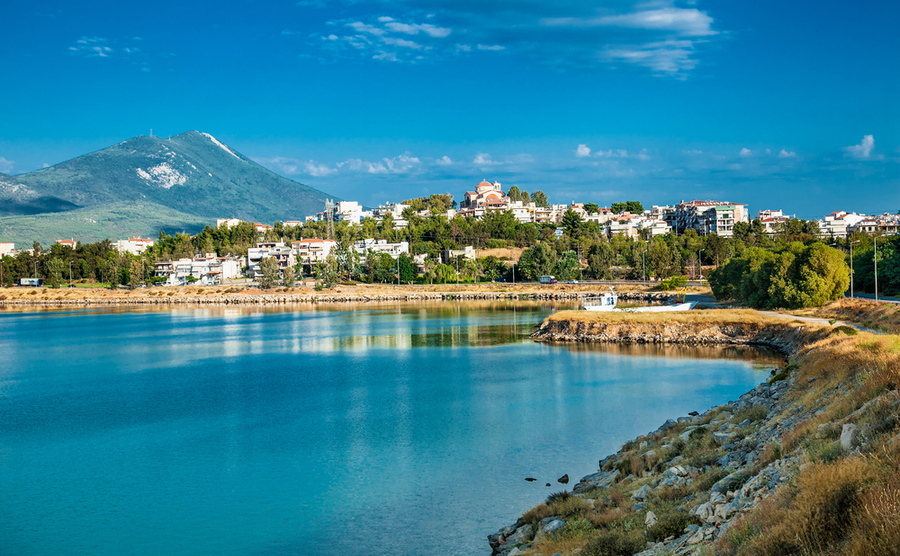 The island of Evia is something of a well kept secret, with fewer foreign buyers than you would otherwise think.

For some reason, not many Brits seem to find their way to Evia, although its easily accessible from Athens [see below]. It’s the second largest Greek island, after Crete.

One of my favourite places on the island is Aedipsos, famous in antiquity because of its associations with Hercules who bathed in the hot thermal waters after completing a labour. Now there is a spa hotel which utilises the healing mineral waters.  Aedipsos is busy all year round, although the tourists are mainly Greek, which is why I like it.

Chalkida is buzzing with life all year with people visiting it to see the unique phenomenon of the changing sea currents. They change direction every six hours. This is best viewed from the old bridge which links Evia to the mainland.

While you are in Chalkida, take the time to stop at a café near the seafront or eat fresh fish and seafood near the sea.

Visit the mosque built under Ottoman rule on Kotsou Street and don’t miss the Red House or the House of Statues, both dating from the end of the 19th century.

There are monasteries to visit, but remember to cover your limbs and be respectful.

You can’t miss the castle, perched on top of Fourka hill. This was completed in 1684 and has been guarding the town since then.

Evia has many small villages for you to explore, so take your time and find one which really appeals to you.

A 2-bedroom flat in Chalkida costs around 75,000 euros, while a 3-bedroom detached house there might be purchased for around 220,000 euros. Prices vary according to where they are located. Some properties are on unnamed roads, which probably means they are not included in the city’s plans. These are cheaper than properties which are on the plans. I live in just such a house on the mainland.

Hopefully you will be rewarded with your dream house after your search. Good luck.

There are high-speed ferries as well as the usual sort plying the waters between the Greek mainland and Evia. The conventional ferries are cheaper.

Depending on your destination on Evia, you will be able to leave the mainland from Rafina for Marmari, Glyfa [central Greece] for Agiokambos or Arkitsa for Aedipsos and northern parts of Evia.

You can also get to Skyros, Alonisos, or Skopelos from theport of Kymi on Evia.

Buses from Liosion bus station will also take you to Evia.

As mentioned above, you can drive to Chalkidi via the new bridge and a train can get you there, although you will have to change trains if you take the train at Piraeus or Athens international airport.

It’s easiest to drive to the island, or take a ferry.

Feeling tempted by any of these islands? Download your free Greece Buying Guide below to find out how the purchase process works, and don’t hesitate to get in touch with our Resource Centre if you have queries. Simply email greece@propertyguides.com or ring us on 020 7898 0549.