Head inland for a change and discover Paphos Forest, where rustic villages and ancient monasteries can be found among scented trees, winding rivers and mountain slopes.

Paphos is famous for many reasons, most notably for being the legendary birthplace of Aphrodite, the Greek goddess of love, beauty, pleasure and procreation – not a bad gig. The city itself is popular with expats and holidaymakers alike, thanks to its swish marinas, pristine beaches and romantic history.

But if you look at a map of Cyprus you’ll see a large swathe of green to the east of the city that offers visitors and homeowners a rural alternative to the more traditional sandy Mediterranean appeal. Located on the north-western slopes of the Troödos Mountains, Paphos Forest stretches over 70,000 hectares (that’s 270 square miles) from sea-level right up to the tip of Tripilos mount (1,350 metres). Home to a diverse collection of flora and fauna, the forest is also a great spot to visit for a spot of recreation in the great outdoors.

The perfect place to explore as we celebrate the United Nation’s International Day of Forests in March, I’m sure you’ll agree.

Located on the north-western slopes of the Troödos Mountains, Paphos Forest stretches over 70,000 hectares from sea-level right up to the tip of Tripilos mount

What better way to discover this beautiful part of the island than donning your walking shoes and heading for a good old hike through the cool shade of the forest and its diverse range of trees. If you’re heading out on a house-hunting trip to Cyprus, try to grab a couple of spare hours to try these nice easy trails:

• Starting at Selladi tou Stavrou, Moutti tis Stavrou is a short (2.5 kilometres) circular trail through pine forest, peppered with colourful flowers, offering spectacular views towards Chrysochou Bay and the eastern part of the Akamas Peninsula. Remember to keep right at the crossroads 500 metres into the trail, otherwise you’ll end up at a helicopter landing area.

• The Chorteri nature trail passes through Calabrian pine and the endemic shrub Golden oak, close to the Stavros tis Psokas forest station and takes around three hours to complete. Take in the excellent views of the Stavros Valley and get your camera ready for a snap with the Cyprus mouflon – AKA wild sheep. 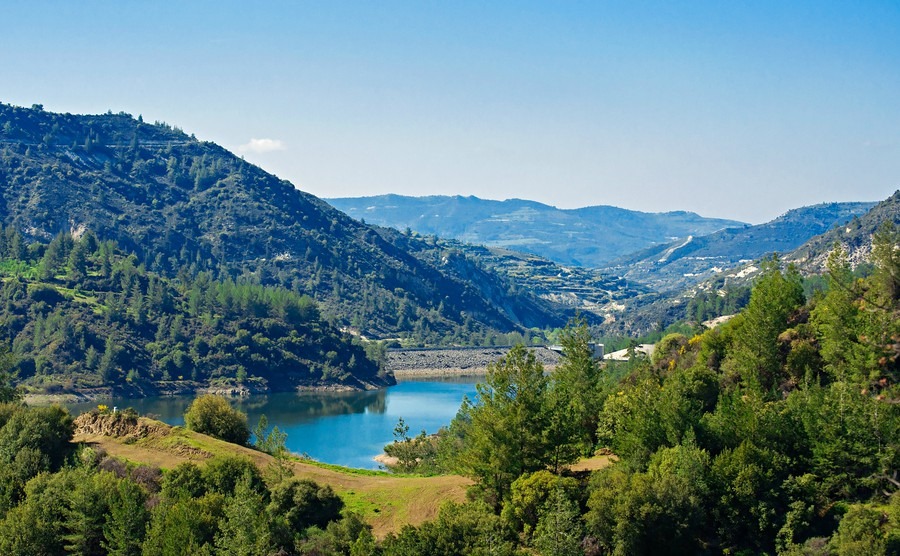 Paphos Forest certainly isn’t cluttered up with civilisation, but that’s what helps it to maintain its rural charm and beauty. The few rustic settlements that are dotted in the mountains are worth a visit, however.

Located on the western fringes of the forest, about 35 minutes from Paphos International Airport, is Pano Panagia – also known as Panayia – home to the historical Chrysoroyiatissa Monastery, which traces its history back to the 12th century and stands at an altitude of 2,700 feet.

If you delve deeper into this vast expanse of countryside you’ll find the picturesque mountain villages of Kampos, Tsakistra and Mylikouri. If you can’t get enough of monasteries you’ll be pleased to hear the latter is situated just to the south of the Kykkos Monastery, the burial site of the first President of Cyprus, Archbishop Makarios III.

The main village within the northern boundaries of the forests is Gialia, and yes you’ve guessed it there’s a monastery. It sits on either side of the banks of the Gialias River, just a short drive from the coastal town of Pomos, on the shores of Chrysochou Bay.

Anyone for a picnic?

If you want a break from exploring this wonderful part of the island head to Stavros tis Psokas in the heart of the forest for a relaxing picnic. A great spot if you’ve worked up a hunger on the aforementioned Chorteri nature trail. Set among scented pine trees the Stavros tis Psokas picnic site is situated near the headquarters of the Paphos Forest Division – a former monastery would you believe – and is one of the most beautiful spots to enjoy a spot of alfresco lunch on the island. There’s even a camping site if you really want be at one with nature.

If preparing a picnic isn’t really your scene, there’s a handy little café on site where you can grab a bite to eat and a refreshing drink. Once you’ve refuelled it’s time to start exploring again, the stunning Cedar Valley is only a short drive away.