Moving with children to Portugal

Moving with your children to Portugal could be the best thing you ever do as a family. It’s a serious life change with plenty of planning involved. But as you’ll know if you know Portugal, this is a warm, healthy, hard-working country that loves children. This article will help you understand the reality of moving with children to Portugal and help you make the right decisions.

If you thought Portugal was just for retirees, think again. Fewer than 40% of the people who move from the UK to Portugal are over 65, and the majority, 56%, are between 15 and 64. One in 20 British citizens in Portugal are under the age of 15. So plenty of people do believe that moving with children to Portugal is a good choice. Here is why.

Portugal is a wonderful place to bring up children. Children are loved and (often quite literally) embraced in the country! Kids of all ages are frequently seen out and about late at night – at restaurants and town festivals. The culture is the polar opposite of one where youngsters are “seen and not heard.”

This largely results in children who are mature and well rounded as they grow up. They’re treated like adults and tend to behave more like them too. This doesn’t mean there aren’t some social problems, or that children in Portugal are immune to obsessions with Fortnite and Instagram. However, it’s often refreshing to see how kids and young adults behave in Portugal.

If you’re buying a family home in Portugal, make sure you get the most for your money with our guide, How to Negotiate Abroad.

I often share an anecdote about moving with children to Portugal from shortly after I relocated to the Algarve, I noticed a group of “youths” around a large, upended recycling bin on a roadside. Jaded by years of UK city life, I was interested to know what they were up to. My heart was immediately warmed when I realised they’d teamed up to carefully put the receptacle back up the correct way!

Why Portugal is great for children

But while moving with children to Portugal doesn’t mean they’ll become immune to the attractions of social media and Love Island, the lifestyle of kids in Portugal is more “outdoorsy”. It’s more like the life their parents remember, and wish their children could enjoy too. They can! 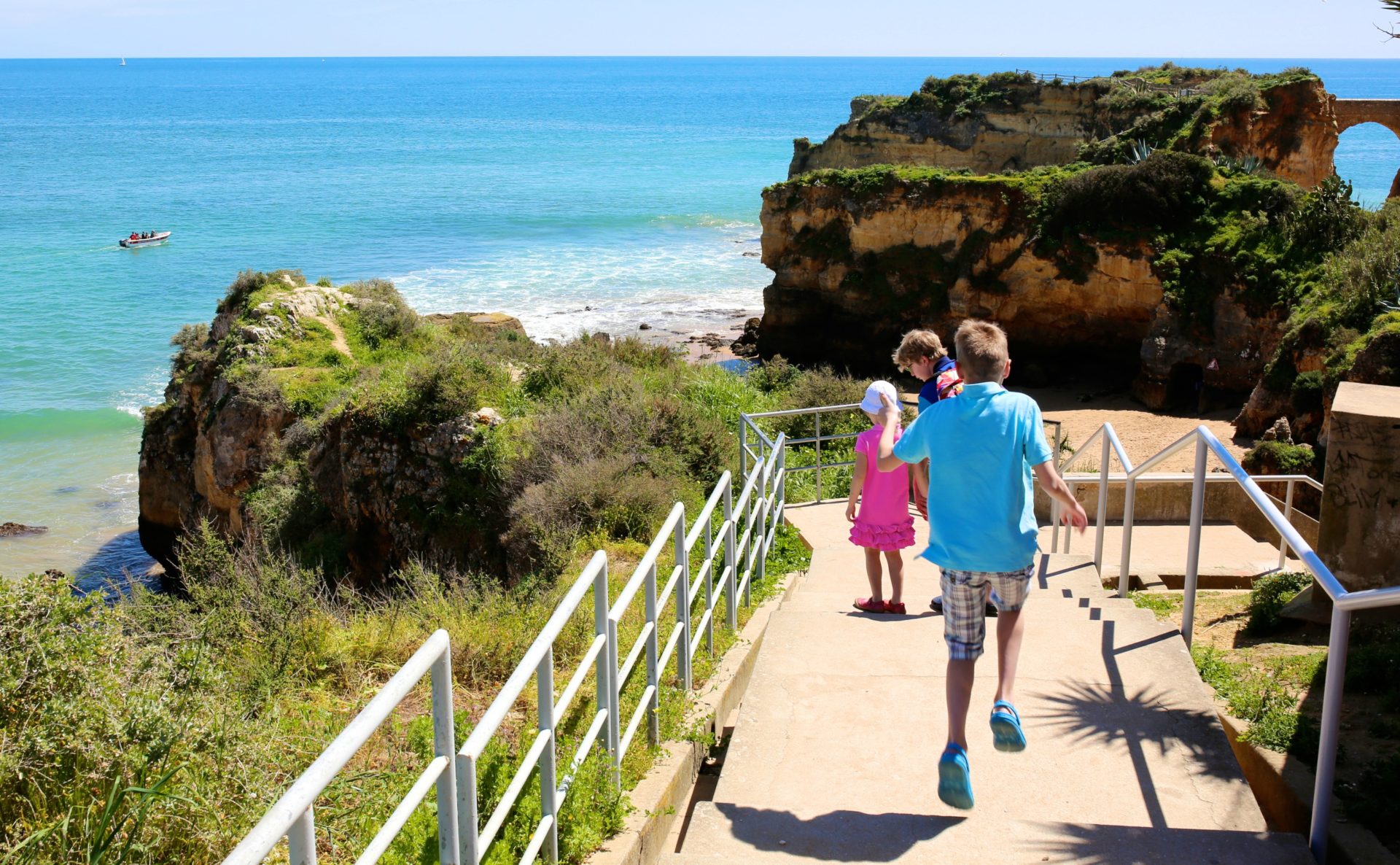 The climate obviously helps with this. For much of the year, children have access to beaches and outdoor spaces. Furthermore, there are actually facilities for them. This ranges from loads of playgrounds for toddlers to skate parks and floodlit football pitches for teenagers.

As children grow into teenagers and beyond, it would – again – be unrealistic to say that they’re immune to temptations and experimentation. However, binge drinking, for example, tends to be what tourists do in Portugal, not locals. Let’s not generalise too much, but you may well worry less about your children in Portugal than you would elsewhere.

Statistics from Unicef back this up. Portugal ranks just above the UK for general child wellbeing. Furthermore, Portugal scores particularly well in the ‘risks and behaviours’ category.

Obviously, a key concern about moving with children to Portugal is their education. Thankfully, there are plenty of options, including international schools. These are often “top-end” institutions that rival the UK’s public schools (both for facilities and fees). However, there are also some private education options that are slightly more affordable.

An important thing to remember, obvious though it may sound, is that English isn’t Portugal’s first language. While English is taught in schools, Portuguese is the main language in use. This will have a significant impact on the decisions you make for your children’s future.

It’s well-known that toddlers and very young children will tend to absorb language very quickly. If you place a toddler in a Portuguese pre-school (or even a primary school), the chances are they’ll pick up the language quickly. By the time they’re five or six, they’ll be correcting you on your faltering attempts at Portuguese. They shouldn’t struggle as they move up into “big” school either.

However, things get more complicated with older children. Not being able to understand exactly what’s going on – at an already challenging time of life – places a lot of pressure on them. The simplest solution is to do everything you can to help them learn Portuguese. It’s not so hard – just look at all the Portuguese kids who can speak English. Feel free to pay for all the apps and tutors you need – just think of the savings you’ll make on an international school fees! That way, when they start school, they’ll at least be able to read their timetable.

The alternative is to find and pay for an international school, if you’re in an area that has one. Most teach primarily in English, so going to one will feel little different to moving schools within the UK.

Ultimately, it’s all about finding a careful balance. Young children should be fine within Portugal’s state education system and integrate beautifully into local life. In the case of older children, you may have to trade off some of that integration by placing them somewhere where (initially at least) they’re primarily mixing with other expat children. Out of school clubs can help them to still get involved in local life.

Pre-school in Portugal could cost you far less than you might expect. Undoubtedly, there’s some luck involved in what facilities you have near you. However, plenty of towns have council-run facilities that are modern and well subsided. Fees are often means-tested. This means families with higher incomes pay more. However, putting a toddler in full-time childcare will rarely cost anywhere near as much as it would in the UK, even if you have a high income. 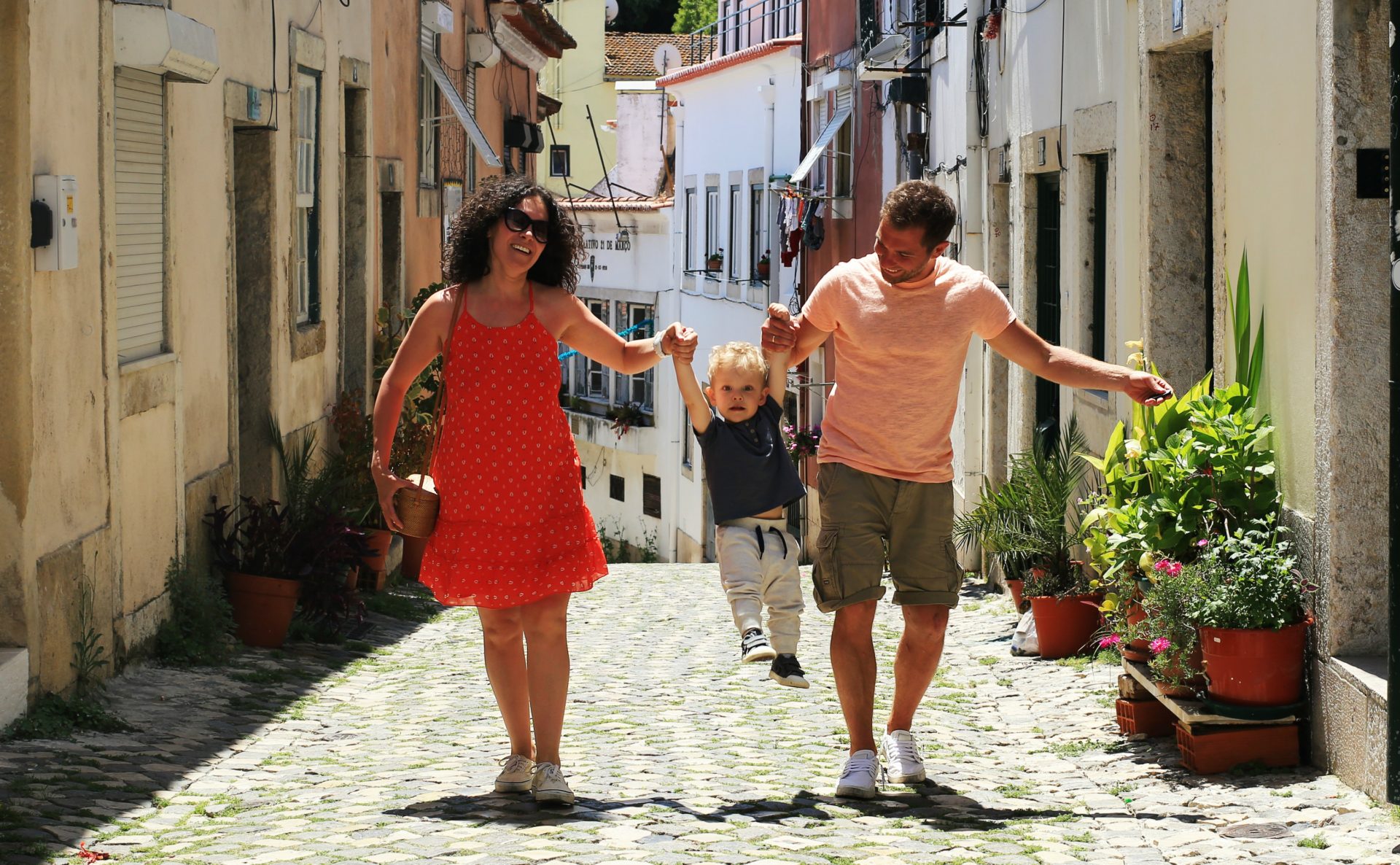 A move with children to Portugal is a big step, but luckily there are plenty of quality options for pre-school, primary and secondary school.

Longer days are common as well, with children remaining at school until around 16.45 once they’ve finished their primary years. This is another way in which it can prove easier to juggle work and childcare in Portugal than in Britain. These longer hours are commonly available in preschool settings.

Many people who move with children to Portugal take advantage of the local state schools. They accept children through to the age of 18. Remaining in school until then is usually compulsory.

Basic education begins at six years old. It’s divided into three cycles, 1º, 2º and 3º Ciclo, and lasts nine years. Secondary education begins at 15. At this secondary point, pupils can choose to branch out into academic specialisations such as social science, visual arts, or science and technology. Alternatively, they can move into learning paths suited to vocational careers, in subjects like sports, marketing or civil construction.

Now the schools are sorted out, read about Portuguese healthcare!

English lessons are taught throughout and are compulsory up until 10th Year and, in practice, fills the ‘foreign language’ requirement in 11th and 12th Years. Combined with plenty of exposure to British and American TV shows, a fair proportion of Portuguese youngsters can speak decent English by the time they finish school.

If you choose to send your children to an international school, the curriculum may differ. Some teach the UK curriculum (including IGCSEs), or even offer a choice of the Portuguese or British curriculum.

Here are a few examples of the kind of international schools you will find if you move with children to Portugal:

The Nobel International School is located in Lagoa, in the West Algarve. Its impressive site is along the EN125 Algarve road.

The school has been in operation since 1972, and offers education to pupils aged from three to 18. There are also summer school options available on campus.

The Nobel school has the feel of a British public school, right down to the fact that it accepts boarders. Fees are at the high end of the scale, ranging from just over €4,000 per year for preschoolers, up to over €15,000 per year for A-Level students. These are day school fees, not including boarding. There are also additional costs for school meals, transport and special needs classes.

Perhaps unsurprisingly, results from the Nobel International School are great. Most students go on to their favoured university. It’s a great option for those that can afford it. However, it’s obviously somewhat removed from the reality of life in Portugal.

Aljezuer International School, in the inland west Algarve, is an example of a slightly more affordable international school option. Fees at the time of writing are at a fixed cost of €6,000 per year. Like many international schools, this one offers transportation from nearby towns, including the popular expat destination of Lagos.

Aljezeur International School follows the UK curriculum, with students taking international GCSEs and A-Levels. Class sizes are small, and the school advertises solid exam results. For those without the budget or desire for a “big name” school, this could fit the bill.

Lisbon boasts several top-end international schools. Plenty are dotted along the coast between the capital city and the prestigious resorts of Cascais and Estoril. These schools are popular with families from America and other nations, as well as Brits.

St. Julian’s fees begin at just under €10,000 per year, and exceed €20,000 for older students studying for the International Baccalaureate. There are over 1,000 students and unsurprisingly, for the price, the facilities are world-class. These include sports pitches of all descriptions and an art gallery in an historic building.

Moving with children to Portugal certainly requires some detailed planning. However, life in the sun can prove just as alluring for the younger ones!

The Portugal Buying Guide is designed to support you through each stage of buying property in Portugal, providing relevant, up-to-date information and tips from Portugal property experts and expats who have been through the process themselves. The guide helps you to: