Carvoeiro: a guide to the Algarve’s prettiest town

Picture-perfect Carvoeiro delivers the ideal that most people visualise when considering a life in Portugal’s Algarve: Azure sky, sparkling sea, and a perfect cove beach surrounded by whitewashed villas. In this guide, we look at the many benefits of buying a home in Carvoeiro.

Carvoeiro began to morph from fishing village to tourist town as far back as the 1960s. Unsurprisingly, many visitors fell for the area’s charms and decided to put down roots. Carvoeiro (and its surrounding area) has long been popular with a cosmopolitan selection of international residents, plenty of whom have now been established in the area for decades.

As well as conforming to “textbook Algarve” as closely as possible, Carvoeiro ticks many boxes to make it appealing as a destination for both holiday-home owners and permanent residents. Local amenities cater for both pleasure and practicality.

Find homes for sale in Carvoeiro

Getting there and around

Carvoeiro sits on the Atlantic southern coast of Portugal, where the central Algarve blends into the west Algarve. The town is just under an hour from Faro airport. Faro is served by frequent flights to and from a selection of UK airports.

If you plan on moving to Carvoeiro, a car will make your life easier. The nearest train station is at Estômbar-Lagoa, several miles to the north. While bus connections exist, including some from the airport, these often involve a mid-way change. 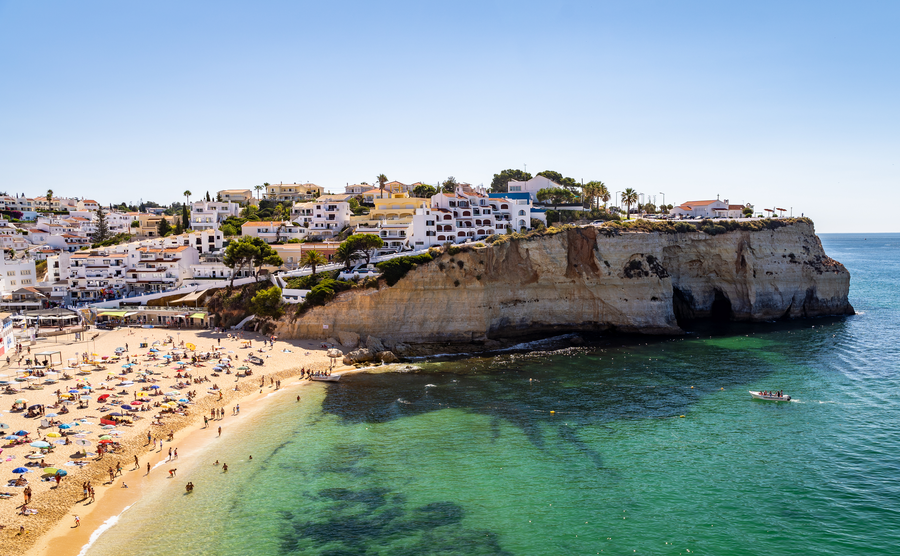 Carvoeiro’s cove beach is the inevitable focus of the town, sitting at the base of a steep hill. Moving to Carvoeiro will certainly ensure your calf muscles are kept in shape!

The town itself is home to plenty of bars, pavement cafés and independent shops. There are a few small supermarkets in town, and many more large stores in nearby places such as Lagoa. Again, a car comes in useful here.

If you’re a walker, Carvoeiro provides a paradise for your daily stroll. There are many routes out of town, on both quiet roads and footpaths. There’s also a cliff-top boardwalk with stunning views.

There are two sides to Carvoeiro: the town itself, and the surrounding area. The latter is home to some the Algave’s finest beaches. Fans of diving and snorkelling will be in their element here, with the Algar Seco cave network just a stone’s throw away from the town.

Many people who live “in Carvoeiro” don’t live in the town itself. Between Carvoeiro and Lagoa, there are several square kilometres of hills and winding roads. Brits may notice that this area bears a passing resemblance to Cornwall. Many residents choose a home in this area. Secluded villas abound, as well as several golf and leisure resorts, for those who prefer condominium-style living, with lots of on-site facilities. 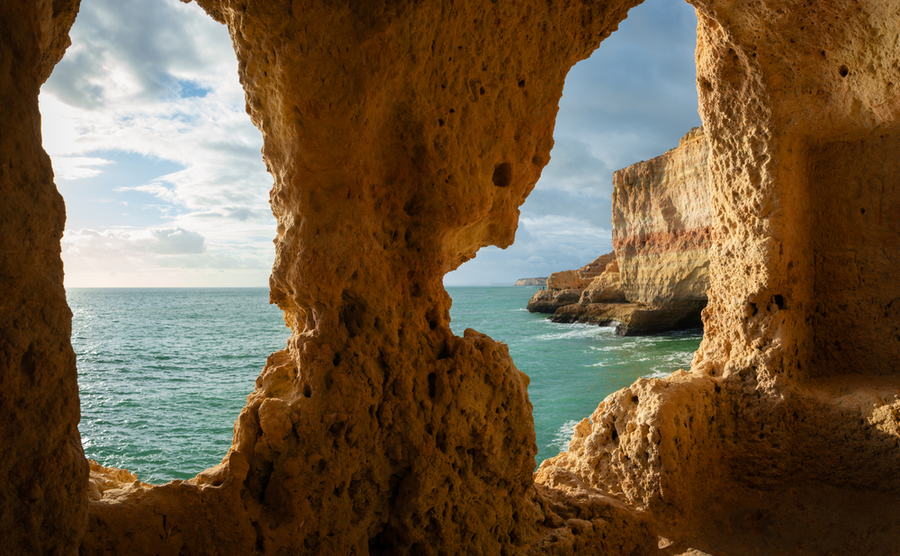 Carvoeiro is very much a resort town, but vastly different to nearby places such as Albufeira and Praia do Rocha.

It’s all rather more low-key, centred around the beach, laid-back bars and upscale restaurants. Carvoeiro isn’t a party town, although you can still expect everything to be open much later than in the UK!

While Carvoeiro doesn’t completely “close down” in the winter, this is a place that feels markedly different when the tourists leave. Some businesses do put the shutters up for a prolonged period.

Many expats relish this contrast – enjoying the throng of activity in the summer, but also the thrill of having everything to themselves off-season. However, if you’re looking for somewhere that changes less from month to month, both Albufeira and Lagos have more going on year-round.

The tourist focus at Carvoeiro, as well as an established community of foreign residents, makes this an easy place to settle, and to get by while you’re still learning Portuguese. However, it doesn’t feel too much like a British enclave, being equally popular with residents from Germany, the Netherlands, France, and further afield.

Download our Emigration Guide, with all the information you need in one place about moving overseas.

Carvoeiro has the kind of climate many people dream about: hot in summer, warm in spring and autumn, and generally quite mild in winter. Even in December and January there can be spells of warm days, when temperatures hit 20 Celsius and more.

That said, it’s worth remembering that this is not the Caribbean! You’re still on the Atlantic coast, and only the hardiest of swimmers brave the sea away from the long summer season.

During the hotter parts of the year, the extremes of temperature are often tempered by an afternoon breeze. It’s just cooling enough, without the gusts of Sagres and Lagos. 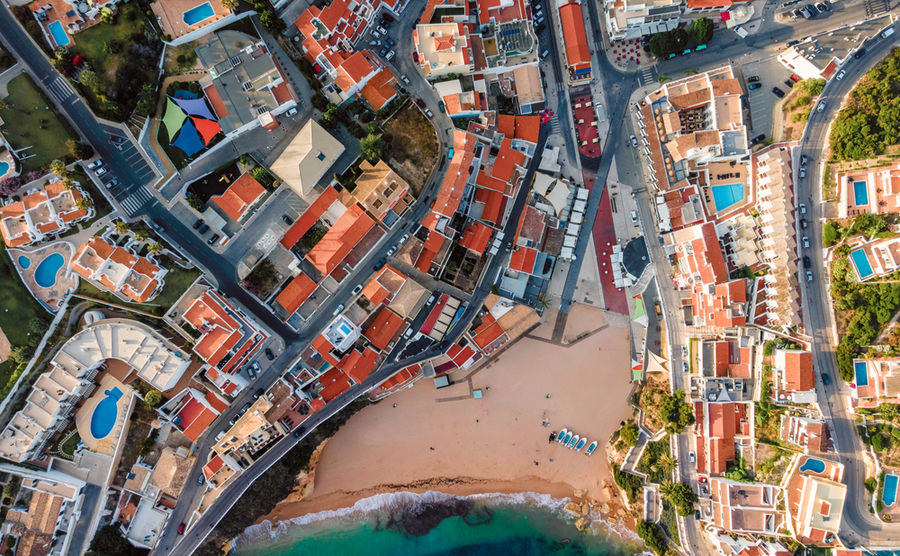 With such a perfect climate, it’s unsurprising that Carvoeiro attracts people who enjoy an outdoor lifestyle, particularly one centred around water. This area is also a golfing paradise, with most courses boasting striking ocean vistas.

On a more practical note, all the amenities you need for day-to-day life are close by. Lagoa has several large supermarkets, and the city of Portimão is just a short drive away, with all the retail parks you could ever need.

For those moving as a family, the Nobel Algarve British International School is just a few miles away, in Lagoa.

Apartments in Carvoeiro itself, and around nearby beaches, start at around €150,000. It’s worth noting that at that price, you’ll typically be looking at homes in older buildings. Like many resorts in this part of Portugal, Carvoeiro is seeing many new developments emerge, where it’s not unusual to pay €450,000 for a high-spec two-bed apartment. It’s worth remembering that more affordable options do remain!

Heading out of town, €360,000 moves you into townhouse territory, and the same amount will bag you a small villa on a golf resort. More secluded, detached homes start at around €440,000.

Carvoeiro offers a good half-way point between purpose-build resorts like Vilamoura and working cities like Portimão and Lagos. It’s calm, rather than frenetic, but that’s exactly what many people contemplating life in Portugal have in mind.