Is Australia’s wildlife really so scary?

What sort of wildlife will you encounter in Australia? Most of its nice to look at, but don’t get too close.

Due to its remote location, Australia has unique species, where you’ll find cute and cuddly living alongside some of the most deadliest creatures on the planet. Let’s take a look at the plethora of wildlife that calls Australia home.

Due to its remote location, Australia has unique species, where you’ll find cute and cuddly living alongside some of the most deadliest creatures on the planet.

The most symbolic animal in Australia, people travel from around the world to experience a kangaroo first-hand. There are four species of kangaroos in Australia; the Red, Eastern Grey, Western Grey and Antilopine kangaroo. These quirky creatures exist in almost plague like proportions in Australia, so you will see them along the side of the road, grazing on grassy fields, and at every wildlife park in the country. If you’re lucky you just might just spot a Joey kangaroo hanging around its mother’s pouch. 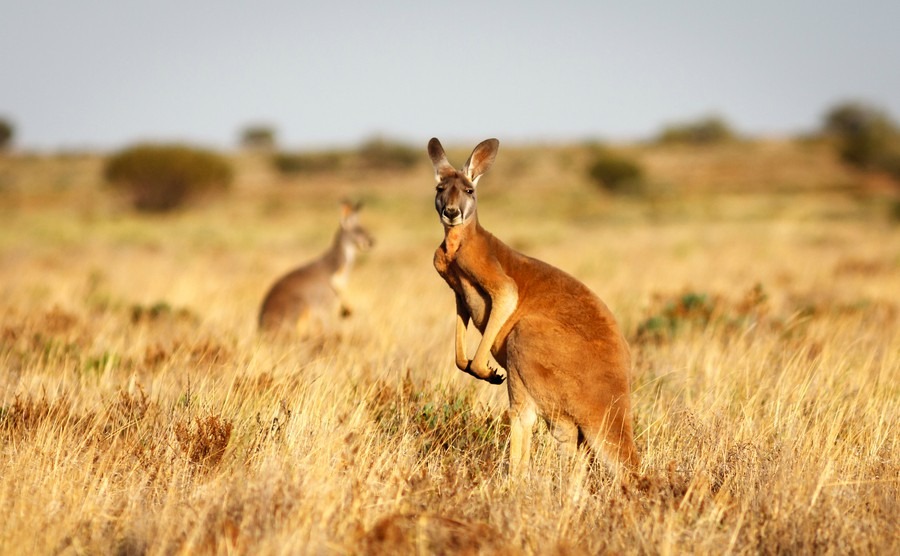 You won’t struggle to see a kangaroo in Australia

These lazy and furry creatures live in the eucalyptus trees of Australia and are nocturnal. There is a rumour that koalas get ‘drunk’ off the leaves of the trees and that’s why they always appear so sleepy. In reality, most of their time is spent sleeping so that they can digest their fibrous, low nutrient diet. They are often hard to spot in the wild, however if you visit a zoo or wildlife park you will most likely have an opportunity to get a picture cuddling a koala. Beware: although these teddy bear like animals appear cuddly and cute, they emit an awful odour from their scent glands.

In the Northern waters of Australia lurks the elusive crocodile. These pre-historic beasts spend their days in rivers and estuaries, and sometimes make special appearances in the ocean too. Crocodile hazard signs are a common sight in the waters of Northern Australia, so if you find yourself in this part of the world, make sure to stay away from the shoreline unless you know it’s safe, as you wouldn’t want to have a chance meeting with one of these creatures, that are often over 1,000 kilos.

This dinosaur-like bird is rare to see, but if you are lucky enough to spot one make sure to keep your distance. Cassowaries are highly territorial and have front claws that can do some serious damage if threatened. These gigantic birds can stand as tall as 1.5 meters. They are on the extinction list and there are only approximately 1,200 left in the wild. Residing in the rainforest of North Queensland the shy and solitary cassowary is native to Australia.

Dingos are wild Australian dogs that may have been introduced by Asians 3,000-4,000 years ago, and can be found in all parts of Australia. Extremely timid, these canines are unlikely to approach a human. In populated parts of Australia dingos are being crossed with other types of dogs, and it is likely the pure-bread dingo will eventually be bred out. Some isolated parts of Australia, such as Fraser Island, have large packs of pure-bread dingo populations. On Fraser Island, which is full of tourists, the canines have become more used to humans and are now considered a nuisance.

Snakes will feel you before they see you, so if travelling through an area with long grass, stomp around a bit to notify any snakes in the area that you’re on your way.

You’ve most likely heard about Australia’s collection of poisonous spiders. Some of the better known species include the Sydney Funnel Web, Golden Orbs, Red Backs and White-tailed spiders. Rest assured that although these eight legged friends do exist, there haven’t been any deaths caused by a spider bite recorded in Australia since 1979.

Australia has more venomous snakes than anywhere in the world, but there are many precautions you can take to avoid them. Snakes will often feel you before they see you, so if travelling through an area with long grass it’s best to stomp around a bit to notify any snakes in the area that you’re on your way. If you see a snake, stay still or back away slowly. Although there are many snakes in Australia, it is quite rare to see them.

The diversity in Australia will amaze. From the scenery, to the people, to the wildlife population the unique and vibrant country will leave you in jaw-dropping amazement. If you’ve ever wondered what life is like in Australia we can help you research what it’s like there as a British expat or retiree. The Australia Buying Guide is the number one resource for planning a move to Australia, transferring money abroad and buying Australian property.