Property prices in Sydney and Melbourne have risen fast over the past eight years, taking them beyond the reach of both locals and new UK arrivals. Events in America, however, could cause them to head in the opposite direction and make that dream new life even more achievable.

As British people – and those from many other countries – have seen Australia as a new land of opportunity, with a warm and welcoming attitude to life and a booming economy, one factor has put a dent in that dream; the high price of property. That could be about to change, however.

With record-breaking home prices and historically low wage growth, many experts are saying it’s a property bubble in the Australian capital cities of Sydney and Melbourne. Between 2009 and 2017 property prices in Sydney and Melbourne increased by 99% and 85% respectively. Between 2011 and 2016 wage growth grew 13% and in 2017 it has only inched up 0.5%. These conditions are perfect for a property crash if the right external situations transpire. Some believe that President Trump’s domestic fiscal policies will cause the Australian property bubble to burst.

If interest rates increase in Australia and mortgage affordability puts pressure on an already stretched household debt, the property price dam could collapse.

The Australian government has made some half-hearted attempts at cooling the Australian property market, but for the most part, it has been left to its own devices. It is widely believed that Prime Minister Malcolm Turnbull is more interested in keeping current property owners happy instead of implementing reforms allowing younger Australians and first-time home buyers to enter the property market. As household debt compared to household income has spiralled ever higher, it seems that politics in America could be the only way to bring Australian property prices back to a sensible level. As the US sees record-level infrastructure spending, tax cuts and strong employment figures the strong American economy may force up the cost of Australian borrowing.

The Australian and American economies are directly related. The US Federal Reserve has already raised interest rates twice this year and The Australian Reserve Bank will likely follow suit. This could change the home-owning landscape, following an extended period of cheap financing due to low interest rates, that has seen demand for Australian property increase and house prices follow. If interest rates increase in Australia and mortgage affordability puts pressure on an already stretched household debt, the property price dam could collapse. 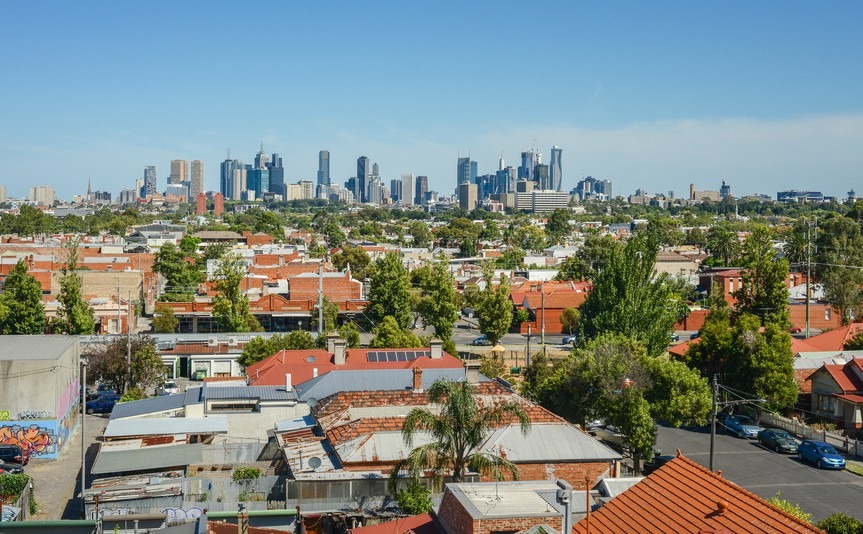 Property prices have increased rapidly in Melbourne in recent years.

If interest rates increase, household debt will force many Australians to sell, which could cause a glut of homes on the market and prices to fall rapidly. Longer term economic factors such as the continued off-shoring of low-skilled manufacturing jobs, technology replacing jobs and an aging population will also contribute to housing deflation.

Feeling charitable? How would you like to pay the odd £10,000 more than necessary for your dazzling new des res in Sydney? You needn’t answer that, but it happens all too often when British people buy abroad without using a currency specialist. Whether buying or renting, speak to a currency specialist to determine how to get the most Australian dollars for your pounds.

Whether or not Australia increases interest rates as a response to Donald Trump and the US Federal Reserve’s fiscal measures, the property price increases that Australian capital cities have experienced in the last decade are not sustainable.

The property price increases that Australian capital cities have experienced in the last decade are not sustainable.

If you’re a budding British expat or retiree looking to move to Australia and buy property (and can’t wait for property prices in Sydney and Melbourne to drop), there are many other parts of Australia that present excellent investment opportunities. Property prices in Perth have seen double digit declines in the last few years, and the Brisbane and Adelaide market are more balanced than larger capitals. There are also many great outer suburbs and towns surrounding Sydney and Melbourne that offer a fantastic lifestyle and a reasonable cost of living.