Until Brexit came along and made every problem seem a bit trivial, one of the biggest issues facing the UK was an overheated London property market. The government responded by forcing some government bodies out to other cities, especially in the north. But many businesses and organisations haven’t needed a shove. Neither have the young people looking to get on the housing ladder. As the London property market has stalled, so the regions are looking relatively attractive for UK property investors too. Here are the new property hotspots outside London.

It isn’t just about property. With a population of 14 million, London is four times the size of any other British city. Although it has a good transport service, by and large, the saga of getting just one new runway built at Heathrow demonstrates that this is a crowded place. In The Economist magazine’s latest “Liveable Cities Index”, London came 48th, while Manchester leapt 16 places to 35th. The rosy glow that the London 2012 Olympics left has dissipated, while the irritations of life in a vast city remain.

So where are the new hotspots and who is moving there? 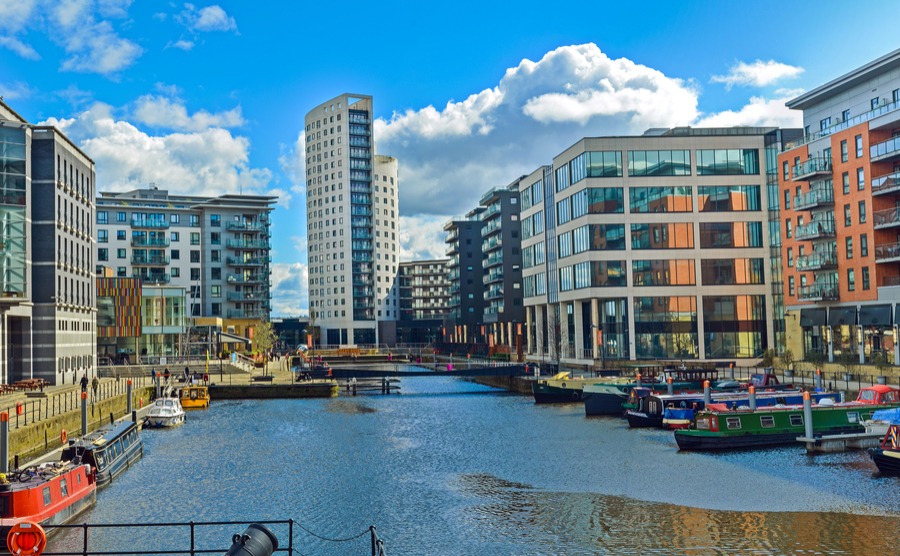 The broadcaster Channel 4 has recently announced that its new base will be in Leeds. The largest city in Yorkshire, with a population of around half a million, will see 200 jobs created by Channel 4. But it is the cool edginess of the Channel 4 brand that Leeds will mainly profit from. Leeds has traditionally lacked the urban cool of northern cities such as Liverpool and Manchester.

Leeds has traditionally lacked the urban cool of northern cities such as Liverpool and Manchester. But it has more money

But it has more money. Its GVA per head (Gross Value Added, a measure of economic productivity) is higher than other northern cities, with jobs particularly in financial services. Big private companies include First Direct and The Yorkshire Bank, but it is also the northern HQ of Barclays, Santander, Lloyds and others.

The government has moved staff to Leeds, including large parts of the Department for Work and Pensions, and HM Revenue and Customs. There are health jobs too, not just in some large teaching hospitals, but also in the Department of Health and the Quality Care Commission.

Culture-wise, it’s ironic that a city known for financial services has a once-great football team that’s spent 15 years in the doldrums due to financial mismanagement. That could be about to change, however, with it looking good for promotion in 2019. Leeds also has Yorkshire Cricket Club and Leeds Rhinos rugby club.

While its football team was sinking, Leeds culture was doing rather well. The Royal Armouries Museum is a new offshoot of the Tower of London’s collection. It’s also the 10th birthday this year of the rather grand Leeds City Museum.

For investors, Leeds is a popular student city, with over 50,000 at the city’s two main universities. There are both HMOs and purpose-built student blocks to invest in including several brand-new high-rise blocks.

Don’t lose your rental profits to suddenly changing exchange rates. Find out how to lock in one rate in the free Property Buyer’s Guide to Currency.

Jump on a train to Harrogate or do the 15-mile drive and you’ll soon see another side to Leeds – the gorgeous Yorkshire Dales which are just on the doorstep. In Harrogate, detached homes average over £550,000 and terraced properties £340,000. 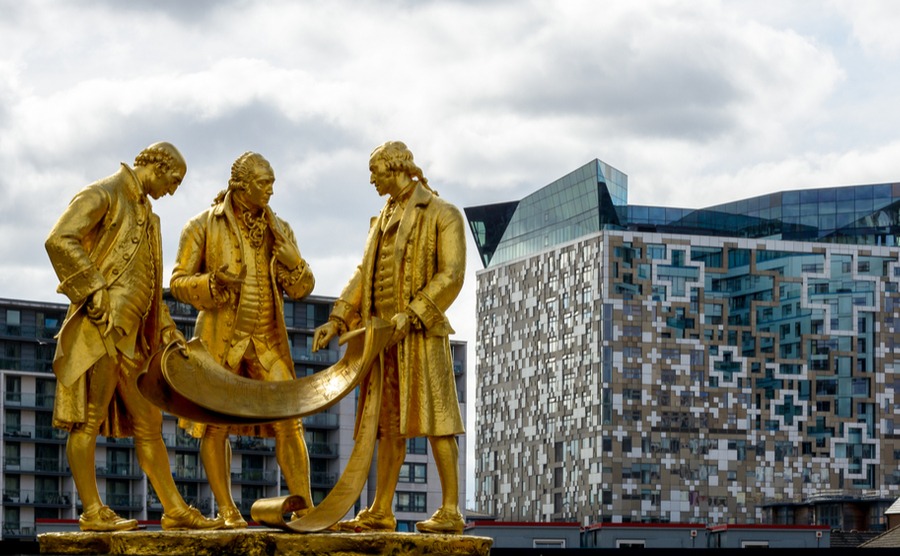 Birmingham missed out on the Channel 4 move, much to the disappointment of its dynamic new Mayor who had heralded the city’s “unrivalled connectivity, the diverse and young nature of our population and the strength of our creative and digital economy”.

Channel 4 may not be coming, nor is the Bank of England despite the rumours a year ago, but plenty of other things are. The most important of these is HS2, the high speed rail link to London. Scheduled to start service in 2026, HS2 trains will cut the journey time to London to 49 minutes from the current 81 minutes. Property close to HS2 stations are bound to be popular.

Several high profile new employers didn’t wait. These include Deutsche Bank and HSBC, each with over 1,000 employees, and the HMRC, scheduled to arrive in Birmingham in 2020 with nearly 4,000 people. One fan of the city is Prime Minister Theresa May, who has praised the city as the “Midlands motor”, maybe seeking to distance herself from her predecessor’s “Northern Powerhouse“.

The city has often been the butt of jokes but that changed when its grand new Bullring shopping centre was opened, to universal acclaim. Even so, it may be even less cool than Leeds, but it came third in a poll of the happiest places to work. So who’s laughing now?

Famously, Birmingham has more canals than Venice, and property along the canals tends to be popular, especially in Brindleyplace and the Jewellery Quarter. These have become some of the trendiest areas to live, with good nightlife and shopping and plenty of history too.

For family life, the suburb of Bournville is particularly popular, as are Halesowen and Harbourne.

For step-by-step information on buying property in the UK, including best areas, download your copy of the UK Buying Guide. 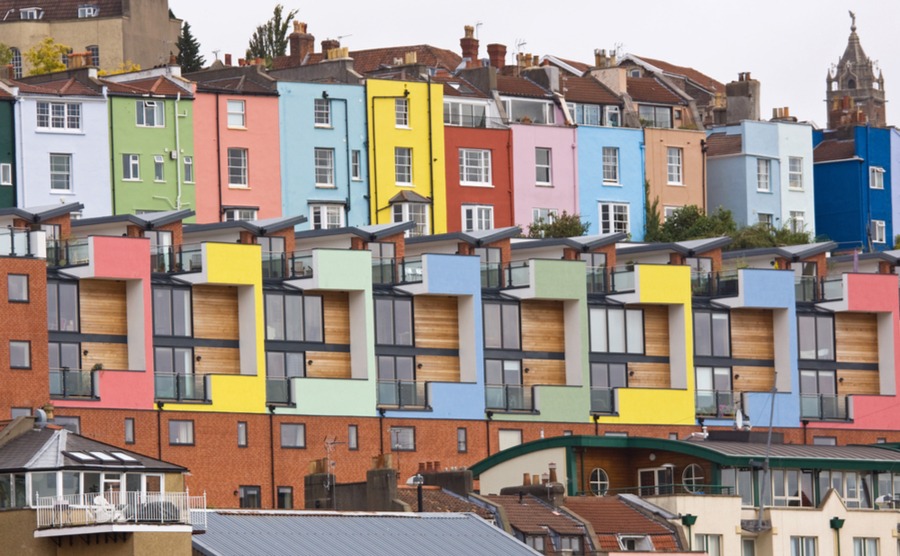 Eleven people are arriving in Bristol from London each day and not going back. Some have been attracted by the high-tech jobs in “silicon gorge“, others by the general ambience of a city described by National Geographic Traveller as “the coolest city in Europe”. The city is surrounded by glorious countryside, including the Cotswolds, the Mendip Hills and the Wye Valley just across the Bristol Channel. Yet it’s a port city too, with a beautifully recreated harbour.

The creative industries also do well in Bristol. The city claims 14 BAFTAS and four Oscars. Banksy and Aardman animation are both among its famous offspring.

Bristol is a favourite for energetic youngsters with good jobs who have, nevertheless, been priced out of the London property market. Major engineering employers in the area include Airbus, Rolls Royce, GKN Aerospace and Network Rail. In financial services, AXA and Lloyds each emply over 2,500 people. The creative industries also do well in Bristol. The city claims 14 BAFTAS and four Oscars. Banksy and Aardman animation are both among its famous offspring.

The 120-mile journey from London takes around two hours 20 minutes by car and 90 minutes by train.

The biggest selling property type on Rightmove last year were terraced. Average prices for these were just under £300,000. Semi-detached homes were £330,000 and flats £243,000. More expensive suburbs include Montpelier at around 10% above the Bristol average, and Kingsdown at 50% above.