Where are the best places to live in the UK?

“The past is another country” as an English writer once said. Maybe you’ve been away for a while, perhaps living abroad. Perhaps you’ve popped back to see relatives but haven’t travelled around the UK for decades.

In that time some British towns have become more fashionable, especially with older industries disappearing and new tech hubs opening. Some areas have become more popular with students – great for the nightlife, but not so good for a stable sense of community. Others have far better transport infrastructure than before (and some have worse!).

Last week The Sunday Times released its annual Best Places to Live survey. The winners were:

The newspaper also highlighted new trends in desirability. “Nature really is the new culture”, they said. “It’s all about ditching the car and inhaling fresh air. The best locations all offer parkruns, yoga in the village hall and proximity to wide-open spaces and/or the wild sea.” Dogs are in, sociability is in, with being able to make friends easily a priority, and local businesses are in, such as craft breweries. Less important, they claim, are having a Waitrose on the doorstep, as other supermarkets are so improved. 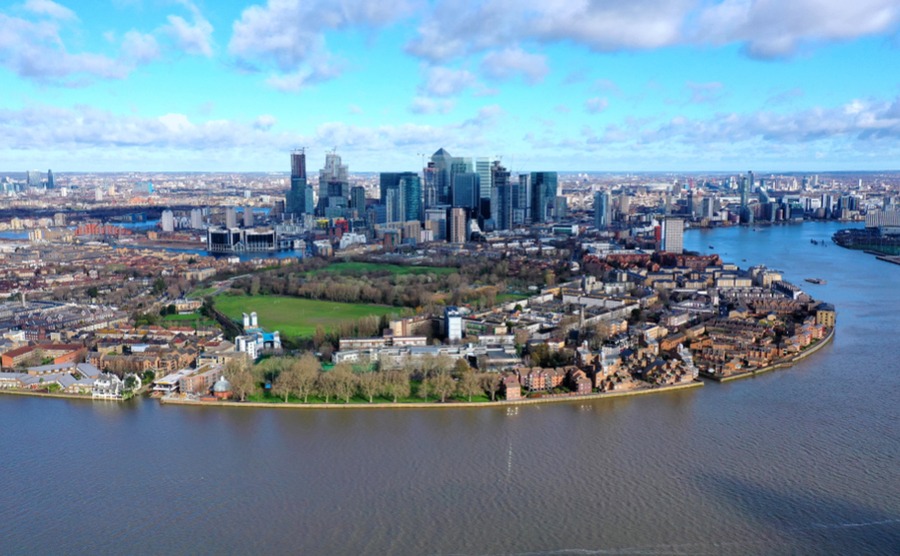 The Isle of Dogs. Best place to live in London?

Britain, it turns out, much to many people’s surprise, is a very happy place to live. Getting into the detail, Rightmove’s slogan is “Find your happy”, and they commission a survey each year to find the happiest places in their happy at home index. This “surveyed more than 21,000 people across 219 areas on factors such as feeling safe, community spirit, proximity to green spaces, friendliness and amenities.” The currency winners are:

When it came to the happiest areas, the south generally did better. Scotland’s highest entry was Edinburgh being highest at 41. However, where Scotland did score highly was for community spirit. London’s highest entry was Richmond-on-Thames, which frankly is stretching London about as far as it can go anyway! Trendy boroughs closer to the city fared less well, such as Camden (58), Hackney (146) and Islington (149).

Research from Savills has located the places in Britain with the most listed buildings per head of population. Listed buildings are those properties and structures that are judged to be the country’s most significant or beautiful. These are:

The top three, each with at least 17 listed buildings per 100 people, are all either in the Cotswolds or on its borders. However, not every town with large numbers of listed buildings are expensive. The north-eastern town of Whitehaven, for example, has over 170 listed buildings, yet average prices overall were just £141,000.

Okay, so the people are happy, but are they also smug and a bit cliquey? And the homes are historic and beautiful, but will you ever be invited round? Another survey, this one from the Provident, tested those old-fashioned virtues of politeness, friendliness and the welcome you can expect.