Working from home in Portugal: An attractive prospect for holiday home owners

A recent Portugal Property Guides survey has shown that working from home in Portugal is part of the plan for almost 30% of people intending to buy a holiday home there. A further 21% said that they may do some work from their Portuguese bolthole.

The survey also produced some interesting data around how much time aspiring holiday home owners plan to spend in Portugal each year. As many as 31% anticipate being there for between 90 and 180 days, and 27% estimate between 60 and 89 days.

Given that this is way beyond even the most generous annual holiday allowance, it’s little wonder that the prospect of working from home in Portugal is part of the equation for many.

Despite millions of people proving that they could do their jobs perfectly well from home during the pandemic, home working has been subject to a recent backlash in some countries.

In the UK, this has come right from the top, with Prime Minster Boris Johnson controversially claiming that people are “more productive, more energetic, more full of ideas” when office based. Unsurprisingly, many people passionately disagree, and question the true motives behind the PM’s stated opinion. 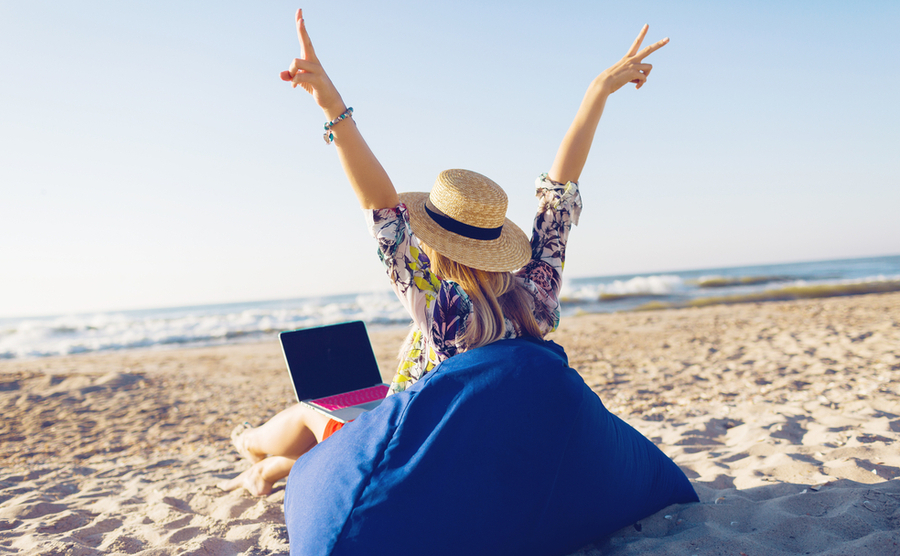 Portugal has emerged as a choice destination for tech firms, start-ups and digital nomads.

Portugal’s growing status as a hub for digital nomads

In recent years, Portugal has emerged as a choice destination for tech firms, start-ups and digital nomads. This trend began (and is now fully embedded) in Lisbon, with Porto and the island of Madeira hot on the capital’s heels.

A recent Times article discussed Lisbon’s rising status as a hub for business talent, suggesting that it could be “bad news for Britain.” Portugal’s government has launched a series of initiatives to attract people to the country – from the non-habitual resident taxation scheme to Golden Visas for high-net-worth individuals.

By comparison, Britain’s current attitude to immigration and its approach to home working seems distinctly stuck in the past. Both Google and Facebook have offices in Lisbon, as do Deloitte, PWC and Microsoft. Skilled workers have a choice of where to live, and no longer have to head to London by default.

In this post-Brexit world, the most significant thing to understand is that Brits without a visa are only allowed to spend 90 out of each 180 days in Schengen countries, including Portugal. Furthermore, this entails being in Portugal as a visitor, in practical terms – not as a worker.

When it comes to working from home in Portugal while “on holiday” there, it’s wise to seek professional advice. There’s nothing to suggest that anybody polices whether people are replying to work emails or completing other business activities from their holiday homes. However, the waiver scheme that permits Brits to spend 90 out of 180 days in Portugal is NOT equivalent to a working visa. There are some allowed exceptions, but they’re not exhaustive.

It’s also essential, when spending prolonged periods anywhere in Europe, to ensure passports are stamped on entry and exit, to ensure the 90 days can be efficiently tracked.

Thankfully, Portugal’s open approach to digital nomads and entrepreneurs means that there are always options. These are particularly relevant to the survey respondents planning to spend over 90 days in the country each year.

For example, there’s the D7 visa and residence permit, aimed at retirees and the self-employed. With minimal income requirements, equivalent to Portuguese minimum wage, this visa allows for extended stays, and the ability to work. Applicants may even be able to make use of the non-habitual residence tax scheme to pay less tax than they would “back home.”

Obviously it’s crucial that people seek accountancy advice from somebody with expertise in both Portuguese tax law, and that of their home country. However, most people will find themselves with options. Portugal is very much open for business.

More and more people are moving to Portugal to peruse their careers. If the alternative is being forced to needlessly commute on packed trains and motorways, it’s little wonder working from a sunny terrace holds more appeal. Perhaps that holiday home can become a full-time home.

Download our Emigration Guide, with all the information you need in one place about moving overseas.