Things might be quite quiet down here in the Algarve, but the defeat of Theresa May’s Withdrawal Agreement hasn’t escaped notice. The Foreign Ministry has announced generous plans for Brexit in Portugal to preserve expat rights and encourage tourism as an ‘old British ally’. Plus, as we tally up from 2018, last year looks good for us, with a record year for exports and investment.

Theresa May’s withdrawal agreement was rejected in the House of Commons on the 15th, and no-one’s quite sure what the future holds at the moment. However, with Britain and Portugal having the oldest alliance still in vigour – and the UK an important source of revenue for us – Foreign Minister Augusto Santos Silva has announced important plans to smooth the transition of any potential no-deal Brexit in Portugal.

Portugal will not request visas and will open special channels for British tourists in Faro and Funchal to speed up check-in. Furthermore, there is a plan for a boost in resources at ports, airports and other customs points. Businesses in Portugal doing commerce with the UK will receive an extra line of credit over over €50 million in total.

The Foreign Ministry has announced its plan to counter the impact of Brexit in Portugal. Dolores Giraldez Alonso / Shutterstock.com

We’ve also been speaking to legal specialists about how anyone buying property in a no-deal will be affected, and the consensus is that your rights will be the same, but you’ll need to do a bit of visa paperwork. Our Resource Centre can introduce you to visa specialists who can help you plan – simply give them a ring on +44(0)20 7898 0549 or email [email protected].

2018 was the best year for Portuguese external investment since AICEP, our international trade agency, was first set up in 2002. Some €1.2 billion of investment came into the country last year, with huge direct investment. This includes foreign property buyers, many of whom could qualify for a so-called ‘golden visa‘ after buying a property worth over €350,000. In fact, a massive 94% of investor turnover in Portugal came from overseas – and it looks set to continue.

If you’re thinking of buying in Portugal within the next year, make sure to get your free tickets to Your Overseas Home while they last. It’s a fantastic chance to make connections with experts in all areas of moving, from estate agents to currency brokers, lawyers, removals experts and more.

A lot of money is also being channelled into local projects. Monchique suffered devastating forest fires last year, but over €500,000 is now reallocated to boost nature tourism in this beautiful region. It’s certainly somewhere worth visiting – the mountain of Fóia has fantastic views right out over the Atlantic. 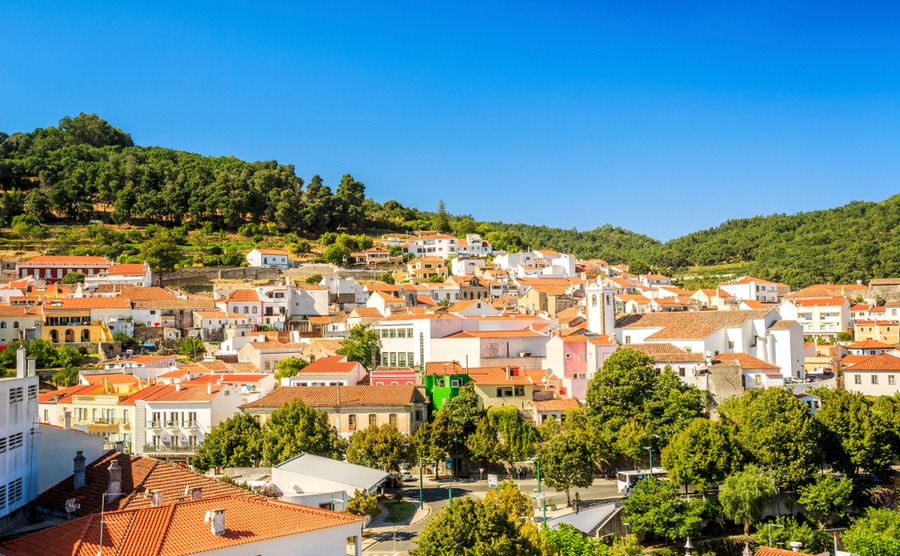 Monchique is getting special investment to help promote a return of natural tourism.

The closed deal on Montijo Airport is great news for anyone flying into Portugal, as it expands the capital’s air traffic capacity to 50 million. The airport, once a military base, will be used as a secondary capacity-increaser for the overflow from the main airport. The airports authority, ANA, is set to invest over €1.15 billion into the project by the end of 2028, including building a swish ‘new-generation’ terminal.

If you’re thinking of buying out here, speak to the Property Guides Resource Team to plan your next move. Call us on 020 7898 0549 or email [email protected]

For property, this is interesting times indeed! Word on the ground among my contact is that Seixal is going to be the next big area, precisely because of the level of investment. It’s on the south of Lisbon Bay, halfway between the city and airport and has excellent transit routes. One to keep an eye on…

The central region sometimes doesn’t get as much love as the north or the south, but it is a beautiful area, full of fantastic whitewashed villages and towns. Now, a social enterprise, Portugal Social Innovation, has opened a tendering process to “…propose innovative solutions to mitigate social problems in the areas of health, education, justice, social protection, inclusion and employment.” It has two aims: to stimulate development and boost social investment.