Being a father in Portugal: legalities and realities

Portugal has the most generous paternity benefits in Europe, and that shows in the way fathers bond with their kids. It’s all a recipe for happy families, says Ben, our writer in Portugal, who recently became a father there!

Portugal is an extremely family focused country. If you’re in any doubt about this, visit a shopping centre there on a busy Sunday afternoon. You’ll see groups where four generations of family are shopping and relaxing together. It’s a heart-warming sight, and reflective of an attitude that makes Portugal a delightful place to raise children.

Fathers can live a less pressured working life that doesn’t involve the kind of commuting so common in Britain.

As in many places, there was probably a time in Portugal when mothers and fathers had very distinct and different roles in raising children. However, that’s very much not the case now. Modern fathers in Portugal get involved and get their hands dirty (sometimes literally!)

This is, of course, a generalisation, but subjectively speaking, dads in Portugal are often more hands on than in the UK. This is because many can live a less pressured working life that doesn’t involve the kind of commuting so common in Britain. 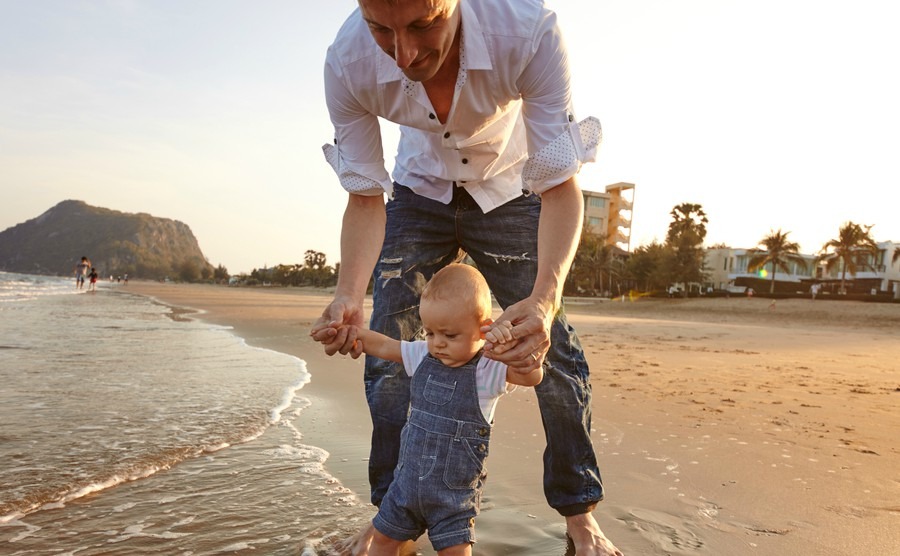 Bonding with baby at the beach

Portugal’s attitude towards the importance of fatherhood is reflected in the fact that the 13 weeks of paid leave available after the birth of a child take the form of parental leave. This is leave that can be taken by the father or the mother.

Ready to see some Portuguese property? Check out our recommended listings, from trusted estate agents.

There are also four weeks of fully paid paternity leave for new fathers, of which two weeks are mandatory. Although EU nations are gradually becoming more progressive in this regard, Portugal is still way ahead of many, with some only offering one or two paid days!

This is all great news for new dads, who have guaranteed time to bond with their children. Coupled with the option of sharing the initial parenting duties with the mother by taking additional time off, new families (who are covered by Portugal’s social security system) have a reasonable level of flexibility in juggling the new demands on their time.

Dads in Portugal have guaranteed time to bond with their children.

Strong relationships between fathers and their children are clearly visible across Portugal. You’re as likely to see dads at the nursery gate as mums, as well as entire families eating in restaurants, which are always welcoming to children in Portugal.

So, all in all, Portugal is a pretty great place to be a dad. While there are obviously some families that conform to more “traditional” mother/father roles, modern parenting is alive and well. Midwives tend to proactively ensure it’s not just the mother who’s shown how to change the first nappy in the hospital. “Hands on” is definitely the theme – and it’s a theme that’s endearingly reflected in the strength of relationships you so often see between fathers and their children in Portugal.