Could you move to Aljezur? The Algarve’s unspoilt town

Many people considering a move to Portugal seek authenticity and a genuine Portuguese lifestyle. This can mean thinking outside the box and avoiding the more well-known areas. In this article, we discuss moving to Aljezur – a place that certainly puts a tick in the “authentic” column.

Over time, more and more of Portugal’s Algarve has been “discovered” by overseas residents. Decades ago, expats flocked to central areas. More recently, the area east of Faro has grown in popularity. Aljezur is on Portugal’s wilder and much less developed west coast.

Is west about to become “the new east?” Well, that’s unlikely, because the geography and infrastructure is very different. But there are some compelling reasons why the west Algarve coast is currently grabbing attention – as you’ll find out in a moment.

Just before we begin, it’s worthwhile to clarify a definition. There can be some confusion over the “west Algarve.” It’s often a term used to describe the western part of the southern coast, including towns like Portimão and Lagos. The west coast is further west, and covers the west-facing coast heading north towards the Alentejo and Lisbon. The two “west Algarves” are very different!

Getting there and away

Aljezur is a little further away from Faro airport than most Algarve destinations. However, it’s still only a 75-minute drive from the airport, via the fast A22 toll road.

Being realistic, this is a place where a car is practically essential. The nearest train station is in Lagos, some 30-40 minutes away by road. There is a bus route the passes through the town on a journey between Lagos and Lisbon. Aljezur to Lisbon takes just under three hours by car.

Aljezur is an attractive market town with a population of around 6000 people. It’s dissected by a river, and overlooked by an imposing castle on a hill.

As for look and feel, this is textbook southern Portugal: Whitewashed Moorish houses, and an idyllic location between the sea and the mountains. But you’re far more likely to hear Portuguese than English. Aljezur isn’t really on the core tourist trail – it’s more the kind of place people pass through on day trips, especially surfers visiting the wild and windy local beaches.

In terms of practicalities, there’s a daily municipal market, and a much larger monthly affair. There are plenty of low-key restaurants, bars and cafés. For those seeking history and culture, there are several museums, galleries and churches.

If you’re looking for a party lifestyle, this is not the place! However, Aljezur delivers all the other key components of the Portuguese idyll – not least a wide selection of beaches. 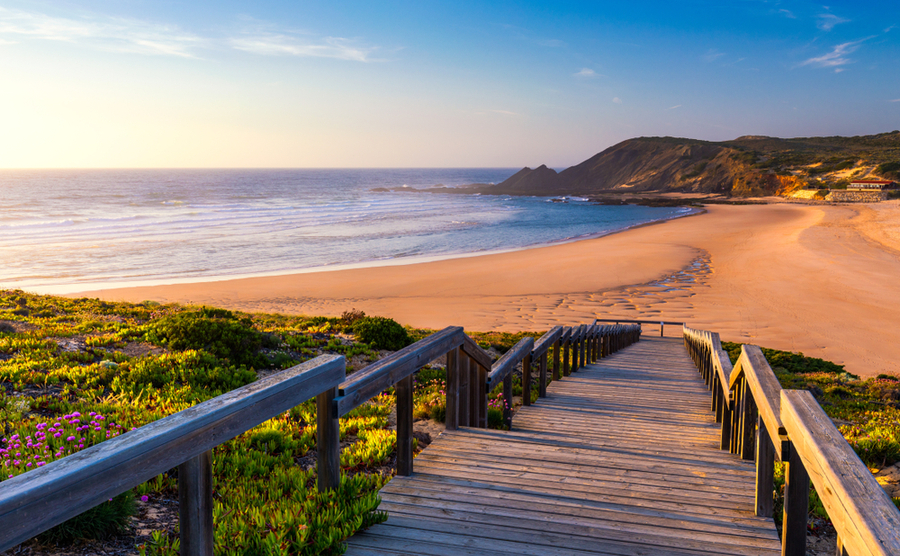 Aljezur delivers all the other key components of the Portuguese idyll – not least a wide selection of beaches.

Aljezur sits within the Southwest Alentejo and St Vincent Coast Nature Park. In fact, although the town is part of the Algarve, it’s not far from the Alentejo region itself. This does lend the area more of a laid-back Alentejo feel, which can seem a world away from life on the frenetic southern coast – especially in the summer.

Coastwise, this is very much the “wild west” – crashing waves, surfers, and huge expanses of sand that you can often have to yourself. Some of the ocean vistas here are – arguably – the finest in Portugal. Don’t be surprised to see photographers creatively capturing them.

The spa town of Monchique is roughly parallel to Aljezur, and about 40 minutes away by car. Lagos is only a short drive away, and forms the gateway to the motorway, the train line, and the more developed Algarve.

This is the Algarve’s west coast, so it’s best to assume it will be windy. That said, much decides on exactly where you’re located. It’s certainly worth thinking about wind if you’re choosing a property, in case you want to ensure you have a sheltered, suntrap garden.

Having said that, this is still the Algarve. In the peak of the summer, you’ll be grateful for that wind, because it takes the edge off temperatures that are often in the high 30s. The summer is long, autumn feels like a second spring, and the winter is generally mild.

Despite Aljezur’s relatively tucked away location, you will still find a small community of international residents.

Despite Aljezur’s relatively tucked away location, you will still find a small community of international residents. If you are moving with family, there’s an international school in the town, which has been in operation since 2010. This also serves students from other Algarve towns, such as Alvor and Lagos.

The school is potentially a big plus for overseas residents. Another is the fact that Aljezur is one of five council areas in the Algarve that remains fully eligible for Portugal’s Golden Visa scheme from 2022 onwards.

Something to keep in mind if you’re of employment age is that Aljezur is a predominantly Portuguese speaking place. It’s also relatively rural. This isn’t a great place for job hunting – even if you are fluent in the language.

There is the option of seeking work in Lagos or the wider Algarve, but you would need to commute. As such, Aljezur is great for retirees, freelancers and remote workers, but needs more careful consideration for those who need to find a traditional job.

Aljezur’s location away from the tourist trail means you can enjoy lower prices and get more for your money.

This isn’t much of an apartment town, but small houses start from around €150,000 anyway. A budget of €250,000 will get you a townhouse or small villa in great order. €400,000 will get you the kind of secluded villa with private pool that could easily cost you double further south.

If you’ve ever wondered about building your own home from scratch, it’s worth noting that there’s also a large selection of good building plots, with many coming in comfortably below €100,000. There’s certainly no shortage of options in this area.

With its international school, Golden Visa status and welcoming atmosphere, Aljezur seems set to grow in popularity. Perhaps it’s time to stake your claim to a part of it.