Portugal is a country that takes New Year very seriously, almost to the point that many people seem to celebrate it as much (if not more) than Christmas. It’s a great opportunity to see Portugal truly let its hair down, so if you’re a bit of a party animal you’re coming to the right place. If you’re someone who doesn’t really go in for New Year celebrations, there’s still plenty to enjoy in a more low-key way, even if that simply means preparing some nice food and watching the fireworks from your garden or balcony.

Portugal is a country that takes New Year very seriously.

Regardless of your stance on New Year, here are some things you should know about how it’s celebrated in Portugal.

There are plenty of foods that appear in Portugal over Christmas and New Year that aren’t so widely available the rest of the year. One of the key things to look out for is shellfish, where the usual selections are supplemented with things like king crab legs and giant prawns. You’ll also find no end of speciality cakes and pastries, luxurious cuts of meat and bottles of local sparkling wine that are a match for Italian prosecco. Even if you’d rather opt out of any organised celebrations, it’s well worth taking the chance to stock up on some of these tasty treats. 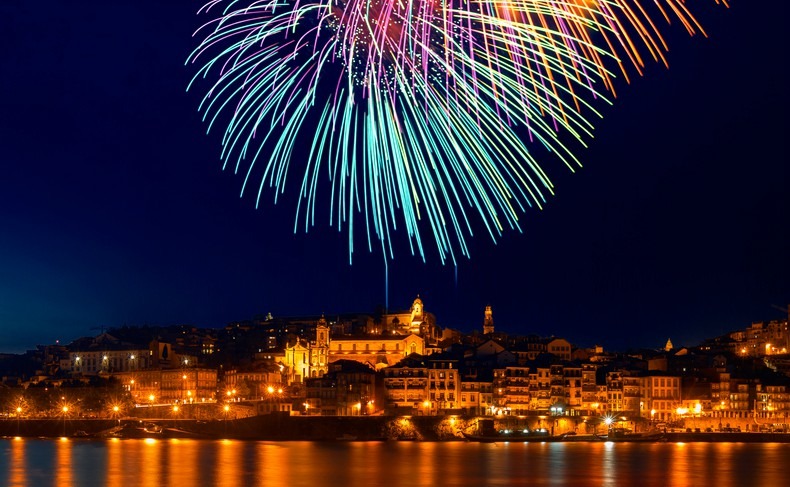 Most towns and cities in Portugal have impressive fireworks displays on New Year’s Eve, particularly in major cities like Porto and Lisbon. In the Algarve, Albufeira is the focal point for New Year, with a huge firework display and usually a globally-recognised band or artist playing.

On the subject of music, there’s a lot of it in Portugal over New Year, and it’s not confined to just one night. Many towns have a programme of entertainment, including bands and DJs, that lasts for several days. Typically, these events go on well into the early hours, and can be heard for miles around.

We have thousands of homes for sale in Portugal on our property listings. Click here to have a browse

In coastal towns there’s often a sponsored swim you can get involved in on New Year’s Day. In Albufeira, for example, many people head for a dip in the sea as soon as the clock strikes midnight – you probably wouldn’t do that in the English Channel.