The sun is shining on the luxury property market in the Costa del Sol, from spacious villas by some of Europe’s best golf resorts, through to investment apartments with strong yields. The region’s whitewashed villages, golden beaches, top-class yachting marinas and sunny microclimate have drawn discerning property buyers for decades. So, where are the best areas to purchase a home?

Once upon a time, the Costa del Sol was made up of little fishing villages but the region began to change between 1959 and 1974 when tourism made its way there. The area around Marbella began to see uppercrust tourism as far back as 1943 when Ricardo Soriano, Marquis of Ivanrey, moved to Marbella and brought with him his rich and famous friends. Later on, he built a resort called Venta y Albergues El Rodeo. A decade later, Torremolinos welcomed the famous from Hollywood, including Grace Kelly, Bridget Bardot, Frank Sinatra and Marlon Brando.

The Costa del Sol, as it was known, became a brand especially to sell and market this stretch of Spanish coastline to foreign holidaymakers. By the 1980s and 1990s, people from northern Europe were buying property and it became the extremely popular stretch of Spanish coast that it still is today. It is though, an area of contrasts, with high rise apartment blocks rising out of the sandy soil in places such as Benalmádena and swish urbanisations with luxury villas in Mijas Costa, Benahavís and Marbella itself.

Stretching for some 150km from Torremolinos to San Luis de Sabanillas in the south and with around 3,000 hours of sunshine a year it is still one of Europe’s most sought after areas for people looking for luxury homes.

There are international and English schools in Benalmádena, Marbella, Málaga and Mijas Costa.

The continuing appeal of the Costa del Sol

Whitewashed villages nestling in the hills above the sea, long sandy beaches with palm trees swaying in the breeze, jasmine and bougainvillea draping walls, little cobbled streets in the old towns – plus all that sunshine – lure people from all over the world. This is particularly true of high-end property buyers who are seeking a certain lifestyle, good communications, golf courses, high-class restaurants and a proven infrastructure that works. As well as all of that, Spain has just been officially announced as the healthiest country in the world. 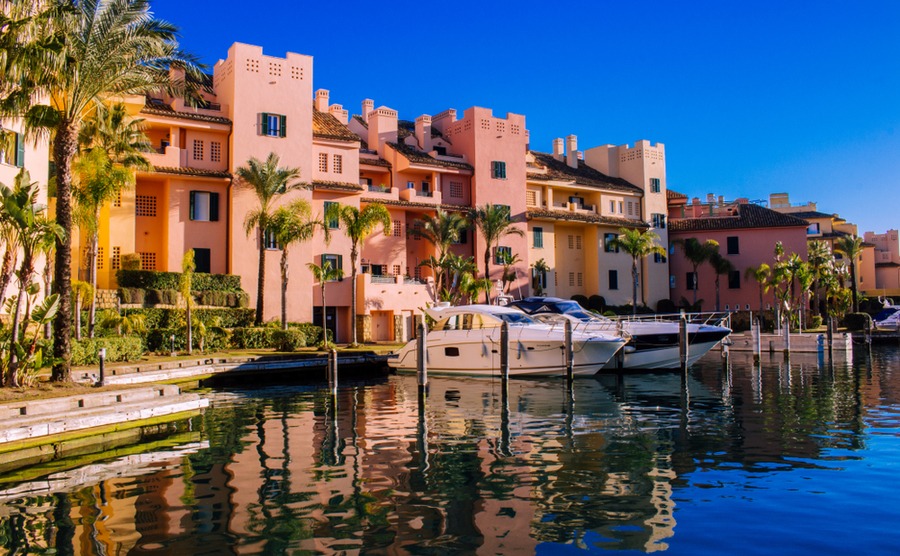 The lifestyle the Costa del Sol offers, from excellent golf resorts to top-notch yachting facilities, makes it a magnet for discerning buyers and investors from around the globe.

The Spanish property market has recovered from the worst effects of the financial crisis and property prices are on the rise. Now is an excellent time to invest in an upmarket property in an area which is forever popular. Brexit has had no visible repercussions as far as the luxury property market is concerned and it is likely to remain buoyant for the rest of this year. According INE, the Spanish Institute of Statistics, 2018 saw prices in Andalusia rise by 5.3% for new builds and 7.7% for resale properties.

Who is making the Costa del Sol home?

The numerous marinas are always busy with large yachts sailing in, whilst private planes and helicopters bring in the well heeled for the many festivals held on the Costa del Sol all year round. The Starlight Festival in Marbella sees famous singers and musicians from around the world. Andrea Bocelli, James Blunt, Il Divo and Sting have all sung there. So to has has Pablo Alborán from Málaga who made his first appearance in London on 4th February 2019 at the Albert Hall.

Many celebrities have homes in the region, TV Chef Antony Worrall Thompson has splendid finca in Mijas, Cilla Black’s Spanish home was in Estepona, footballer Glenn Hoddle bought property in Sotogrande and Marbella’s own Antonio Banderas has a home in Los Monteros. One of the most exclusive addresses in Spain, La Zagleta in Málaga, is home to Hugh Grant, Vladimir Putin and Rod Stewart.

With its fabulous climate, the Costa del Sol is popular year-round, helped by Málaga International Airport which is introducing new routes all the time. The motorway from the airport runs right along the coast, allowing a fast and seamless transfer to all towns and villages.

There are 52 golf courses on the Costa del Sol and these, of course, attract those who want only the best. It isn’t cheap to play golf here but some of the world’s best courses are there to be enjoyed and prices do vary. The Real Club of Sotogrande is one of the most famous, as is Valederama.

Buying a property on the Costa del Sol

This strip of Spain has every conceivable type of property, from multi-million villas. Generally, homes with uninterrupted sea views and close to the beach will fetch the highest prices but there are also some luxurious gated communities a little inland where you will have to pay several million Euro. 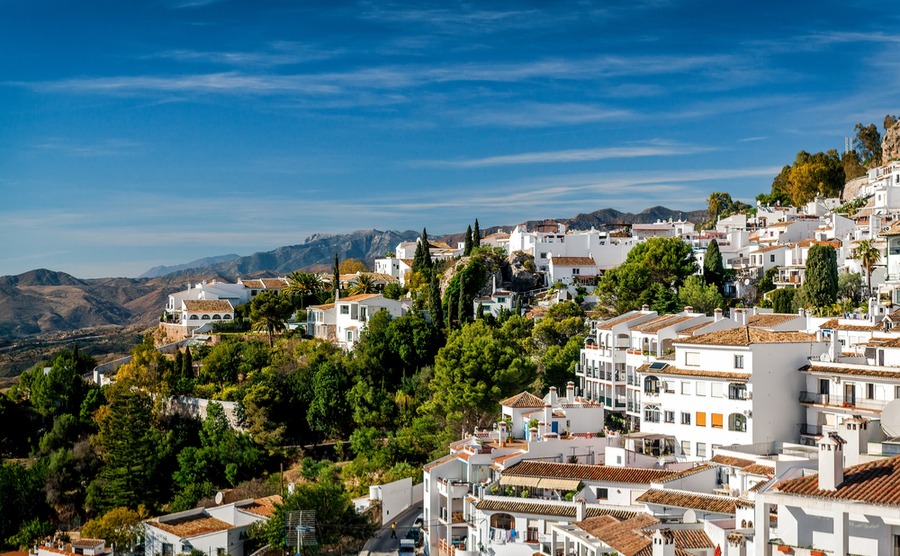 Mijas Costa’s authentic pueblos blancos are heavily in demand among those looking for a home on the Costa del Sol.

This popular spot has luxury homes from €500,000 upwards in some unique urbanisations in the holiday resorts of Calahonda, Riviera del Sol and La Cala de Mijas. One of the main attractions is the plethora of golf courses in and around each resort. Add to that first-class restaurants, sandy beaches and the blue skies, it is a very comfortable place to live. 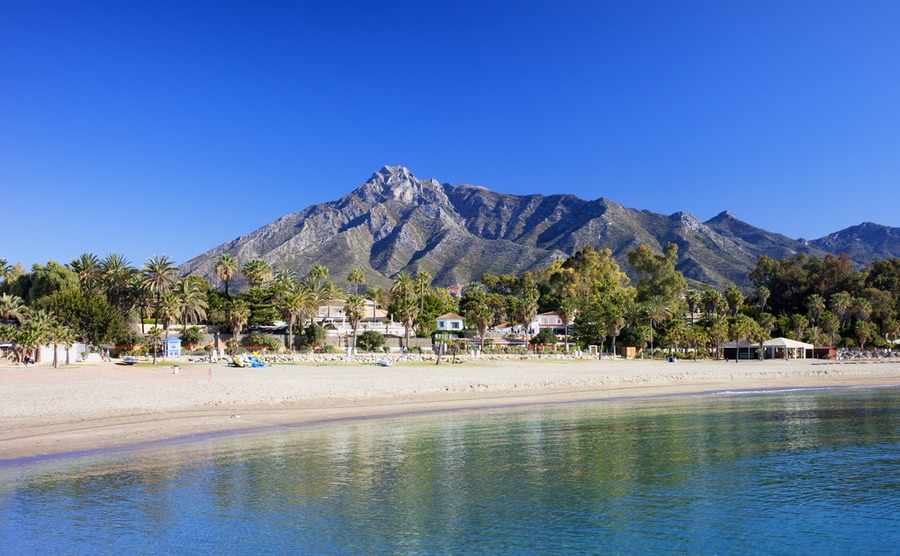 Famous for its “Golden Mile”, Marbella continues to be one of the most sought after locations for luxury property. The population is concentrated in two main centres: Marbella and San Pedro Alcántara. Marbella Old Town houses the famous square, Plaza de los Naranjos, where people relax in the shade of the orange trees. Between the old town and the sea lies a small botanic garden with fountains playing and several statues by Salvador Dalí. 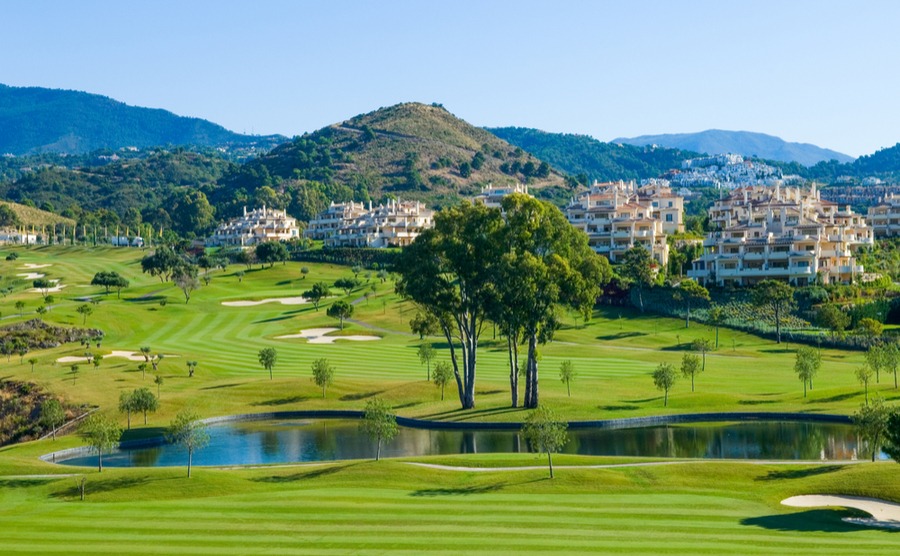 Comparatively unspoilt, the inland village of Benahavís is renowned for its cuisine and welcomes people from around the globe who come to one of its many restaurants. Its winding cobbled streets are unsuitable for cars and are extremely picturesque. Property here is at a premium and there are some wonderful homes to tempt the buyer. 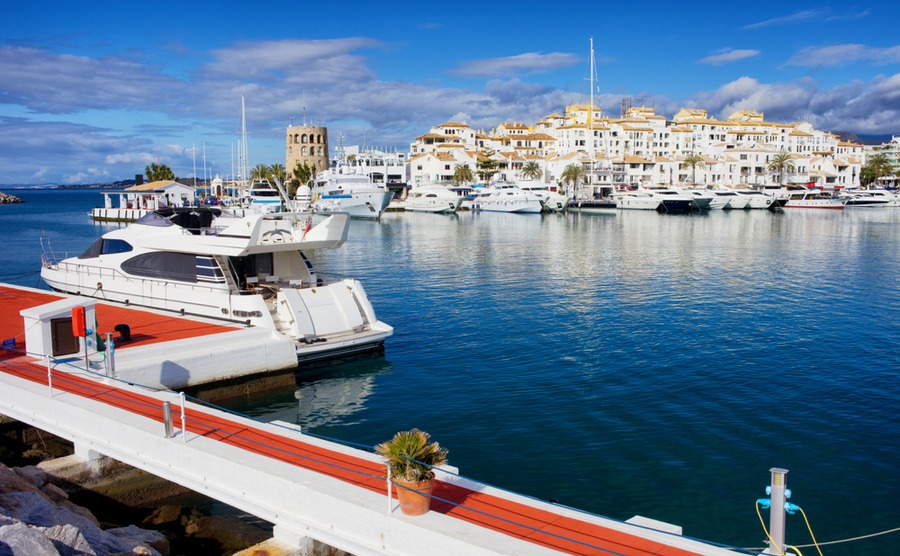 Built in 1970 as a marina and shopping centre it is based around a typical Mediterranean village. expensive shops and restaurants border the extensive marina where yachts of every size bob up and down in the water. Expensive cars are parked nearby, owned perhaps by the many celebrities who come here. Just 60km from Málaga Airport, Puerto Banús with its 915 berths, continues to be “the” place for many, including the King of Saudi Arabia. 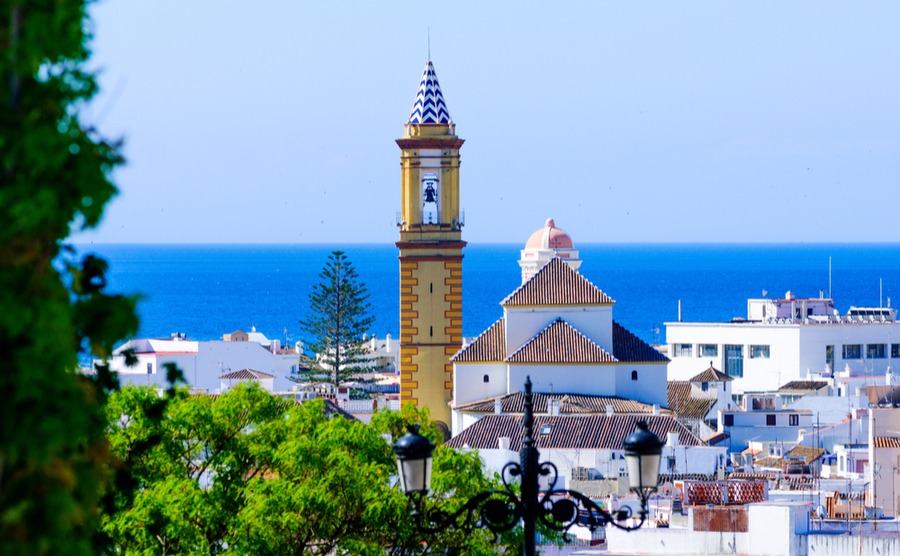 Estepona’s right by the sea and offers a buzzing nightlife and beautiful properties.

Often passed by in favour of Marbella, Estepona is still an authentic pueblo blanco where the oldest district in the old town is truly beautiful, with red geraniums hanging in deep blue pots attached to the walls of the houses. Unsurprisingly, the main square is the plaza de la Flores, the square of flowers. The beaches of Estepona are quieter than those in the nearby towns and Playa Rada has plenty of bars and chiringuitos as well as being comparatively uncrowded. 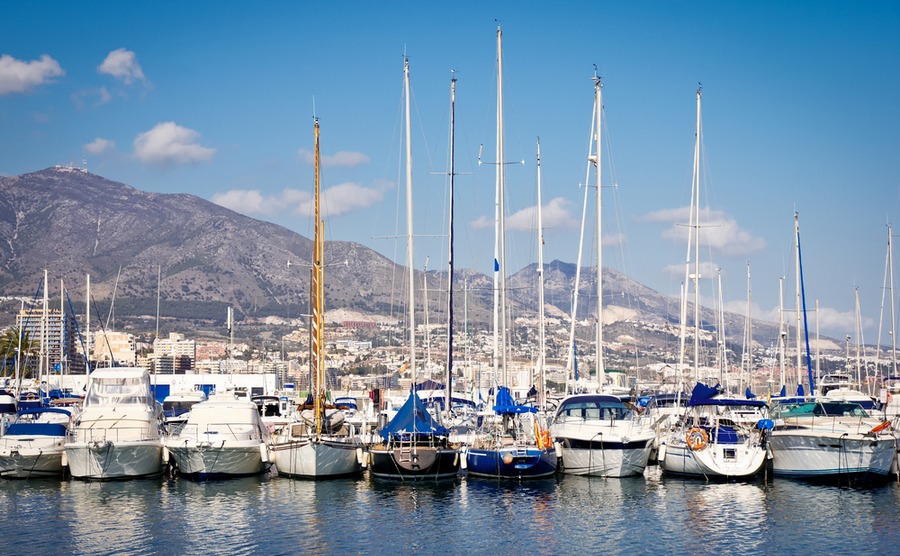 One of the advantages of Fuengirola is the train service to Málaga which runs every half an hour and its distance of just 25 kms to Málaga Airport. Originally it was a little fishing village but today is a very cosmopolitan town on the more expensive side of this Costa with gourmet tapas bars and smart boutiques as well as numerous cultural events and an excellent weekly market. As with the other towns mentioned, there are golf courses nearby and watersports of every type available.