Buying a home on the French Riviera

Cannes, Saint Tropez, Antibes, St Jean-Cap-Ferrat… names to evoke images of perfect blue skies and perfect beach bodies, sophistication, beauty and the ultimate in fine living. But where should you be looking to buy a property on the French Riviera?

The French Riviera stretches from the Italian border in the east to Toulon in the west. The British upper crust have loved it since Queen Victoria and her court descended in the 1880s. “Oh, if only I were at Nice, I should recover,” said the Queen on her deathbed. Whether it was the weather, with 300 days of sunshine per year, the sea, the nearby mountains, the art, the food or the wine that she loved, all these are still available, unspoilt, today.

The eternal appeal of the French Riviera

Palm trees, bougainvillea and long sandy beaches, the world’s best haute cuisine served with a view of the Mediterranean, the allure of the French Riviera is obvious. But there are practical advantages too, including excellent international schools and easy access by air or train, not only to the UK but all the great cities of Europe from Barcelona to Paris, Milan, Florence, Geneva and Lyon. 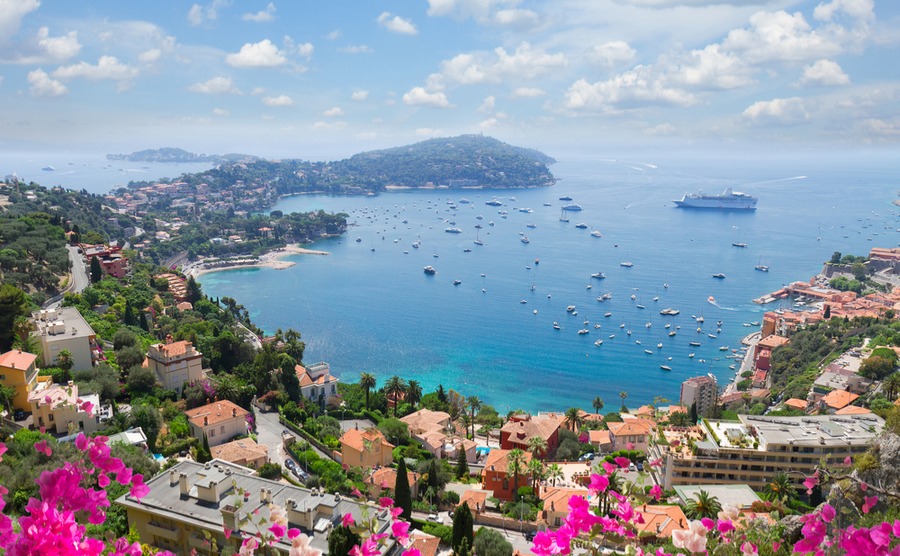 No surprise it’s home to an exciting, lively, multinational community who have chosen to settle permanently here.

French property looks good for investment now, with President Macron’s reforms potentially boosting the economy and property market. There’s an air of optimism too, after another football World Cup win and the 2024 Olympics on the way. It’s still generally viewed as a buyer’s market, but that may not last, with 953,000 property sales (a record) last year.

According to the Society of French Notaires, prices for older (i.e. not new-build) houses are rising nationally by around 3% per year, but with big regional differences. In Toulon, for example, they rose by nearly double that, 5.9%, last year. In Nice, apartment prices were rising by over 4% last year, according to the notaires.

And property is expensive. According to the Property Guides’ Cost of Sunshine Index [LINK: https://www.propertyguides.com/news/article/holiday-home-hotspots-lowest-cost-sunshine/] which compared holiday home prices to the number of hours of sunshine you can expect to enjoy there, the French Riviera has the most expensive sunshine in the Mediterranean. Although it’s still far cheaper than Eastbourne!

Who calls it home?

The French Riviera’s permanent sunshine and extensive social calendar ensures a steady flow of private jets descending into town all year round. The who’s who of Hollywood congregate for the Cannes Film Festival, international musicians like Beyoncé and Jay Z regularly perform in the region or come here to record new material.

The region’s natural beauty, central location and relative peace and quiet means many a second (or third, or fourth) home is bought here. Elton John and David Furnish have their summer house at the top of Mount Boron, overlooking Nice and Villefranche-sur-Mer. Bono and The Edge both own beachfront villas in the seaside village of Eze-Sur-Mer. Chelsea owner, Roman Abramovich enjoys time at the €15 million chateau in Cap d’Antibes, that he’s described as his ‘one great love’. That is of course when he’s not aboard ‘Eclipse’ – his $1.5 billion-dollar superyacht, the second biggest in the world, which is often moored off the coast.

Prime property on the French Riviera

The beauty of the French Riviera’s property market is there are no general rules when it comes to budget. Properties can start from as little as under a hundred thousand pounds, and zoom right up into the multi-millions, even within a few miles of one another. Generally, the closer to the sea and the better the view, the more substantial the price tag.

If you’re in the market for something truly spectacular, follow in Elton’s footsteps and head for the hills of Mount Boron. This highly-exclusive, mountain-top location offers woodland seclusion, panoramic ocean views and some of the Riviera’s most exciting properties. €500,000 will secure you a one-bedroom apartment. Two or three bedroom apartments cost upwards of €1.5 million. For one of the neo-classical or beaux art mansions that Mount Boron is famous for, expect to pay €4million or more. Close-by, you’ll find Saint Jean Cap Ferrat, which is home to some of the world’s most expensive real estate. Hardly surprising given Monaco is a short drive away.

In Monaco itself, penthouses start from €9 million, but the sky really is the limit. Cannes and Saint Tropez have exclusive apartments and villas, but if it’s a sweeping estate or chateau you’re looking for, expect to pay a minimum of a million euros for each bedroom.

Villefranche-sur-Mer is an attractive and highly-sought-after corner of the Riviera, and a hot favourite of the likes of Keith Richards, Tina Turner and, back in the day, Sir Winston Churchill. Famous for its apricot-coloured houses perched on impossibly steep hillsides, overlooking the sparkling waters of the Mediterranean, the town is a perfect combination of old and new. The town’s harbour is the perfect place for indulging in the café culture or enjoying a glass of something fizzy while people watching. For €500,000 here you can afford a two-bedroom duplex or apartment. If you’re in the market for something larger, expect prices to start at around €1,200,000 for four or five bedrooms and your own private pool.

If you’re happy to base yourself a little inland, your money will stretch considerably further. The beauty of the Riviera’s undulating landscape means that you can be miles from the ocean, and still enjoy sweeping views. Medieval villages like Mougins and Valbonne are excellent, more affordable options, just 20 minutes from Cannes, close to ski resorts and an hour from Nice International Airport. Valbonne is also close to Sophia Antipolis, France’s version of Silicon Valley, so you’re guaranteed a luxurious and social lifestyle amongst a dynamic international crowd.

In Valbonne, €500,000 will again stretch to a two or three bedroom apartment. For houses with five or more rooms and a pool, expect to pay a minimum of €1,190,000. If you want the Valbonne vibe without the price tag, switching your search to equally-charming villages like Vence, Tourettes-sur-Loop or even Var, the chosen spot of the Beckham Brood, your money can end up going much further, even twice as far if you’re lucky. In Var, you can buy five-bedroom villas for €500,000, but if it’s those ocean views you’re after, it’s €950,000 or more.

If your heart is set on something in the centre of Cannes, Nice and Saint Tropez, it is possible to find decent city centre one or two bedroom apartments for €500,000.