You’ve worked hard and now you’re due a little me time! But where are the world’s best retirement destinations? We asked our writers around the world to recommend a great place in their country to retire…

Sicily hasn’t quite achieved the cachet of Tuscany or Italy’s lakes, but is much more affordable and a little, dare we say, friendlier? The largest island in the Mediterranean offers plenty for retirees. Firstly, it’s bursting with character. For many centuries it was Greek, and when Archimedes leapt from his bath yelling “Eureka”, it was in Syracusa. 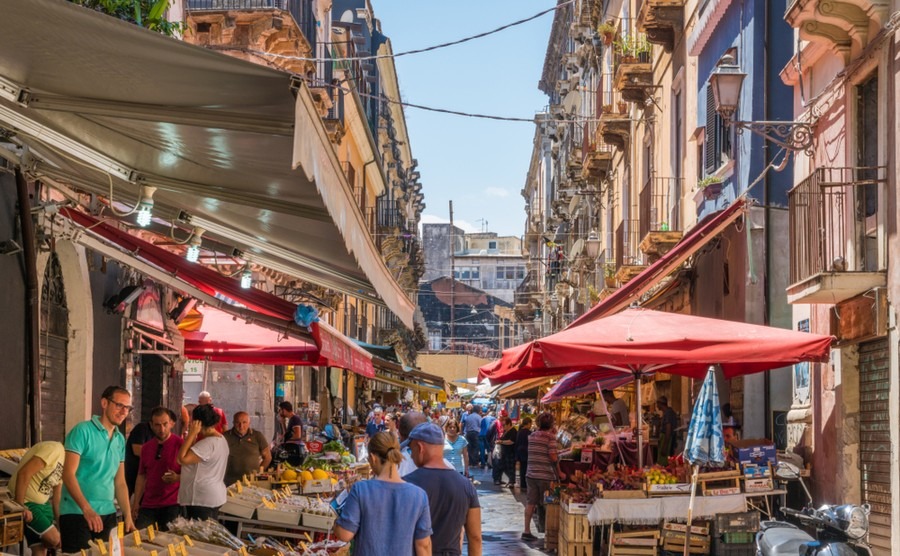 In the 1700s the island was a popular holiday home location for Italy’s wealthiest families and they out their money into astonishing baroque palaces which you can marvel at in Palermo or Ortigia.

The island is famous for its lemons, of course, the trade of which began when the British Royal Navy – briefly running the country – discovered that they staved off scurvy. These days it also has a wonderful wine trade too.

Best of all, the Sicilian people tend to be gentle, kind and friendly. Given the island’s mafia reputation, this might come as a surprise. The mafia has largely been defeated these days.

It’s a very large island so you’ll be spoiled for choice. The eastern coast, overlooked by Mount Etna gently puffing away, includes the ravishing town of Taormina, the charming old port city of Catania and the baroque beauty of Ortigia. If you’re after a full-on urban existence with everything on your doorstep, a period apartment in these well-preserved centres could be the answer.

Things are calmer in the south, where you’ll find UNESCO designated Ragusa, a hilltop Baroque city that stakes a claim to being the most picturesque on the island. Other notable towns there are Nota, Scicli and Modica.

If you want to be beside the sea, highlights on the Ragusa coastline are the fishing villages of Punta Secca and Marina di Ragusa. Worth mentioning is the tax incentive offered there. A tax scheme introduced last year means that foreign (or Italian) retirees in receipt of a pension could be eligible for 7% flat-rate tax on all their foreign income (including foreign based pensions) for the first six years of being resident in Sicily. What’s not to like!

Find homes in Italy on our portal

The two main airports are at Palermo in the north-west and Catania in the east. Each has direct flights to the UK all year in around three hours. It’s also the only Mediterranean island that you can catch a train to, all the way from London via Paris and Milan. On our last visit we met a retired British couple who drive down with their dogs three times a year.

The jewel of the Eastern Algarve, Tavira offers a traditional urban lifestyle suited to expat retirees who shy away from the busier, more international resorts west of Faro. 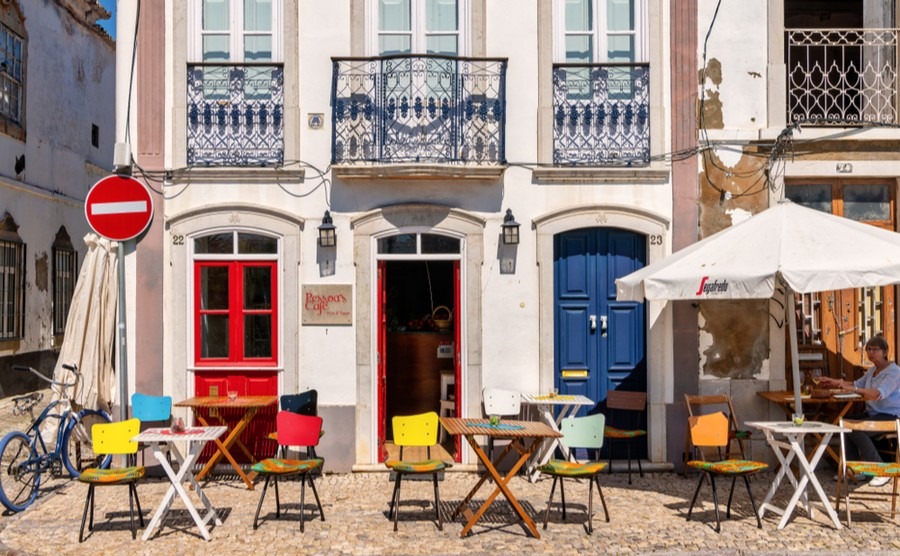 Time for coffee after a hard morning of being retired! (Lux Blue / Shutterstock.com)

Being a small laid-back city, with whitewashed streets and a historic centre, it has plenty of life year-round and every type of amenity you might need as an older person. Less developed and generally cheaper to live in compared with the Western Algarve, in the East you’ll rub shoulders with as many Portuguese people as foreigners, many of whom have second homes that they visit in the summer months. Highlights of the coastal landscape around Tavira include the Ria Formosa natural reserve area, where a ban on high-rise blocks has helped retain the area’s natural charm, and the sweeping beaches on the other side of the lagoon facing the river estuary.

These are very uncertain times, so make sure any money you send overseas is protected against sudden exchange rate drops. Find out how to lock in one rate in the free Property Buyer’s Guide to Currency.

There are plenty of places for day visits or a leisurely and – very affordable – lunch, including the nearby fishing villages of Cabanas and Santa Luzia. A short drive west is Olhão, famous for its fish restaurants, and the pretty village of Fuseta. Eastwards on the border with Spain is the charming white town of Vila Real de Santo António with its impressive old square. There you can cross the Guadiana river by ferry or road bridge to spend the day or a long weekend in the equally charming Spanish town of Ayamonte. An added incentive for retiring to Portugal is its attractive Non-Habitual Residency scheme, which delivers substantial tax savings for qualifying foreign retirees.

Tavira is only 25 minutes from Faro Aiport, so easy to reach from the UK, and receive eager grandchildren. It’s also handily [placed near the Spanish border, so daytrips to cities like Seville or Marbella can liven up your lifestyle.

Find homes in Tavira on our portal

It doesn’t take long to melt into a tranquil, rustic lifestyle in one of the villages in the Apokoronas district in western Crete. Overlooked by the majestic White Mountains, where lush green countryside runs down to the pretty Mediterranean coastline, this pocket of Greece’s most southerly island is conveniently located between the large coastal towns of Chania and Rethymnon. 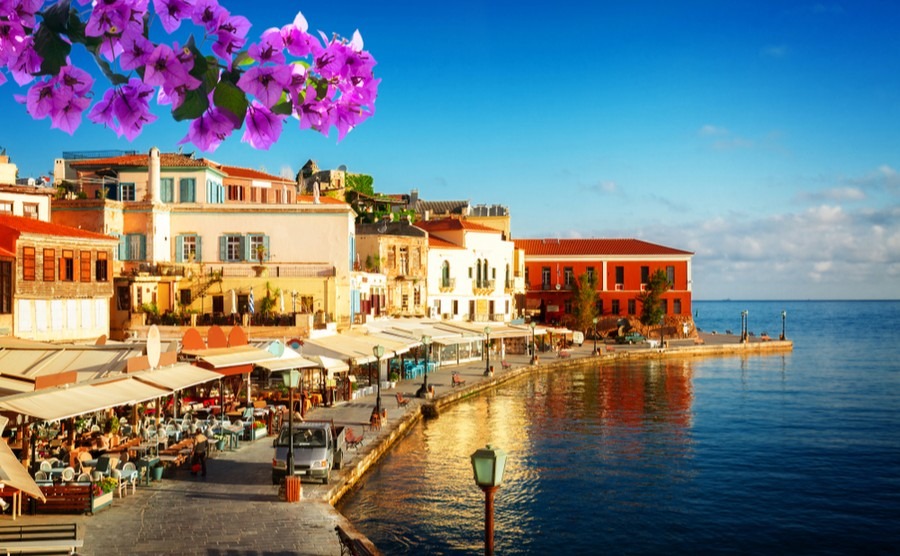 The waterfront at Chania, Crete

The area is ideal for retirees who are just as happy in a small village a few kilometres inland as front-line to the sea. Strict building regulations mean there are very few high-rise buildings along Crete’s shores, so being a mile or two inland means you should still get lovely views of the Med. Favourited beach areas there, typically built around old fishing villages, include Kalyves, Almyrida and Kokkino Horio. Inland, the area’s main town is Vamos, and traditional villages popular with expats include Stilos, Drapanos and Gavalochori.

Find homes in Crete on our portal

The go-to destination for most expats and holidaymakers in Cyprus, Paphos attracts more British homeowners than any other district on the sunny island in the Mediterranean. Many of these head to the lively town of Paphos. The choice close to town is the older part, on the hill, set back from the seafront and known as Paleo Paphos, or the lively tourist area by the beachfront, Kato Paphos. 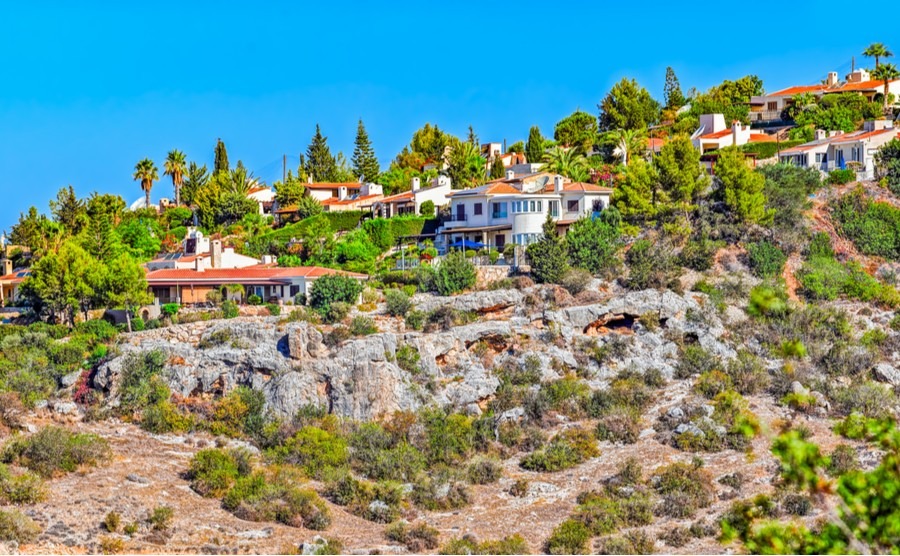 Your house in the hills near Tala, Paphos

Arguably more suited to retirees, who prefer somewhere quieter but still with easy access to the amenities and bright lights of the town, are the villages in the hills 10-15 minutes inland. Over the decades, small communities of Brits have headed to the hills, where the villages offer both beauty and liveability. For the practicalities you’ll find all the essential amenities, including traditional tavernas and coffee shops. The villages offer fantastic views too, a calmer more Cypriot lifestyle and cooler summer temperatures than the coast, helped by a gentle breeze.

Find out what to plan for your move abroad in The Currency Guide to Emigration, free to download.

Some examples waiting to be discovered include Armou, just 15 minutes from the beach, and a couple of kilometres further inland Tala, a particular favourite with expats and blessed with a lovely village square. A quieter, more traditional option and similar distance inland is Marathounda. Or, follow the coastline south from Paphos town, and you’ll find a handful of villages overlooking the sea, including Timi and Mandria. These are five minutes from the airport, ten minutes from the town and are also close to the golf resorts of Aphrodite Hills and Secret Valley.

Find homes in Paphos on our portal

When it comes to the USA, it has to be Florida. They even coined the phrase “snowbirds” to describe the folk from their northern states and Canada who move down each winter. In the US you’ll have a lot of hoops to climb through if you want to retire there permanently, but stays of up to six months per year should be possible. 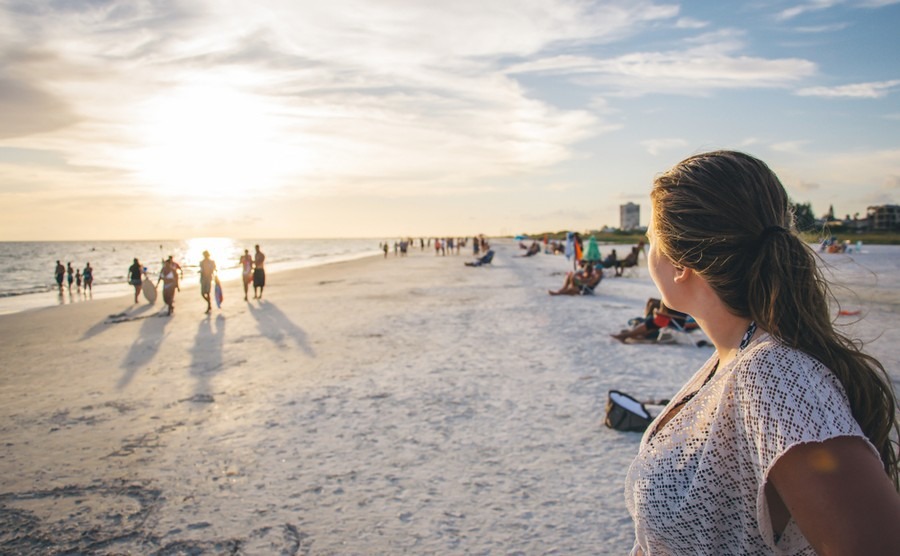 What a place to end the day! Siesta Key, Florida

Orlando, and the buzz of Disney and endless leisure attractions, will always be a favourite for family holidays and vacation homes. But what’s perfect for when the kids are young might have less appeal when they’re all grown up. The Gulf Coast city of Sarasota, just two hours’ drive west, might be a more suitable option.

Complementing its famous white beaches, including Siesta Key (voted ‘America’s best beach’ more than once), this laid-back seaside metropolis offers year-round excitement. It’s a cultural hub, with a lively art scene. It has world-class shopping and restaurants too. For anyone looking for an active retirement, Sarasota’s fantastic outdoors lifestyle, based largely around its waterfront, means you’ll never be stuck for things to do.

It has a diverse property offering too. The Keys, which run the length of the city’s coastline, offer a more holiday feel environment. Back on the mainland, small suburban communities within 10 minutes from downtown Sarasota are more residential. Or across Interstate-75 try the master-planned community of Lakeland Ranch. Its 31,000-acre site includes around 12 purpose-built villages set around lakes and golf courses.

To reach Sarasota, there are direct flights from London into Orlando (nine hours) or, more conveniently, into Tampa (9.5 hours). Or fly into regional Sarasota Airport via Atlanta, which has connecting Delta flights with the UK.

Find homes in Florida on our portal