Why the Algarve is more bling for your buck

The Algarve’s ‘Golden Triangle’ is famed for its luxury, celebrity residents and glitzy lifestyle. But if you’re assuming Golden Triangle homes are out of your price range, think again. Compared to other high-end locations in Europe, Portugal’s most glamorous deltoid is surprisingly affordable.

The central Algarve’s Golden Triangle is accessible all year by direct flight from the UK (unlike some high-end locations we could mention). However, potential buyers may be put off by its expensive reputation. After all, if Philip Schofield and Jose Mourinho can afford it, can you?

Perhaps, however, we’re just thinking about it the wrong way. The real comparison isn’t with other locations in Portugal. The comparison is with equally exclusive playgrounds of the rich and famous. And by that comparison, suddenly Golden Triangle homes sound not just very affordable, but also a somewhat undervalued investment. 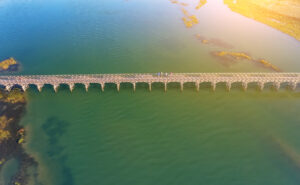 An aerial view of Portugal’s luxury spot, the Golden Triangle.

Where is the Golden Triangle?

A breezy 20-minute drive from Faro airport will take you to Algarve’s Golden Triangle. Although the Golden Triangle may sound like an artefact in ancient mythology, it’s actually the name for a luxurious region in Portugal along the southern coastline. It’s no less glorious an artefact though.

The area encompasses two famed golf resorts, Quinta do Lago and Vale do Lobo. The third point of the triangle is a little undefined. But it is generally considered to stop inland at Almancil, with Vilamoura as a kind of extension. 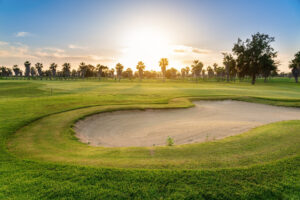 The luxury that Algarve is known for: golf resorts and beautiful sunsets. But could you have a taste of this luxury too?

Why a Golden Triangle property?

The Golden Triangle is renowned for its resorts, including some of the world’s great golf courses. Alongside them are the tennis centres, spas, marinas and other water sports opportunities. All with that cool, breezy Atlantic taking the edge off the temperatures and making waves that are much more exciting than the Mediterranean.

The pleasures include less energetic activities. The area is known for its cuisine, boasting several Michelin-starred restaurants, including Casa Velha. Although the main language spoken is, of course, Portuguese, Algarve has an international feel, and you’ll get by perfectly well just with English. Many celebrities, from football stars to television presenters, have made the Golden Triangle their home away from home.

While the Golden Triangle’s properties, lawns and palm trees are beautifully manicured, a more natural landscape can be found nearby, at the Ria Formosa Natural Park. It’s one of the Seven Natural Wonders of Portugal, and a beautiful home to a diverse range of animals including flamingos.

Does it sound amazing? But also, a little out of reach? Perhaps your purse can’t stretch quite that far. So how much does property in the Algarve actually cost? 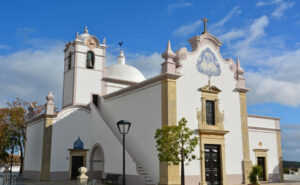 One of the beautiful sites in Almancil, part of the Golden Triangle.

The great news is that you do not have to be a football star or a television presenter to make the Algarve your home away from home. Although we tend to think of the Algarve as being unattainably expensive, there are options for those with a smaller budget.

You can find a townhouse with a pool for €650,000. You’re unlikely to find a detached property on a resort for less than a million euros.

However, there is the option of spreading your property search net wider and making the Golden Triangle somewhere you pop into rather than live in. Then family villas can be purchased close by for €370,000.

How do Algarve prices compare?

While a million for a villa is a lot of money in most people’s books, how does it compare with similar high-end locations, associated with a similar level of luxury?

You may imagine yourself soaking up sun, fashion, and jewellery in Cote-d’Azur. But, for a seafront two-bedroom apartment, prices start at €650,000. If you are looking for somewhere bigger, four-bedroom villas ready to move into start at around €1.5million.

Ibiza is famous (and maybe even infamous) for its raving nightlife. But it is also celebrated for its upmarket restaurants, boutiques, and white beaches. Yet, this luxury comes at a high cost. The starting price for a two bedroom is around €700,000. For four bedrooms and a private pool you’ll need double that amount.

With the beautiful aesthetic created by its white buildings, turquoise skies and deep blue waters, Mykonos is a luxurious location. It is one of the most sought-after Greek islands. It has the romantic spot of Little Venice and a night life comparable to Ibiza. At €450,000 the starting price for a two-bedroom apartment in Mykonos is most similar to Algarve. However, if you are looking for a property large enough to accommodate a family, the price tag will be closer to a million.

Closer to home, the post-pandemic ability to work from home has freed many of us from the commute. But this trend has sent the price of houses in the West Country rocketing. You’ll certainly be needing a million-plus for an attractive seafront property in much of Cornwall. Ironically, if it’s a holiday home you’re after, you’ll probably be able to reach the Algarve quicker than Cornwall too, from much of the UK. 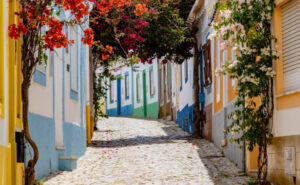 Where would you like the keys to in Algarve?

Algarve is your path to affordable luxury

By now, you are probably dreaming that you were strolling down Little Venice or enjoying a drink in the fading sunset of Cote-d’Azur. I certainly am.

While all of these places offer both style and substance, they also come enclosed by the golden gates of high price tags. Through these price comparisons, it is clear to see that Golden Triangle homes take the edge when it comes to affordability.