When can we buy property in Ireland again?

Ireland is being extremely cautious in moving out of its lockdown and that is showing in its very low infection rates. But with ‘phase 4’ in sight, what effect has it had on Irish property prices and when will we be able to travel there?

When you’re ready to go and see properties in Ireland, our free Viewing Trip Guide covers everything you need to know and look out for.

Is Ireland out of lockdown?

Ireland was looking forward to moving from Phase 3 of the reopening to Phase 4 last week, but the date will be pushed back by three weeks to 10 August amid fears over the rising number of cases. This has proven quite the blow to the hospitality industry, and in particular publicans, most of whom have had their doors closed since March. Some pubs have been able to open under Phase 3, but only those that serve meals. 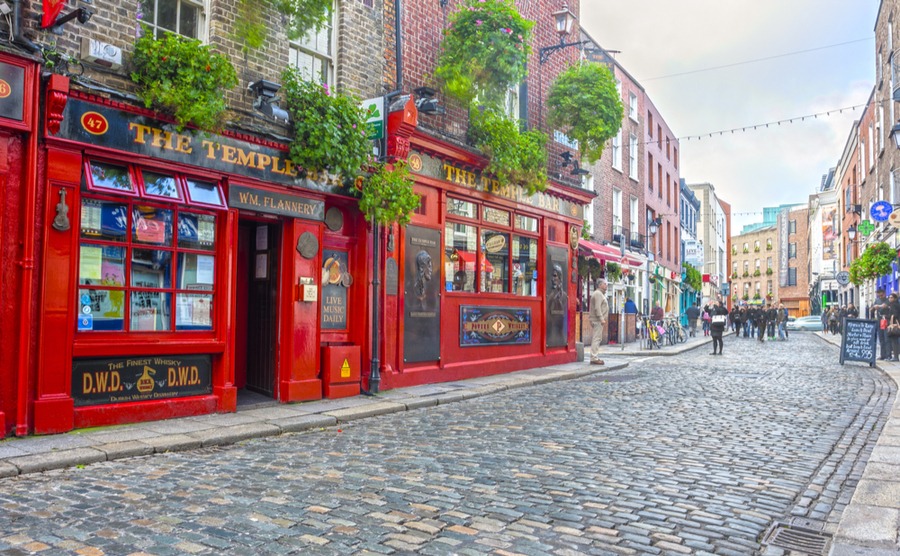 A quiet summer’s evening in Dublin

2 – Social visits to houses being capped at 10 people from a maximum of four households, to prevent clusters forming at house parties.

3 – Non-essential travel is still not recommended.

4 – Face coverings should be worn in all shops across Ireland by staff and customers.

5 – A ‘green list’ of countries people will not have to self-isolate when they return from will be published, and regularly updated.

What does Phase 3 entail?

Until 10 August Ireland will remain in Phase 3, under which the main message is to ‘stay safe’. People are able to travel anywhere in Ireland, although they are advised to check the infection rates in their destinations before doing so. If you’re planning on visiting Ireland, you can check the rates in your destination via the government’s COVID-19 data hub.

Hotels, hostels, caravan parks and holiday parks have all reopened. Occupancy rates for the year are predicted to only hit 32%, which could mean there are some nice deals to be found if you must visit Ireland. Currently, mass gatherings of 50 people inside and 200 outside are permitted.

Childcare facilities and children’s play areas have reopened. Businesses including hairdressers, barbers, beauty salons, chiropractors and acupuncturists are now in full swing. Furthermore, retail outlets are open, and cafés and restaurants have opened their doors. Also, people are able to enjoy museums, galleries, theatres and cinemas again, and fitness facilities like yoga studios, gyms and public swimming pools are all ready to rock.

Much like the UK, face coverings are recommended for locations where it is difficult to maintain social distancing, such as retail outlets, and they are mandatory on public transport. Penalties will be issued for non-compliance.

And, when Ireland moves to Phase 4, what does that entail?

When Ireland does move to Phase 4, the main changes will be the reopening of pubs, casinos and hotel bars. Larger gatherings will also be permitted, with up to 100 people allowed indoors and 500 outdoors.

Who can fly to and from Ireland?

The Irish government has published a ‘Green List’ of countries with lower COVID-19 infection rates than Ireland, traveling from which you will not need to quarantine. These include Italy, Greece, Cyprus, Malta, Hungary, Norway, Finland and the Baltic states of Estonia, Latvia and Lithuania.

You can also travel from Northern Ireland without quarantining, but not from the British mainland.

Currently, anyone travelling into Ireland from an international destination, including Irish citizens, will be required to self-isolate for 14 days. Also, every arriving passenger will have to complete a Passenger Locator Form, which will help the authorities to locate them should an outbreak be detected on their flight.

Last week, Ryanair announced that they have cancelled 1,000 flights between Ireland and the UK over August and September. These cancellations are set to affect more than 150,000 passengers who had trips planned to hop across the Irish Sea this summer.

How is the Irish property market performing?

According to the latest data from the Irish Central Statistics Office (CSO), across Ireland residential property prices have increased by 0.3% in the year to May. In Dublin, some areas saw price growth and some saw decline. For example, prices in Fingal (north Dublin) rose by 2.2%, yet in South Dublin prices were down by 1.3%.

Outside of the capital, the south-west corner of Ireland saw the biggest increase in prices at 4.3%. As of May, the median cost of Irish property stands at €260,000, and in Dublin, which has the highest prices in the country, the median price is €370,000.

Of course, Ireland’s property market has felt the effect of the nationwide lockdown. In May, just 1,937 property purchases were registered, marking a 46% decrease in sales numbers on May 2019. Of those that have been buying, almost a third are first-time buyers.

Fortunately, as of June, things do look to be on the up. According to the latest report from Daft.ie, one of Ireland’s leading property websites, more properties are being put on the market. Currently, the number of property adverts is just 15% below the rate seen in June 2019. Additionally, in June the number of sales increased to over 5,000, which is around the rate it has been for June for the last five years.

If you’re concerned about exchange rate movements when buying a home in Ireland, discover how to control the risk with the Property Buyer’s Guide to Currency, written by our partner Smart Currency Exchange.

The report also shows that the country’s rental market hasn’t been as adversely affected by the pandemic. In fact, as of June the rental rate is above all but one of the past five years. Mostly, this recovery is driven by Dublin, where there are 65% more rental properties available than in June 2019.

It seems that international buyers aren’t being put off buying Irish property, and many are happy to do so using the power of tech. Just last week, Horse Island – a 157-acre island of Ireland’s southwest coast was snapped up for $6.3 million. The anonymous buyer choose to go ahead with the sale after seeing it via virtual tour only, and after conducting almost all negotiations over Whatsapp.

In other news, this month football legend and ‘honorary Irishman’ Jack Charlton died. A World Cup winner with England in 1966, Charlton managed the Republic of Ireland team, guiding them to the quarter finals of the 1990 World Cup.

Charlton did a great deal for Irish-English relations at a difficult time and was honoured by an array of Ireland’s leading figures, from politicians to sports men and celebrities. An application has been lodged to erect a commemorative statue in his honour in Dublin.