The ten best films about Ireland

If you’re heading to Ireland, either for work or pleasure, what are the ten best movies to capture the spirit of the Emerald Isle? Here are our ten suggestions, what are yours?

Movies have been the dominant form of artistic expression for the past 100 years, and Ireland has been at the forefront of movie making. Not as an industry maybe, although the government is being energetic in trying to get movie makers to Ireland but with great Irish actors including Peter O’Toole, Richard Harris, Michael Fassbender, Maureen O’Hara, Saoirse Ronan and Liam Neeson to name just a few.

You can learn a lot about a place from what you see on the silver screen – history, culture, norms, gossip – and research doesn’t get much more pleasant that this. So pop some popcorn, download a few of these and learn about Ireland!

You can learn a lot about a place from what you see on the silver screen – history, culture, norms, gossip

Hollywood tends to have a romanticised view of Ireland and that’s never been more evident than in this romantic-comedy-drama where John Wayne returns to Ireland from the US and woos Maureen O’Hara. The lush Irish countryside has never looked more glorious and it is one of the few films to include the Irish language. Watch it as a companion piece to the considerably greyer and grittier Angela’s Ashes (1999), also about a return from America.

This 90’s classic was the first movie made of Irish writer, Roddy Doyle’s ‘Barrytown’ trilogy of novels. The film focuses on a gang of working class Dubliners who form a band that plays American soul hits. The band from the film turned out to be so good that they went on tour for real. The next two Barrytown films, The Snapper, and The Van, were just as well-received in Ireland, but perhaps not as widely elsewhere. 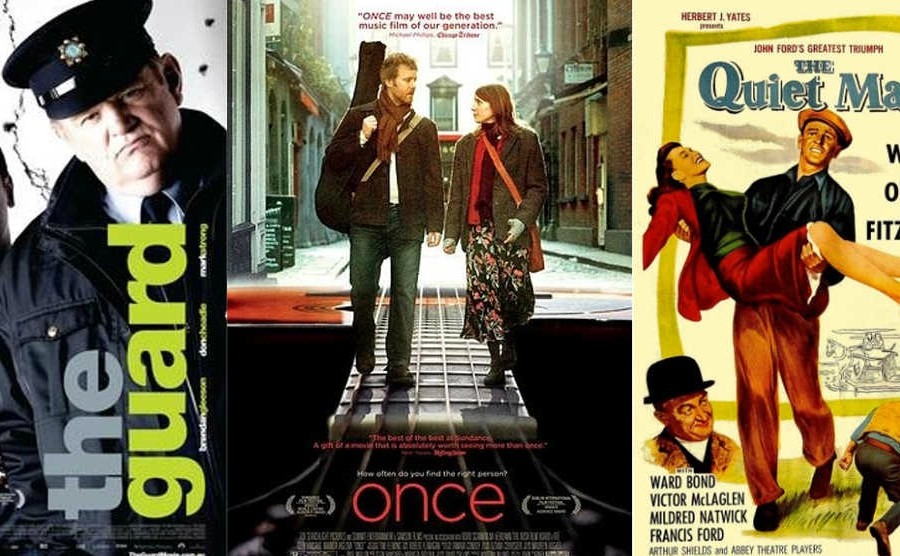 A more gentle treatment of the Irish love of music is told in this sweet romance about a musical couple who meet when mooching around Dublin. It cost €112,000 and made $20 million, including winning the Oscar for best song, “Falling Slowly”.

Ireland’s west coast is full of mysteries, myths and legends to do with the sea, hardly surprising since it claimed the lives of so many fishermen and seafarers. This movie was filmed in Donegal and deals with the myth of the “selkies” – seals that shed their skins to become human. Donegal has some splendid arts festivals where you can often see local movies. Look out for the Earagail Arts Festival running in July.

It’s always good to investigate the sense of humour of a country before you arrive and there’s no better option than The Guard, a hilarious comedy set in the west of Ireland about a foul-mouthed Guarda (police) sergeant played by Brendan Gleeson. The film follows Gleeson as he’s forced to team up with straight-laced FBI agent Don Cheadle to bring down a group of drug smugglers. Also directed by John Michael McDonagh and well worth a watch is Calvary, a drama about a priest (Gleeson) whose flock includes many who suffered sexual abuse at the hands of another (deceased) priest. Although the subject matter is undeniably dark, McDonagh sneaks in some of his trademark dark humour and the result is a fantastic film with a positive message, namely – life is hard enough, so better to focus on people’s virtues than their sins.

This Ken Loach flick took home Cannes’ prestigious Palme D’Or award in 2006, and was the highest grossing Irish film for years until overtaken by The Guard. The film is set during the Irish War of Independence (1919-1921) and the Irish Civil War (1922-1923) and tells the tale of two brothers who decide to join the fight for independence from the UK.

If documentaries are more your style, what better to learn about than the reality of the traditional Irish pub! This entertaining documentary involves a series of heart-warming, rousing, sad, and insightful interviews with pub landlords and patrons all across the country.

Heart-warming, rousing, sad and insightful interviews with pub landlords and patrons all across the country.

If you’re after a remarkable film with incredible acting, Daniel Day Lewis’s breakthrough film should be top of your list. My Left Foot tells the tale of Christy Brown, an Irish artist and author with cerebral palsy who overcame his disability and learnt to write and paint with his left foot. Both Daniel Day Lewis and Brenda Fricker, who played his mother, secured Oscars for their roles.

The Irish love of their land is the subject of this powerful movie starring the cream of Irish acting, including Richard Harris, Brenda Fricker and John Hurt. It tells the story of an elderly farmer who has put his blood, sweat and tears into making a rented field in Galway productive. When the owner is forced to sell the field, the peace of the village is shattered.

One for the children, War of the Buttons tells the tale of two Irish villages where rival gangs of children go to war. The children of Carrickdowse are prim and neat, while the kids of Ballydowse are ruffians – it’s all-out war until disaster leads the gangs to work together.