Tipped for Academy Awards success, the new film The Banshees of Inisherin is drawing global attention to two magical corners of Ireland’s wild west coast. We take a look at why the Aran Islands and Achill Island deserve to be in the limelight and could make exciting places to own a home or at least be a short ferry-hop away…

It would be hard to leave a screening of The Banshees of Inisherin without rushing to book a flight – preferably one-way – to the west coast of Ireland. Premiered at the Venice International Film Festival in September, this latest work from Academy Award and BAFTA-winning director Martin McDonagh, is set on the magical island of Inisherin. The name is fictional but the stunning landscapes and charming lifestyle that quickly cast a spell over viewers couldn’t be more real.

The film was shot in two special locations on the western coast, namely Inishmore (Inis Mór) in the Aran Islands and Achill Island, the largest of the Irish Isles. Both are highlights of the Wild Atlantic Way, a famous natural trail along Ireland’s west coast. 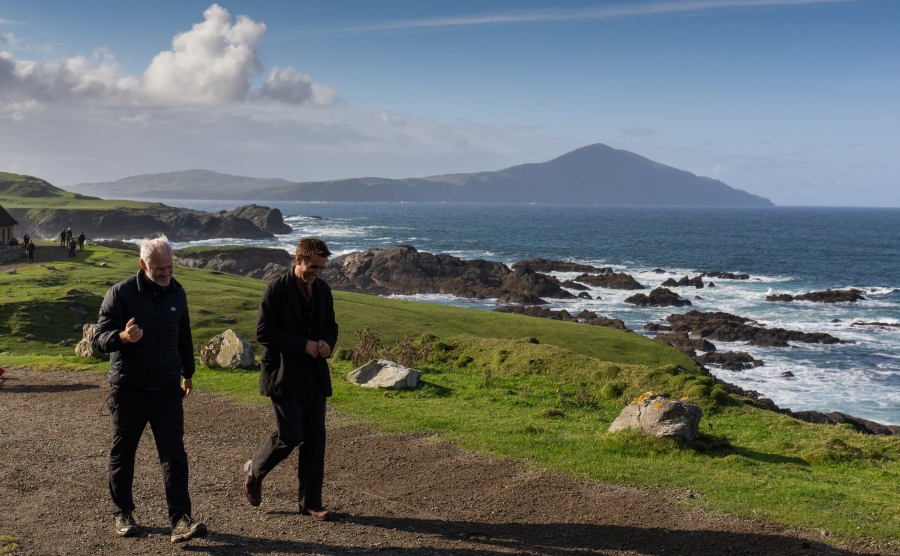 Martin McDonagh and Colin Farrell on set of the film THE BANSHEES OF INISHERIN. Photo by Jonathan Hession. Courtesy of Searchlight Pictures. © 2022 20th Century Studios All Rights Reserved.

What’s The Banshees of Inisherin about?

A frontrunner at the forthcoming Oscars, the story follows lifelong friends, farmer Pádraic (Colin Farrell) and Colm (Brendan Gleeson), who find themselves at an impasse when Colm unexpectedly puts an end to their friendship. Complementing world-class performances from the Hollywood cast are the scene-stealing locations, places like Gort na gCapall, Bungowla, Lighthouse Lane, Dún Aonghasa and Rabbit Beach in Inishmore and Keem Bay, Lough Acorrymore, Purteen Harbour, St Thomas’ Church and Cloughmore in Achill Island.

Ireland’s tourism office understandably is pleased for the promotion the film is generating. “We were delighted to see the huge success that The Banshees of Inisherin enjoyed at the Venice Film Festival last month,” said Niall Gibbons, Chief Executive of Tourism Ireland. “We’re capitalising on this positive exposure for Ireland, bringing the beautiful scenery of the Wild Atlantic Way to the attention of people in some of our main markets and inspiring them to visit.” 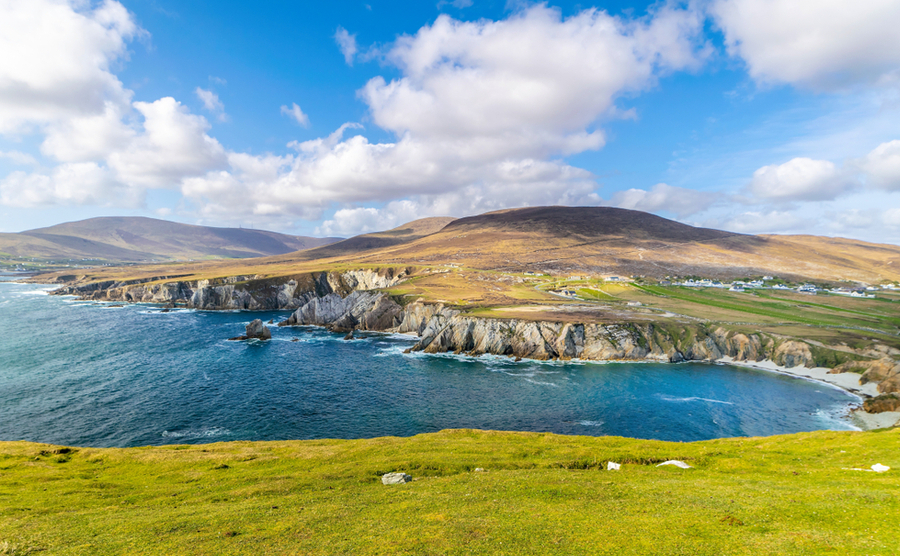 Wild and oozing Celtic spirit, the three islands that make up the Aran Islands sit proudly in the mouth of Galway Bay. They are Inishmore (Big Island), which is the largest, then Inishmaan (Inis Meáin or Middle island) and Inishheer (Inis Oírr or East island), which featured in the hit TV series Father Ted.

A choice of ferries runs between them and the mainland. A 40-minute crossing with Aran Island Ferries takes you from Rossaveal in Galway to Inishmore, Inishmaan and Inisheer. The same carrier has a service from the docks in Galway City to Inishmore. Or Doolin2Aran sails from Doolin in Clare to the Islands. There is a small aerodrome on Inishmore.

Besides fine woolly sweaters, a big draw are the ruins of historic and religious sites – some of Ireland’s oldest, which are dotted across the islands. Not forgetting the incredible scenery that mixes a gently rolling landscape covered in a patchwork of drystone walls, with limestone cliffs looking out across the Atlantic and beautiful unspoilt beaches, including one of the west coast’s finest Kilmurvey. Little wonder artists and writers have decamped to the Aran Islands for inspiration over the centuries. Walking, cycling, horse-riding (or take a pony and trap) and even Scuba diving are on offer for active types, with cosy pubs waiting for you at the end of the day. The Islands are also famous for festivals.

As the most populated and principal island, Inishmore will be your best bet at securing an Aran bolt-hole. Ireland’s biggest property portal, Daft.ie, currently has three listings there, including a detached single storey three-bed cottage on a 0.6-acre plot and with stunning views for €200,000! More ambitious buyers might be tempted by a landmark property on the island – a 200-year-old lighthouse on a 2-acre plot, yours for €550,000.

Of course, if you’d be just as happy with views of the Aran Island, take your pick from the villages around Galway Bay, or even the suburbs of Galway City. Coastal areas like Inverin, Spiddal or Carraroe, where €200,000-€400,000 will give you a choice of detached family homes with large garden overlooking the bay. 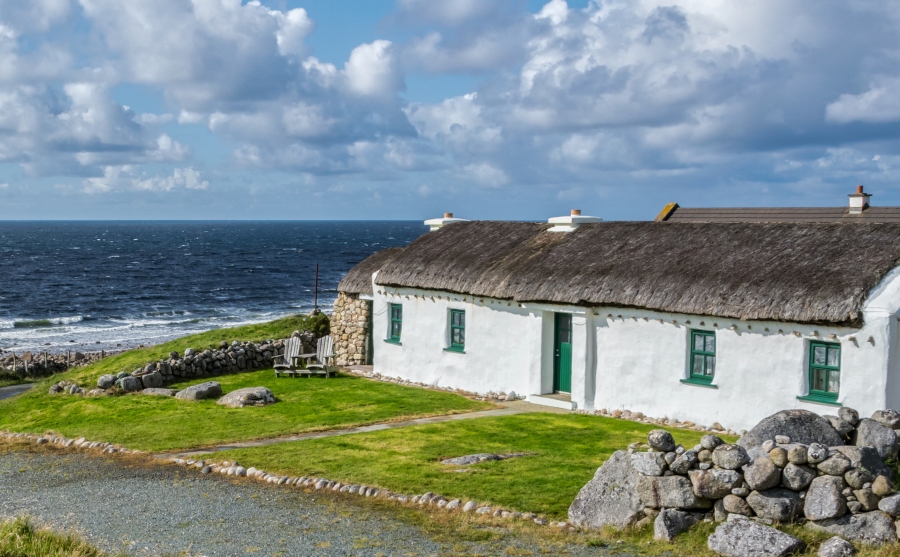 Cottage on the Achill Island coast

Head up 140 kilometres up the coast from Inishmore and you arrive at Achill Island, part of County Mayo. It is here that most of the pub scenes in Banshees of Inisherin were shot. Another independent movie, My Sailor, My Love, which had its world premiere at the Toronto International Film Festival (TIFF) in September was also filmed on location in Achill.

Known amongst Irish holidaymakers, Achill is home to the acclaimed Keem Bay, which is regularly voted best beach in Ireland and has even ranked alongside the world’s best beaches. There are four other Blue Flag beaches. Much larger and more mountainous, the scenery is arguably more dramatic than the Arans and includes Ireland’s highest sea cliffs (third highest in Europe). The island has a lively wellness, and arts and crafts scene, from book festivals and brewing to yoga and seaweed bathing. For lovers of the great outdoors, it delivers on land and water, offering everything you could want from an outdoors lifestyle in Ireland. Reaching Achill is easy, thanks to a bridge connecting it to the mainland at the Corraun Peninsula.

There’s more to choose from on Achill, compared to the Aran Islands. A budget of €150,000-€300,000 should give you a small selection of bungalows and houses near amenities and the beach, more for something new. Otherwise, snap up a building plot for circa €100,000 and create your own home.