Remember, remember… the 1st of May or 23rd of June

Moving to Ireland doesn’t mean missing out on traditional British celebrations, it’s an opportunity to find even more exciting ones, especially with the country’s mystical Gaelic past (and enjoying of a drink or two)

It’s that time of year again: when the clocks go back and leaves fill the pathways. Fireworks illuminate the night sky, in the UK at least. Things work a little differently in Ireland and, perhaps unsurprisingly, Guy Fawkes Night – which has its roots in an anti-Catholic celebration organised by James 1st after the attempt on his life – gets short shrift. But don’t worry, you won’t miss out of fireworks, hot sausages and bonfires.

As it is Ireland, the night is accompanied by music, singing, dancing around the fire and a drink or two.

You will normally see fireworks at St Patrick’s Day celebrations in March – you can’t buy them yourself – and large bonfires are lit for Halloween. The period at the start of November is a traditional Gaelic festival anyway, called Samhain, that James 1st was probably adopting when he came up with Guy Fawkes Night in the first place.

In Limerick and Wicklow another Gaelic festival, Beltane, is celebrated on 1st May also with bonfires. It is particularly marked at the Hill of Tara in County Meath.

In some parts of Ireland, 23rd June is referred to as Bonfire Night and fires are lit to celebrate St John’s Eve. The origins of the day’s celebrations probably come from pagan times with it being the longest day. The Church then converted it to a religious celebration to commemorate Saint John. People traditionally used the occasion to pray for good fortune and a bountiful harvest, taking ashes from the bonfire and spreading them across the land they wished to be blessed. As it is Ireland, of course, the night is accompanied by much music, singing, dancing around the fire and a drink or two. 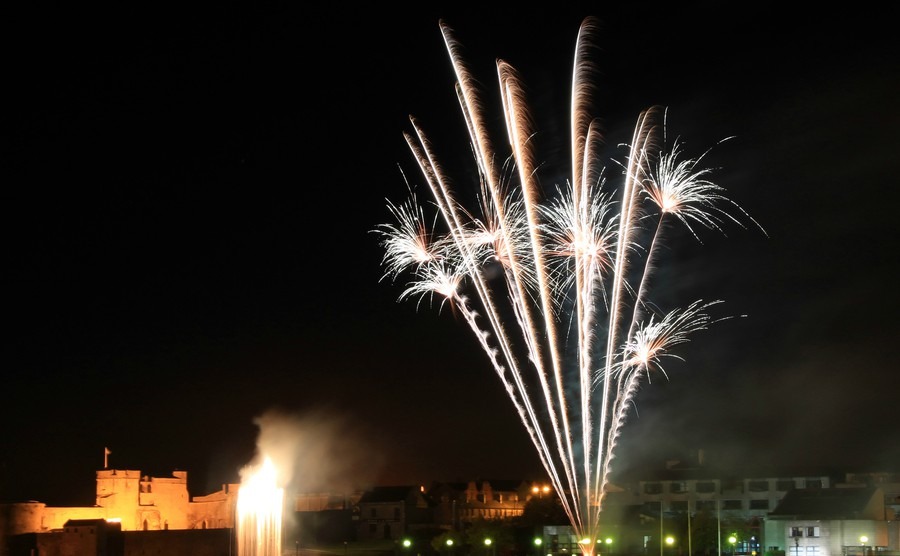 Fireworks over the castle in Limerick

In Limerick and Wicklow another Gaelic festival, Beltane, is celebrated on 1st May also with bonfires. It is particularly marked at the Hill of Tara in County Meath.

Where the UK has toffee apples, jacket potatoes, and treacle toffee, traditionally on Irish Bonfire Night people will eat ‘goody’. This is an Irish dessert, similar to bread and butter pudding. It is made by boiling the bread in milk and adding in a mixture of sugar and spices.

To learn more about Ireland, and how to begin your journey towards moving there, contact our Resource Team on 020 7898 0549.