The Irish climate might have a reputation for ‘four seasons in one day’, but it’s not always deserved. Today, we’re exploring Ireland’s warmest, driest and sunniest spots where you could buy your dream home.

For those hoping to move to Ireland to enjoy retirement, you’ll be pleased to hear that the nation regularly appears in polls of the best places to retire in the whole world. It’s not hard to see what makes it so popular. Ireland is a relaxed, English-speaking nation that is close to the UK. Brexit isn’t an issue as the British and Irish have always been allowed to live in each other’s countries, and that will continue.

Ireland is known the world over for its natural beauty. Unfortunately, another thing that Ireland is known for is its rain. Where do you think all those green fields come from! While consistent rain might not bother everyone, if sunshine does matter, some places are better than others. So today we’re taking a look at Ireland’s weather. We’re showing the sunniest, driest and warmest spots, and revealing what these areas offer those searching for their dream location. 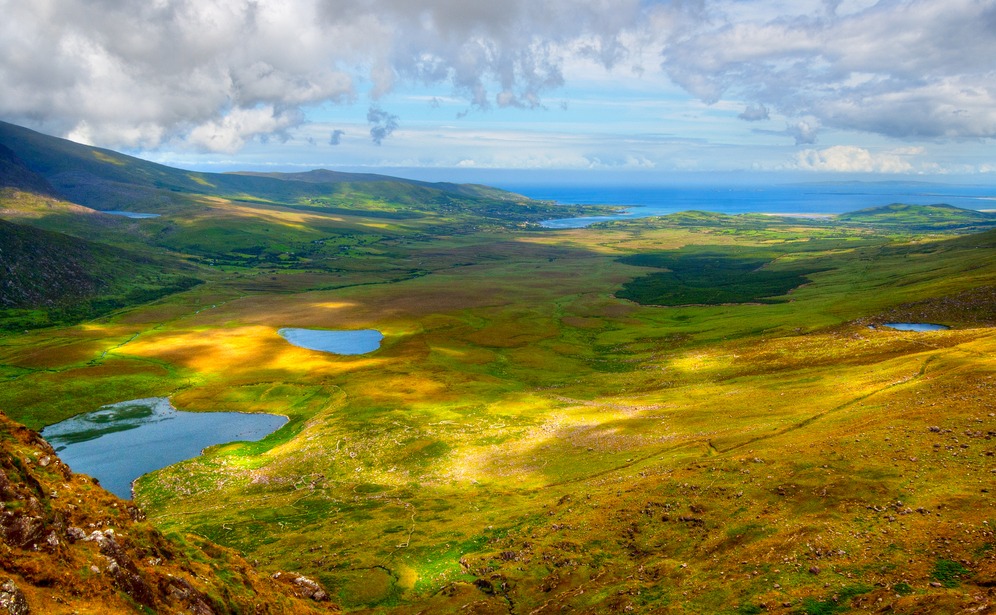 Four seasons in one day, on Ireland’s west coast

How bad is Irish weather really?

While Ireland can certainly be more than a little soggy, temperatures rarely dip much below 10ºC. If the mercury should hit 20ºC, expect everyone everywhere to be completely delighted! During summer, you’ll be able to enjoy those long days that we also enjoy in the UK, where twilight doesn’t really hit until 10pm. Snow is very rare, but rainfall is as common as the rumours dictate. The west coast in particular experiences some kind of precipitation for 200 days of the year.

One thing you should prepare for when you move to Ireland is for weather to change at the drop of a hat. One minute, you can be wearing a t-shirt sitting in the sunshine, the next a torrential shower will pass overhead. For this reason, most self-respecting Irish folk never leave the house without an umbrella and at least a couple of layers. So, where is the best weather in Ireland?

For the most sunshine…Rosslare, County Wexford

Ireland’s south east coast has long boasted the nickname, the ‘sunny south east’ and weather records consistently back this up. In fact, the popular tourist hot spot receives 300 more sunshine hours every year than the average place in Ireland. This typically totals 1,598 hours of sun per year, and 4.38 hours per day. Furthermore, in summer, you can expect around seven sunshine hours every day.

What else is great about Rosslare?

Rosslare Strand is a popular seaside village just down the road from Rosslare Europort. It’s handy having a port on your doorstep as it allows you to hop on a ferry and be back in the UK in just over three hours and 15 minutes. The village’s main beach has earnt Blue Flag status, which means it’s one of Ireland’s (and the world’s) best! If you’re happy to brave the cool waters, swimming is a delight. You can also enjoy strolls along the seafront, a round at one of many nearby golf courses or a game of tennis if you’re in the market for something a touch more active.

As it’s such a popular spot with tourists and has been for many years, you can expect to enjoy all the amenities you’d expect in such a busy spot. If you’re in the market for a holiday rental that will guarantee high tourist foot fall, there are bargains to be found, which you won’t struggle to fill and there are property letting companies in town just perfect for managing the property for you while you aren’t in the country.

If you’re looking to source work in Rosslare when you move to Ireland you could set your sights on the nearby docks where there are a range of opportunities available. Tourism is also big business, in addition to roles in property management and holiday lettings.

Get your copy of the Negotiation Guide to make sure you get the best deal possible from your estate agent.

To avoid the rain… Dublin

While it definitely rains in the Irish capital, it receives a lot less rain than the west coast, with less than 800mm of rain every year. Rather than there being a particularly rainy time of year, Dublin receives showers throughout every season, but fear not… usually a little sunshine isn’t too far behind. Temperature-wise, the average temperature in Dublin City ranges from 5ºC in winter, to 16ºC in summer.

What else is great about Dublin?

As it’s the country’s capital, you can expect to enjoy all the perks of living in a cosmopolitan spot when you choose Dublin for your move to Ireland. You’ll find more bars, restaurants, cafes and shops than anywhere else in Ireland and there are corners of town to suit all tastes and budgets. The international airport and ferry port grants easy access back to the UK or to elsewhere in Europe and the train station links the city with the rest of Ireland. Ireland’s economy is currently booming, and nowhere are the effects being felt quite so strongly as in the capital. If you work in tech, IT or pharmaceuticals, job opportunities with some of the world’s leading corporations are easy to come by. This only looks set to continue as more companies move their European headquarters to Ireland in light of Brexit.

One excellent thing about life in Dublin that appeals to young families, professionals and those looking to retire here is that you’re never too far from the countryside. You can be at the coast or out in the hills in under an hour. The Wicklow Mountains are just over an hour’s drive. Some of the most upmarket parts of Dublin are located along the coast, including Bray, Rathfarnham, Churchtown and Blackrock, to name a few.

What else does Valentia Island offer?

Valentia Island is a beautiful spot located off Kerry’s picturesque Iveragh Peninsula in the Atlantic Ocean. It is linked to the mainland at the charming village of Portmagee but you can also hop on a car ferry, which operates from April to October. There are a couple of main settlements on the island – Knightstown and Chapeltown, yet less than 800 people call the island home on a permanent basis. Due to its isolated location, we tend to think it would be more suited to retirees looking for a peaceful spot for a permanent residence or a holiday home to visit during warmer months.

Valentia Island is an ideal location to situate yourself while you explore the delights of south west Ireland. It’s possible to be on the Ring of Kerry in just over an hour or to Cork in slightly more than two hours. The island is home to its own unique microclimate which attracts plants and wildlife you’d be more familiar with in the likes of South America, Australia and New Zealand, and it’s a bird watchers dream! Keep those eyes peeled for peregrine falcons, gannets, kestrels, guillemots, puffins and razorbills. If you’re a fishing fanatic, you’ll be endlessly entertained with the opportunities to catch eels, sea bream and even lesser-spotted dogfish! The island holds the record for many of the country’s largest catches!

Split the cost – and double your purchasing power – by purchasing with family. Find out how in our Guide to Buying with Family.