We discuss Irish rules of the road and let you in on all the essential information you require before getting behind the wheel in Ireland.

Ireland is a beautiful country, and due to its relatively small size – it’s easy to navigate by car. Sure, in the cities public transport is excellent, but outside of these busy areas, much of the country isn’t serviced by buses and trains. This means, if you’re keen to explore the more hidden, more charming corners of The Emerald Isle, you best do it behind the wheel of your car. Although the Irish also drive on the left and there is ample road signage to ensure you won’t get lost, there are a number of subtle differences to Ireland’s roads brush up on before your arrival. Today the Ireland Property Guide discusses all you need to know about Irish roads.

If you’re caught by the Guarda – you’ll be issued an on the spot fine. If you don’t have the cash on you, expect to be accompanied to a cash machine!

Rules of the road

First, let’s cover the basics. In Ireland, cars drive on the left, and give way to the right. Signposts are in English, and sometimes Gaelic, and distances are quoted in kilometres. Bear in mind that if you cross the border into Northern Ireland, the road signs will switch to miles per hour. As is to be expected, the driver and all passengers are legally required to wear a seatbelt at all times, and it is illegal to operate a mobile phone while driving a vehicle. Children under 12 or 1.5 metres in height must sit in the back seat. It’s also illegal to use your car’s horn at any time between 11:30pm and 7am.

When driving a vehicle you must always ensure you have your driving license, vehicle registration documents and proof of insurance, just in case you get stopped by the police. The minimum level of insurance required to be on the road legally is Third Party, and your insurer should offer you a free Green Card, so that you can prove your insurance status quickly. You can legally start learning to drive at age 17. 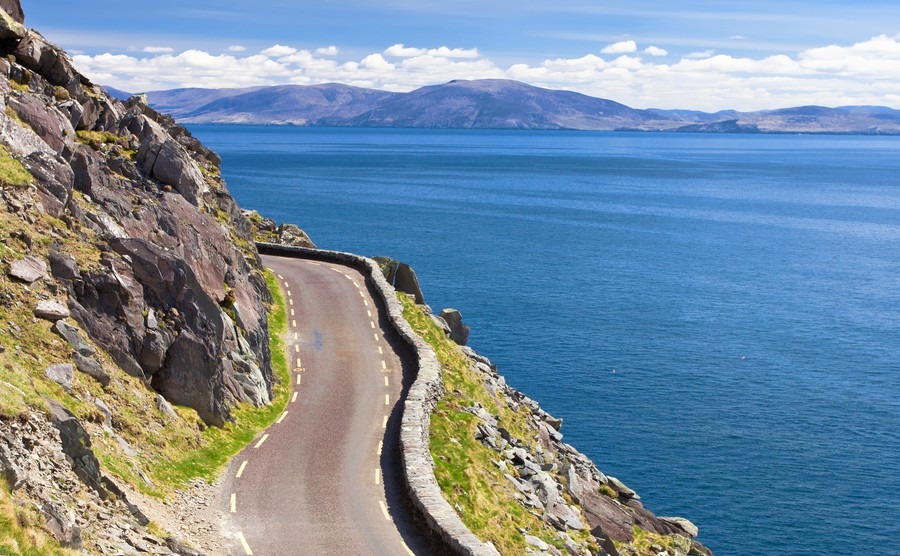 Ireland boasts some of the most spectacular scenic drives in the world.

Driving under the influence of alcohol is taken very seriously in Ireland, and the limits are much lower than in the UK. Those who’ve just learnt to drive, or whose work involves having passengers in their vehicle (taxis, mini-bus drivers, etc) are limited to 20 milligrams of alcohol per 100ml of blood. The limit for fully licensed drivers is 50 milligrams of alcohol per 100ml of blood. For most, these limits will mean that you can’t even have one drink before getting behind the wheel. Drink driving fines are steep – a two-year driving ban and a fine of €1,500 (£1,300).

Ireland’s roads are of a generally very high standard. There are four categories of road to be aware of:

Motorways – As is to be expected, Ireland’s motorways are the largest of the countries roads. They take you on the most direct route from city to city, and are labelled with a capital M and a one or two digit number. On some of these roads, you will be expected to pay a toll – on the M6 and M7 for example. If you need to get somewhere in the quickest time possible, these motorways are your best option, but don’t expect the views to be as interesting as elsewhere.

National Primary Roads – You’ll identify these roads by their green signs and the fact they are labelled with an N and then a number from 1 to 33. These are the next largest type of road. You’ll find them linking together larger towns, and they’re often dual carriageways.

National Secondary Roads – To confuse matters, these secondary roads linking smaller towns to each other, are also labelled with an N, and then a number between 51 and 82. These roads are narrower, more windy, and more akin to what you might find in rural areas of the UK, meaning that in some spots the road might only be wide enough for one car to pass at a time.

Regional Roads – These are the smallest of Ireland’s roads and can be identified by the letter R and three numbers. These are the narrowest and most windy of the bunch, and they link together the smaller towns and villages. 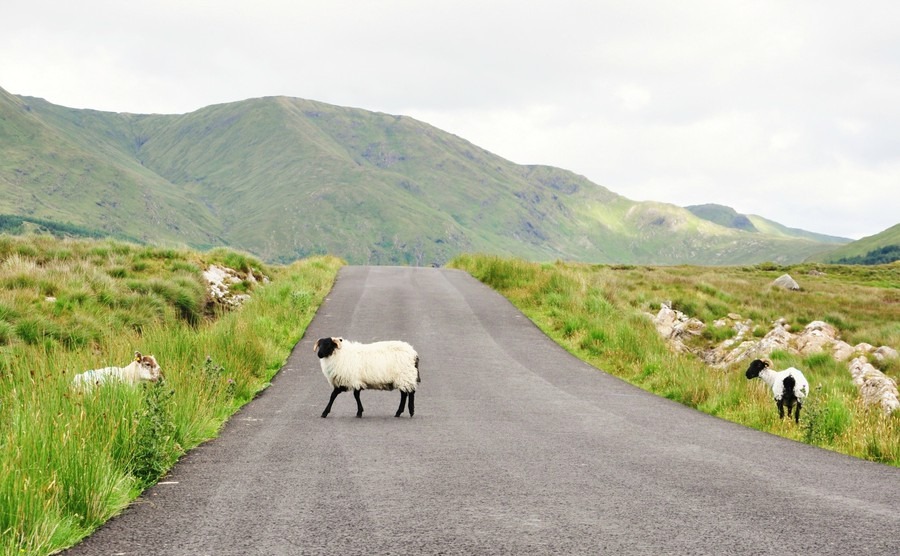 You’ll need to watch out for surprise hazards on Ireland’s most rural roads.

Can you drive legally in Ireland?

If you hail from within the EU, you can currently drive legally in Ireland on your existing licence. If you hail from outside of the EU, Ireland also has a reciprocal agreement with a number of nations that allows them to drive easily in Ireland. You can check whether you’re eligible here. If you’re not listed as one of the countries that Ireland has a reciprocal agreement with, you can drive in Ireland on your current licence for up to a year, at which stage you will have to apply for an Irish license, and will have to take a driving test!

If you’re planning on touring around Ireland, it’s important to note that due to the country’s sparse population, there are nowhere near as many service stations as we’re used to in the UK. Before you set out on any journey, you should always be sure to have a full tank. Should you find yourself running low on fuel, exit to the nearest town and fill up there.