A property in Malta, your home from home?

Malta is a Mediterranean island with stunning weather, plenty of work, and highly attractive property. Not only does the name mean “honey”, but you’ll be wowed by the warm, honey-coloured stone of the “houses of character” too. Will a property in Malta be the sweet spot for you?

Malta is just about the most southerly part of Europe, just 300 kilometres from the coast of Tunisia and south of Sicily. It is made up of three Mediterranean islands – Malta, Gozo and Comino – and has a total land area of just 300 square kilometres. Indeed, you could walk across each island in one day.

The population is just 370,000, but it is nevertheless the most densely populated country in Europe. Don’t imagine that that means it isn’t beautiful, however, After all, England is the second most densely populated yet we have plenty of green and pleasant areas too! The capital is Valletta, but the largest city is Birkirkara. Around 2% of the population are British according to official figures.

House prices have risen steadily due to five main factors. Firstly, the Individual Investor Programme (aka “Golden visas”) was introduced five years ago and has brought an influx of high net worth individuals. Secondly, this has helped to boost the already high number of foreign workers in Malta. That, thirdly, has boosted disposable income generally. Fourthly, Malta has low interest rates, which has meant buyers can afford higher prices. Lastly, there are exemption from stamp duty for first-time buyers.

There are also subsidies for renovation work. This may be of particular interest to overseas buyers, many of whom tend to choose older properties. They are known as “houses of character”, and can be stunningly beautiful, hewn from a golden coloured stone. The locals, like in many countries, tend to prefer moving to a smart new development in the city.

Buying costs are reasonable, ranging from 5.5% to 7.5% of the property value, but selling costs can be higher. There are also limitations on who you can sell to as a non-resident.

The north of the island, Gozo, Sliema and St. Julians, and some areas in the south are particularly popular with international buyers. In the north of Malta, Qawra, Bugibba, St. Paul’s Bay and Mellieha are mostly sought after for holiday homes, and very popular with British tourists. Nice holiday apartment in these areas fetch over €200,000.

Many international buyers choose to buy a property in Gozo instead. It’s easy to reach from the mainland and has charming, quaint farmhouses and a more mellow, older community. 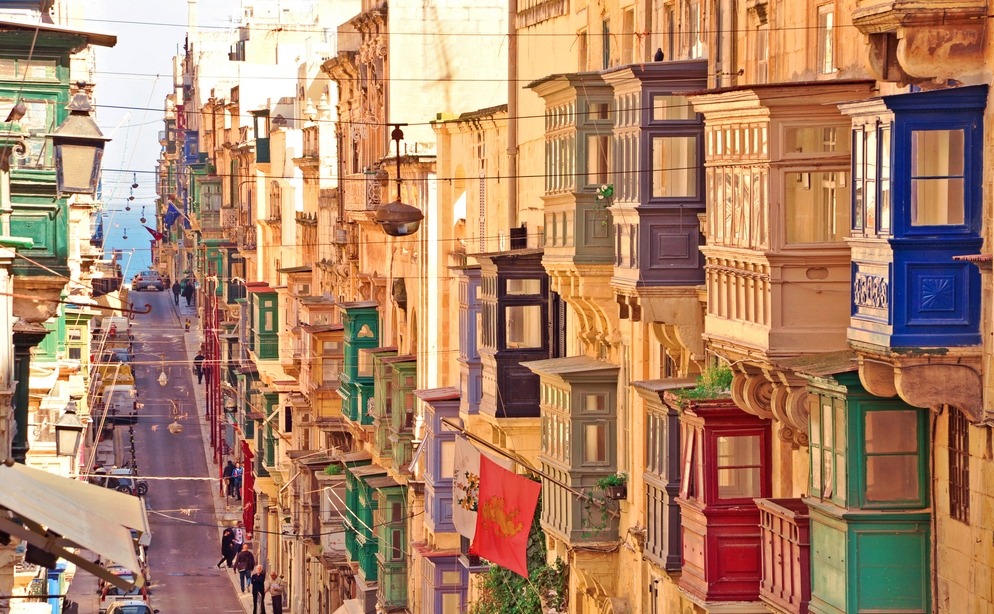 A street in Valletta, the capital of Malta

Setting up a business in Malta is easy, with similar systems to the UK and English an official language, and it is well positioned between Europe, Africa and the Middle East. Malta is now a major hub for IT and software firms. Malta is also a popular destination for medical tourism, both for surgical procedures that would take too long on the NHS and for cosmetic and plastic surgery. Prices are around a third less than in the UK, and medical services are good.

The working atmosphere is much like in the UK – 40 hours a week, finishing each day between four and six.

The flight time from the UK is three hours. Most of the UK’s budget airlines fly to Malta, from around £130 return in summer and £60 return in winter.

Malta has very mild winters and long, sunny summers with the heat tempered by sea breezes (except when the sirocco blows high temperatures in from north Africa). There is a reasonable amount of rain in winter, leaving the summers with guaranteed sunshine.

The Maltese do like a party and the island has a terrific social scene. That includes lots of live music, great restaurants and particular good shopping. The waterfront at Valetta is beautiful and lively, while Birgu, the ancient capital, has a lovely quiet atmosphere but some nice wine bars. There are plenty of smart new developments too, especially Sliema and St. Julians.

Don’t forget Gozo too, for a more relaxed Maltese experience. As a popular spot for retirees there is lots for older people, and all with guaranteed sunshine in the summer!

The British ruled Malta as a dominion for 165 years until it joined the Commonwealth in 1964. Britain’s influence can be seen in Malta driving on the left and English being an  official language. That includes in government offices, which certainly helps the property-buying process and life as an expat. It also means that researching the property market and finding national statistics is relatively easy. You’ll feel at home on the high street too, with shops like Debenhams, Marks and Spencer, Top Shop and many others to choose from.

As newly-weds, Princess Elizabeth and Prince Philip spent happy years in Malta while he was still serving in the Royal Navy. They returned for their 60th wedding anniversary in 2007. Could you be happy there too?