Expat hotspots: 5 places the British love to live in

If you’re wondering where to settle in New Zealand our list of the five places which attract the most Brits should come in handy.

Choosing where to live in New Zealand can be a tricky business when all of its locations offer a wonderful outdoorsy way of life and stunning scenic surroundings. You want a location that suits the needs and tastes of you and your family, but where do you start? To help narrow down your options, we’re running through five locations that have proven particularly popular with British expats…

The majority of us who make the move to New Zealand end up living and working around Auckland.

The majority of immigrants who make the move to New Zealand end up living and working around Auckland – the country’s biggest conurbation and nicknamed the City of Sails. If you’re not sure where to settle, it’s a fantastic place to base yourself while you establish where might suit you better. While the city has undeniably high property costs, it’s relatively easy to find somewhere to rent, there are job opportunities aplenty and it is a beautiful city by anyone’s standards. Every suburb you visit in Auckland boasts its own unique personality so it shouldn’t be too hard to find the place that suits the needs of you and your family.

There is always something to do in Auckland, be that an open-air cinema, a gallery opening, a popup restaurant, or simply enjoying a fine cup of coffee by the water. The city also offers the best domestic and international flight connections and the highest paid job opportunities. From Auckland, you can enjoy day trips to Rangitoto Island and Waiheke Island, Piha Beach is just a half an hour drive out of the city, and Mission Bay is absolutely perfect for summer barbecues at the beach. 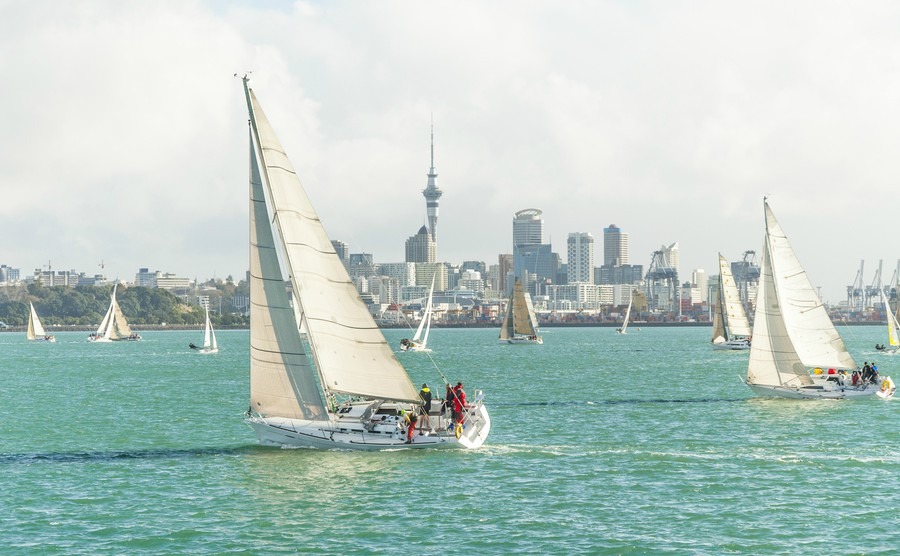 A commute into the city with a difference, in the City of Sails.

Christchurch is dubbed the Garden City due to the attractive parklands and gardens found within the city. Home to around 350,000 people, this is the second largest city in the country, making it a great spot for job seekers and families, as well as those in search of the perfect place to retire. Although housing does come with a city price tag, the cost is around 20% cheaper than property in Auckland, and far cheaper than the UK. Christchurch is considered one of the prime locations in New Zealand for families due to the excellent schools, universities and colleges, the range of activities you can enjoy, its excellent climate and fantastic social facilities. If you’re searching for the optimum work-life balance, this could be the city for you.

Many Brits admit that they are attracted to Christchurch because of its similarities to the UK.

Many Brits admit that they are attracted to Christchurch because of its similarities to the UK. There is less crime and a generally nicer climate, but one thing it does have (which many expats elsewhere claim to miss) is four distinct seasons in the year. During summer you can expect temperatures to average 22.5°C and in winter, temperatures drop to a respectable 11.5°C.

Christchurch residents get to enjoy the perks of city life: culture, employment and education, all while being on the doorstep of New Zealand’s incredible great outdoors. Spend sunny days at New Brighton and Sumner beaches, and winters zooming down the slopes in the nearby ski resorts of Mt Hutt, which is just 90 minutes drive from the city. By basing themselves in Christchurch, lovers of the outdoors enjoy the chance to explore some of New Zealand’s most beautiful natural locations including Aoraki Mount Cook National Park, Arthur’s Pass National Park, Hanmer Springs, Banks Peninsula and Lake Tekapo. Spend weekends whale watching, cycling, sailing, hiking, or if that sounds too much like hard work, there are a wealth of churches, museums, galleries and a cathedral to explore.

Tauranga attracts Brits who want to live by the ocean, but who can’t necessarily afford to in the country’s bigger cities.

The largest city in the beautiful Bay of Plenty is another location enticing British expats with its beautiful scenery, sparse traffic, affordable homes and a microclimate, which sees 2260 hours of sunshine every year. This is a laid back, coastal city within easy reach of Auckland. 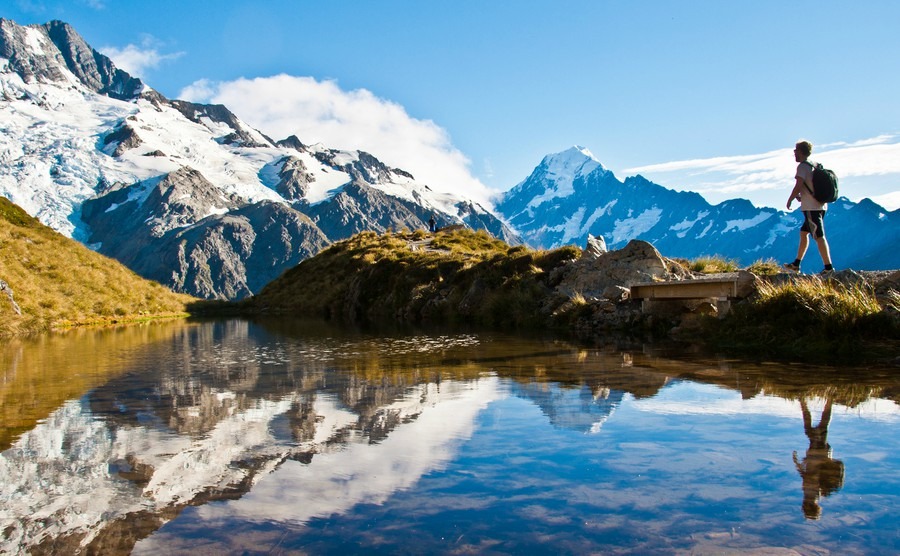 Settle in Christchurch and you will have the South Island’s natural wonder on your doorstep.

As well as the pleasant year-round temperature, Tauranga attracts Brits who want to live by the ocean, but who can’t necessarily afford to in the country’s bigger cities. Tauranga is located within four hours’ drive of the nearest ski resort and close to picturesque landmarks including the Coromandel Peninsula, Rotorua, Whakatane, Taupo and Hamilton. The city has a wonderful array of restaurants to choose from, many of which only use the finest, locally grown, organic ingredients. The cultural calendar is also impressive – keep an eye out for the Seriously Good Food Show and National Jazz Festival Tauranga. Tauranga is a wonderful place to raise a family due to its wonderful sense of community… and the sunshine!

If you’re relocating with your family, two of your major priorities when choosing a location will be employment opportunities and high standards of education – two things for which Dunedin in the South Island’s Otago region are particularly well known. While the climate may not be as warm as elsewhere in the country, Dunedin is family friendly, affordable and close to the great outdoors.

According to a 2016 Quality of Life Survey conducted by New Zealand’s city councils Dunedin is the best city to live in in all of New Zealand.

According to a 2016 Quality of Life Survey conducted by New Zealand’s city councils Dunedin is the best city to live in in all of New Zealand. The reasons cited include affordable housing, safety, civic pride and the fact that residents are more physically active and less likely to be stressed than their urban counterparts. Sold?

Dunedin has a lot to offer Brits – deserted beaches, friendly locals, ocean and harbour views, mountains and a lot of well-maintained green spaces within the city. The ocean and hills are only ever 20 minutes away no matter which suburb you decide to settle in. This is an excellent spot for active folk with great opportunities for water sports, biking, climbing and hiking. 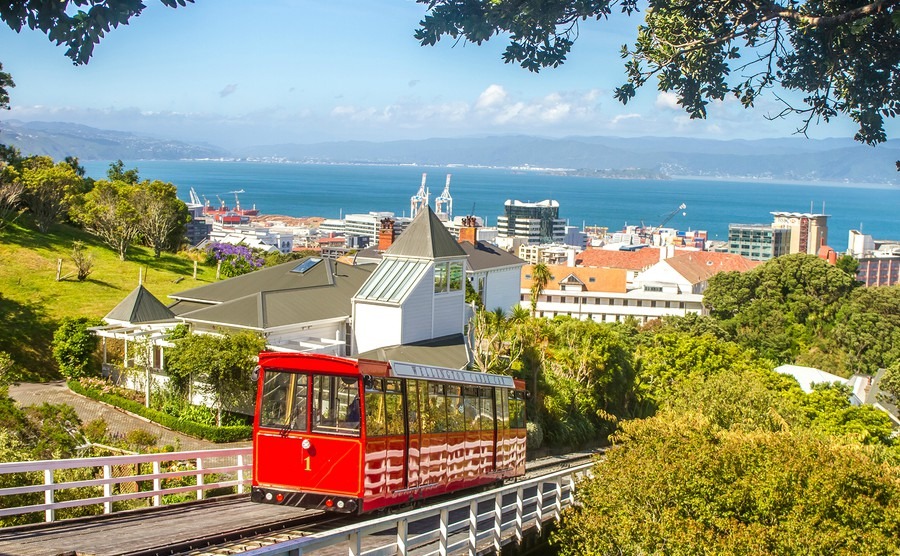 Wellington may be a small capital city but it has a huge amount to offer expats.

Wellington is a fabulously friendly capital city, which welcomes international arrivals with open arms. Although small in size, the city boasts everything you’d expect from a capital. In fact, there are reportedly more bars and restaurants per capita in Wellington than there are in New York City. Wellington’s transport network is regular, affordable and allows you to reach every suburb in the city with ease, whether that be in the city centre, by the beach, or up in the mountains.

Why Brits love it?

Wellington offers Brits an outdoor lifestyle with all the perks of city living. The city’s harbourside location and 425 hectares of surrounding bush mean that residents can enjoy water sports, sunbathing, swimming, hiking, climbing and everything in between without having to venture too far. (And if you have an accident, the ambulances are free!). The city is at the heart of all of New Zealand’s arts and culture scene offering galleries, museums, cinemas, live music and a thriving film industry, nicknamed “Wellywood”. There’s a lively nightlife scene and world-class restaurants. Did we mention the craft beer? Expect to chance upon many an experimental brewery or experimental bar as you explore the city. Wellington not only offers a wealth of employment opportunities (most are employed by the government), but it provides a perfect combination of sophisticated city living with the warmth and personality of a village.