Escaping the crowds in New Zealand

Many of us head to New Zealand looking for emptiness and tranquillity, then end up in a modern, crowded metropolis like Auckland. So if you fancy really getting away from it all, where can you go? Here are our four top suggestions.

Crowds, in New Zealand? With just 18 people per square kilometre in New Zealand compared to 271 in the UK, you might think escaping the crowds wouldn’t be much of an issue. However, a surprising number of the 4.8 million population live in just a few cities, with a third of the population squeezing into Auckland alone. To that you have to add the 3.7 million tourists who arrive each year, and not just for fleeting visits; the average stay is 19 days.

While most visitors will opt for the Waiheke Islands (which are wonderful) and Rangitoto, Tiritiri Matangi Island is a great option for those not wanting to compete for space

So if you went to New Zealand to escape the madding crowd, you might want to find your own little corner once in a while. Today, we’re revealing some more off-the-beaten track locations for you to try when you arrive in New Zealand…

Along the north-east coast of the North Island you’ll find the Hauraki Gulf which covers a spectacular 4,000 km² area between the Auckland Region, the Hauraki Plains, the Coromandel Peninsula and Great Barrier Island. The Gulf has a marine park that you can access via a ferry from Auckland. While most visitors will opt for the Waiheke Islands (which are wonderful) and Rangitoto, Tiritiri Matangi Island is a great option for those not wanting to compete for space with camera-wielding tourists. The island is home to New Zealand’s largest population of endangered birds, untouched sandy beaches and thick forest, teeming with wildlife. 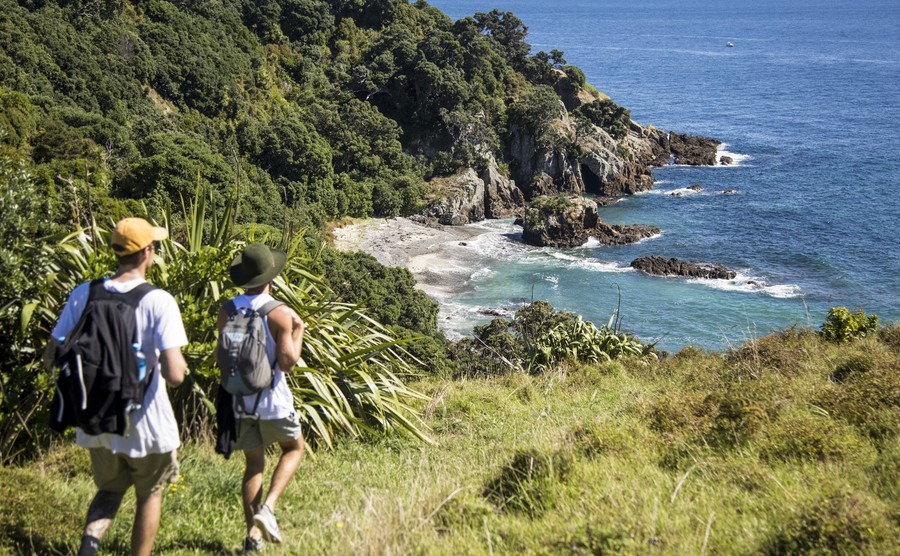 While a lot of beaches in New Zealand have the potential to take your breath away, if even one other person on the beach feels like a crowd, head to Doubtless Bay in Northland. The area offers a similar beach experience to the Bay of Islands, but with far fewer people. The Bay boasts 60 kilometres of sandy, uncrowded beaches, where the waters are safe for swimming and snorkelling. If you’re lucky you might even spot a pod of dolphins or orcas playing around in the water.

To reach this secluded spot you’re going to have to put in a little bit of leg work, with a 12.4km hike from Marahau – a small settlement in the South Island’s Tasman Region – through the wonderful scenery of Abel Tasman National Park. The rewards you reap at the end make it more than worth it. The secluded Bay is home to crystal clear waters and golden sand. It’s the perfect spot to spend a day and an evening (there’s one tiny campsite close by) pretending you’ve been washed up on a tropical island. If a four-hour hike sounds like your idea of hell, it is possible to take a boat or arrive by kayak.

Wherever you wish to live in New Zealand, knowing how to negotiate for your property should get you a little more house for your money! Download our guide: How to Negotiate Abroad.

This could be the most romantic spot in New Zealand. If you’d like to delve a little deeper into Māori culture, consider a visit to Mokoia Island – a sacred island in the centre of Lake Rotorua. You can’t live there, or even stay there, but on your visit you’ll be told the greatest love story in Māori culture – the tragic and doomed romance between Hinemoa and Tutanekai, who tried to swim to the island wrapped in leaves to meet each other. Don’t try this yourself!
The island is tiny, but beautiful, consisting of a lava dome that rises 180 metres above the surface of the lake. It’s a great spot for bush walking, bird watching, and lounging in the wonderful geothermal springs, while learning about Māori cuisine and culture.