What type of property should you buy in the UK?

Before you call a British estate agent, you’d better bone up your estate agent terminology. Read our guide to types of property in the UK and you won’t get your semi mixed up with your maisonette. Even more importantly, what is the average price for each property type?

According to British government data, a third of British homes are semi-detached houses, just over a quarter are terraced houses and just under a quarter are detached houses. A far smaller number are flats, with just 12% of the housing stock being purpose-built flats and 5% being converted flats. “Others” comprise 1%, which is intriguing! House boats, caravans, hobbit holes?!

Go out of London though, and British homes look very different

The numbers may surprise anyone more used to London, where high-rise living appears to be the norm. Go out of the capital though, and British homes look very different. The data explains a lot. Is the British obsession with the weather down to some 80% of homes having an outdoor space? Certainly houses with gardens tend to come with a premium price tag.

But what do the terms mean? When you start looking at property in any new country, one of the first barriers is the jargon that agents use. What’s the difference between a finca and a cortijo in Spain? What makes a French maison de maitre different to a manoir? What’s a condominium when it’s at home! In the UK too, we have our arcane and mysterious language (and you find many estate agents speaking foreign languages either). So here we offer some explanations.

A house is taken to mean a self-contained home with a front door and more than one bedroom. If it is completely separate from other buildings and standing in its own grounds it is detached. It might only be separated by the narrowest of alleyways, but that is enough to classify as detached. Detached properties, with their extra privacy and quiet, tend to be considerably more expensive. If the house shares a wall with one other property, it is semi-detached. The average price of a detached house in the UK is £342,000,  according to the UK’s official house price index. Semi-detached houses average £214,000 nationally.

A terrace of houses is a row of houses, all sharing walls. Although much more common in towns, it’s not uncommon to find a little terrace deep in the countryside. Being cheaper to produce they were often put up by a landowner for the staff, or near a quarry or mine. Terraced houses are higher density, although they often have small gardens or yards. Sharing a wall with at least one neighbour, they are cheaper than detached and semi-detached houses, averaging £180,000 across the UK. Interestingly, this is less than flats, although “end of terrace” houses are often a little more expensive.

In densely packed cities, terraced houses may be referred to as “back to backs”. Essentially this means that they are in a block where the only external wall is at the front. Unlike normall terraced houses they have no rear yard or garden. Although the average price of a terraced house is over £180,000, you can find a back to back in a city such as Leeds for £50,000. 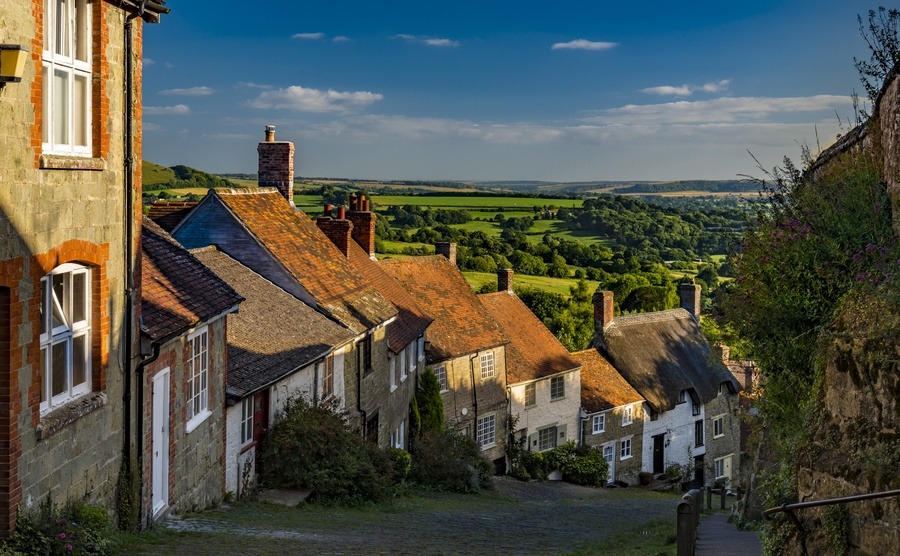 Other styles of house

A bungalow is a house all on ground level. Although cheaper to produce than houses, given the high price of land in the UK their relatively inefficient use of land, and their popularity among the elderly and disabled, means they can be expensive. They also have the potential for extension into an extra storey, which means you will rarely have a problem selling a bungalow..

A cottage is a small detached house. Although associated with a more rural setting, some survive in towns and cities too. The picture-postcard British cottage has a thatched roof, low beams and a climbing rose around the (very small) door. This is, of course, onlly a small percentage even of cottages, but there are plenty of them in the countryside.

You can easily pay more for a beautiful older property, and while they tend to hold their value they will often cost more for upkeep and have planning controls that limit what you can do with them. If you are buying a ‘listed’ property there will be strict controls on building and how the property is decorated.

The great advantage of houses, along with the relatively good sound insulation, the garden and often a garage, is that they are normally sold freehold.

Terraced houses meet a block of flats in south-east London

Although often referred to these days as apartments, flats are properties within shared blocks and developments. Their technical definition is that they are single storey properties in a building of more than one storey. Although self-contained, they will often share an entranceway with other properties. Flats usually do not have private gardens – if they do, they are referred to as ‘garden flats’ – although they will often be surrounded by communal gardens or landscaping.

Don’t get ripped off! Whatever types of property in the UK you’re after, how do you ascertain the true market value when you’re based overseas? Read our guide: How to Negotiate Abroad, for advice on calculating a fair price.

Flats may be purpose-built, such as residential tower blocks, or they may be larger houses that have been divided. These are usually known as a flat conversion. Converted houses lend themselves to being “maisonettes” These are flats that comprise two floors, usually with a separate entrance. Property prices in the UK being so high, many large houses will have been converted. These offer the chace of living in a beautiful old house but without the expense, including upkeep.

Flats may either be owned freehold or leasehold, and if buying a lease you do need to be extra careful. Also beware poor quality older conversions. Ensure your surveyor checks for sound proofing.