Adventurer or city slicker… where in New Zealand best suits your lifestyle?

When it comes to moving overseas, there’s so much to consider when choosing where to settle down. Obviously the more practical things come first, such as proximity to schools and career opportunities, however there’s more to life than work! That’s why we’ve found the best areas for every New Zealand lifestyle.

Whether you’re most relaxed at the beach or find comfort in the hustle and bustle of city life, read on to find out where in New Zealand best suits your lifestyle. 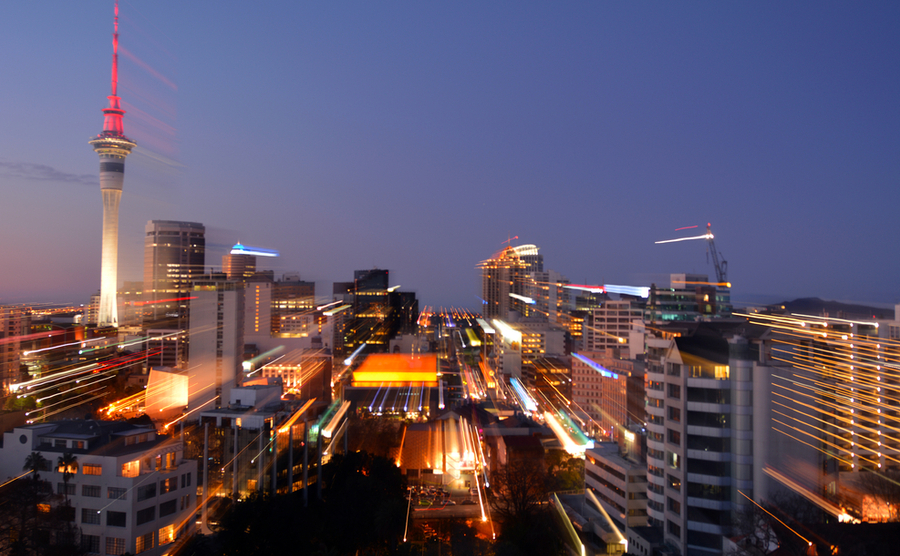 Auckland is an obvious choice for those used to city life. There’s plenty of job opportunities and lots to do in the city.

However, it’s no London. Despite being New Zealand’s largest city, Auckland has a relatively small population of just over 1.5 million people – 31% of New Zealand’s entire population.

If one of your major reasons for relocating is to find a better work-life balance, this is an ideal spot. By day you can be working hard in the city’s modern, clean, waterfront Central Business District (CBD), but within just half an hour, you can be at the beach, hiking one of hundreds of fantastic trails, or even be arriving at one of the islands surrounding the city, which are popular with holiday makers and wealthy homeowners. Auckland is known as ‘The City of Sails’ for good reason – it’s located on two scenic harbours, Waitemata Harbour on the Pacific Ocean, and Manukau Harbour on the Tasmanian Sea.

You can enjoy the perks of city life in Auckland while also living in the suburbs. Areas like Grey Lynn and Takapuna are super popular with expats, specifically families as there’s plenty of parks, local markets and shops. 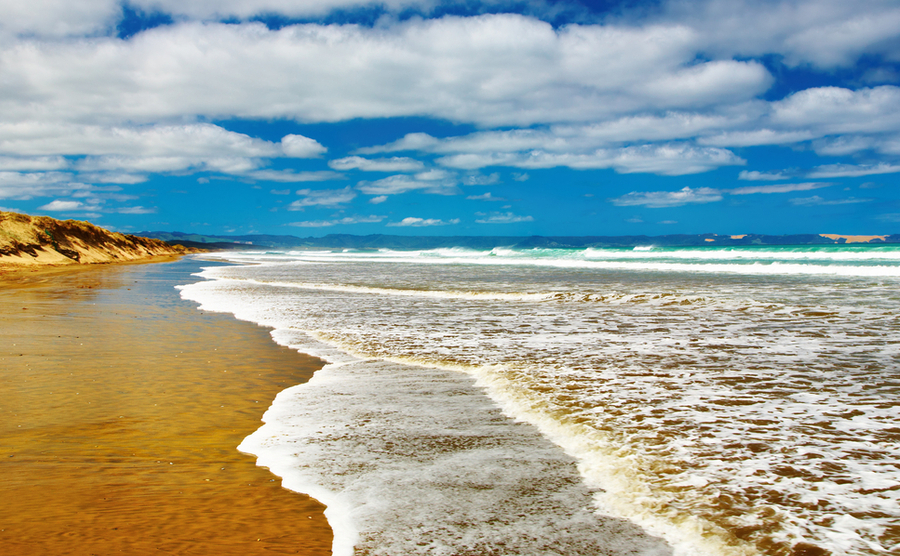 New Zealand’s Northland is a region that reaches from Auckland all the way to the top of the country. If you’re an active beachgoer, you’ll love Ninety Mile Beach. It actually spans 88km of the western coast, which explains where it got its name. The beautiful beach welcomes bodyboarders, horse riders and windsurfers.

Northland is a subtropical region and rarely loses the sun. Kiwi’s actually call it ‘the winterless North’ for that exact reason. If you live for the outdoors, surfing and swimming, Northland will tick all your boxes. Plus, you’re never more than 50km from the coast.

Approximately 30% of the Northland population identify as Maori and Whangaeri, the region’s only city, has a large Maori community. Speaking of community, it lies at the heart of all things Northland and there’s always something going on, whether that’s a local food festival or music event.

If you are considering Northland, make sure to take a trip to Mangawhai, it’s the best place to stargaze at night as the town has such low air pollution. 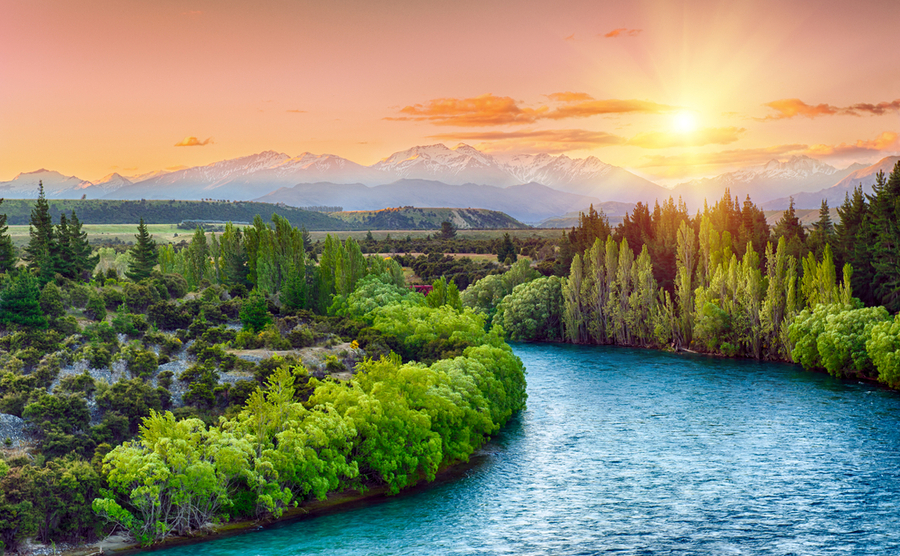 Beautiful sunset over the bend of the river Clutha with Southern Alps peaks on the horizon, New Zealand

Officially known as Te Waipounami, the South Island is the larger of the two islands in New Zealand.  Renowned worldwide for its natural beauty, the scenery here will no doubt take your breath away.

If your idea of a good time is getting lost in nature, South Island is for you. There are glaciers, art trails, hiking trails and much more.

And the scenery isn’t all green! Surprisingly the whole country doesn’t look like The Shire (Lord of the Rings). South Island is home to stunning beaches, aquamarine seas, snow-topped mountains and crystal-clear rivers.

The country’s tallest mountain, Aoraki/Mount Cook towers over the island at a staggering 3,724 metres high. The climate on the South Island is rather dramatic in the sense that it differs either side of the Southern Alps. The Canterbury plains are typically arid and dry, while the western coast is often drenched in rain which waters the rich green forest in the foothills. 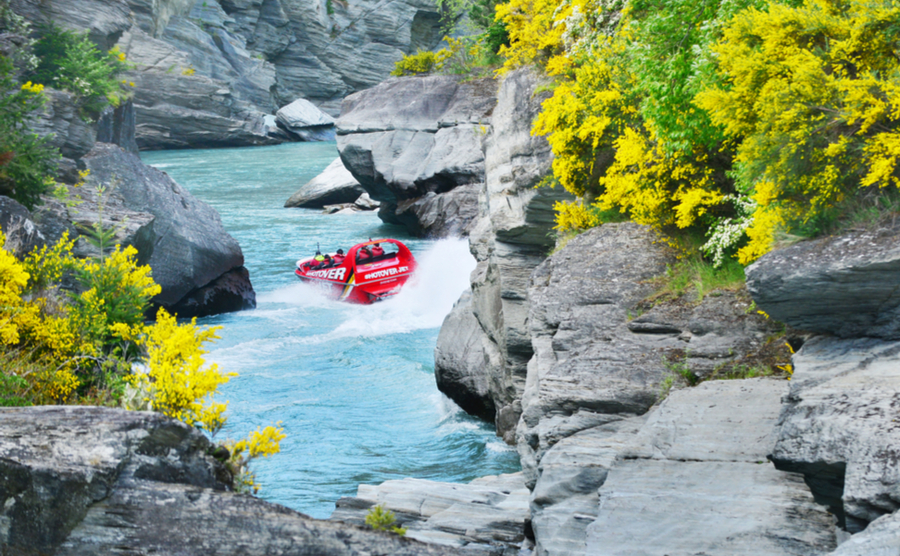 Queenstown, New Zealand is on the shores of Lake Wakatipu and is renowned for its adventurous spirit. Lots of tourists land in Queenstown on their way to explore the region’s vineyards and caves, so if you’re a budding B&B landlord, there’s ample opportunity for you in Queenstown.

There’s so much to do in Queensland, adventure-seekers could never be bored You can ski for most of the year and if you’re brave enough, you can try canyon swinging, sky diving and bungy jumping all year round.

For the mellower adventurers, there’s many walking tours to discover and cycle routes – both road riding and backcountry trails!