Eight great places to buy a holiday home in the UK

The British love a holiday home! Although we may associate them with buying “a place in the sun”, there is a lively second homes market within the UK too. For buyers from abroad, a holiday home in the UK offers the chance to enjoy Britain’s most beautiful towns, villages and coasts yourself, or to rent your property out. Or maybe a bit of both. So here are eight amazing places to start your search for a holiday home in the UK.

It’s not just Whitstable’s close proximity to London – it’s less than two hours’ drive and just 70 minutes on the train – that has made it a holiday home hotspot for Londoners escaping “the big smoke”. Lining this attractive coastline are unique weatherboard houses that leave you thinking you’re somewhere in New England. While in town people flock to gorge on the oysters, which have long been a local delicacy, and enjoy a vibrant live music scene in its collection of traditional pubs. Charles Dickens often stayed in the town and it still has a strong literary heritage, not least as a home from home for the Hampstead literati.

Getting here: London City Airport is the most convenient, at around 90 minutes. From either Heathrow or Stansted Airports are a similar traveling time by car, or 2.5 hours by train. From Gatwick takes just over an hour by car. 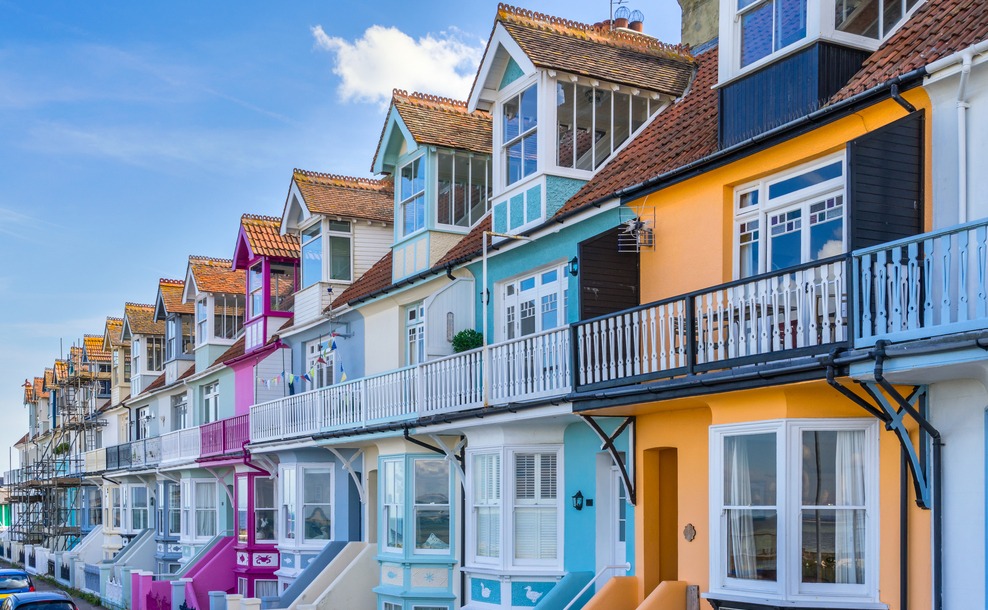 Colourful seaside homes in Whitstable, easy to reach from London

Tenby on the South Wales coast is a tale of two towns. In the summer it has a boisterous, holiday-resort vibe such is its popularity, while in winter it returns to being a sleepy seaside spot. One thing that remains permanent throughout the year is its class. Rather than offering the typical promenade-and-pier that some consider a bit tacky, Tenby is more picture postcard perfect thanks to its pastel houses, Georgian mansions, Norman walls and medieval streets. Its location on the edge of the Pembrokeshire Coast National Park adds to its appeal for people who love a spot of fresh sea air.

Holiday home prices: Cottages within the main town sell from around £200,000.

Getting here: From Heathrow the journey is over 200 miles, or a painful six-hour train journey from London. Closer airports are Cardiff, Bristol or Birmingham. 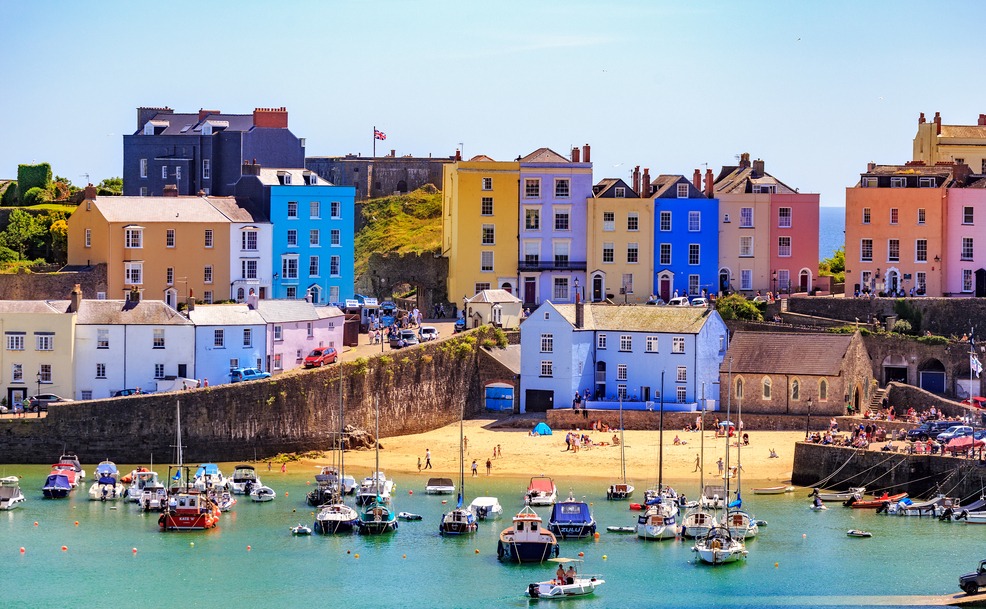 Picking just one holiday home hotspot in a county with such an abundance of bucolic splendour is not an easy task. So for St. Ives to have made it as Cornwall’s representative on our list speaks volumes about this pretty seaside town. It has a rich history for attracting artists down the ages, including Turner, who are inspired by its turquoise bays, lush vegetation, slate roofs and church spires, all of which basks in piercingly bright light. Today St. Ives remains an artistic centre. There’s even a branch of the Tate Museum around here, to complement the galleries that line its cobbled streets.

Getting here: St Ives is over 250 miles from London, on a busy road. You can take a sleeper train from London, or a regular train, of course, in about six hours. By air, there are airports at Newquay and Exeter.

The end of the summer season in early September is a great time to look for a bargain home. Read our guide, How to Negotiate Abroad, to work out your strategy for getting the best property for the best price. 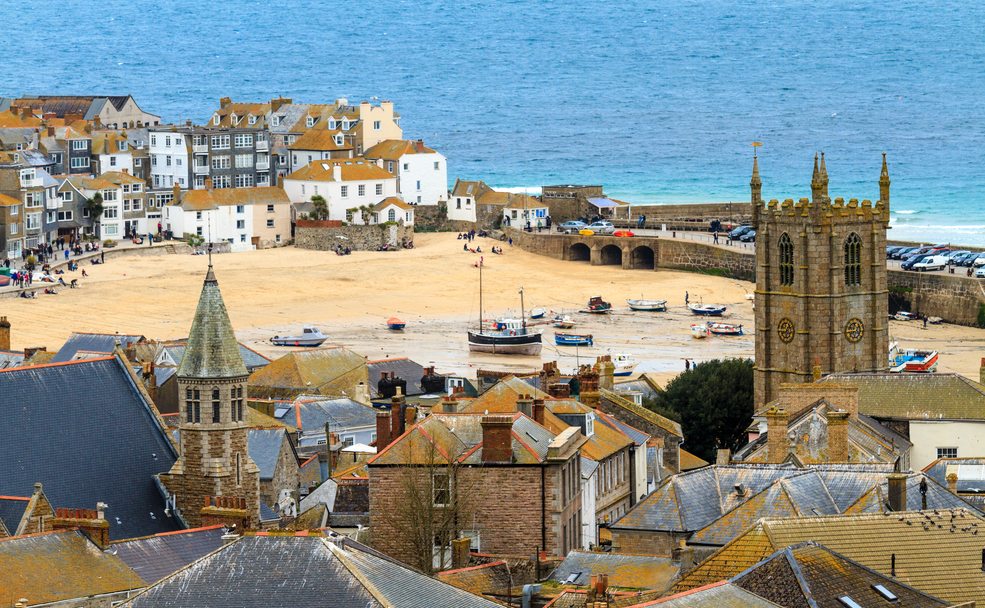 Known as “the Venice of the Cotswolds”, Bourton-on-the-Water sits on the banks of the River Windrush. Its clear waters gently trickle through the village under low bridges, past ancient cottages, quaint tea rooms and cosy pubs. You might not be able to float by in a gondola, but you will be able to visit the local Cotswold Motoring Museum. The village’s location in the heart of the Cotswolds, in between Cheltenham and Oxford, make exploring this Area of Natural Beauty very convenient indeed. It’s handy for the Cheltenham Festivals – both the horse racing and literary variety – or for visiting offspring at the Cheltenham Ladies’ College. This is a posh sort of area at the gorgeous heart of the Cotswolds.

Holiday home prices: Village houses and maisonettes start at £250,000, but for an attractive detached house you’ll probably need to double that.

Getting here: It’s a well connected area, with Birmingham, Bristol and Cardiff airports all within striking distance. Heathrow is a 90 minute drive. 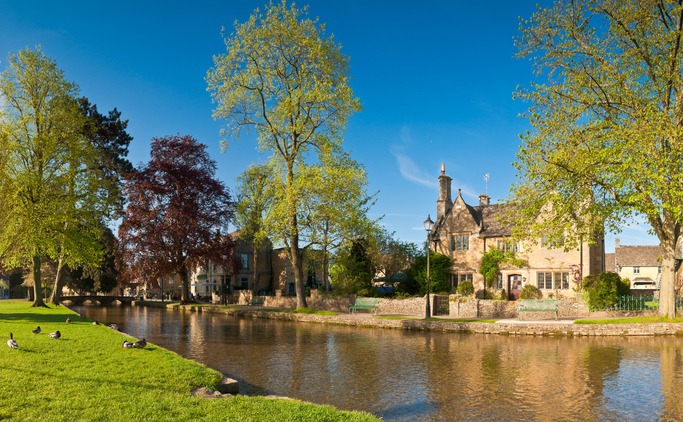 Brighton gets more visitors and the moniker “London by the sea”, but Eastbourne is much more liveable. It’s old-school: calm, genteel, classy and leafy, with an attractive promenade and newly rebuilt pier. There’s a lot going on in Eastbourne, including a superb annual air show, tennis tournament, three good quality theatres and some excellent shopping. The summer concerts on the prom are straight out of Britain in the 1930s, in a good way! The South Downs, Glyndebourne opera house, Charleston farmhouse (home of the Bloomsbury literary set) are on the doorstep and London is just 80 minutes away by train.

If you’re returning to the UK from abroad, the weak pound since the Brexit vote is working to your advantage. But how can you ensure that continues? For a detailed explanation of how you can protect your protect budget from currency risk, read the Property Buyer’s Guide to Currency. It is written by our currency partner Smart Currency Exchange, rated “Excellent” on Trustpilot.

With property, the local saying is “Don’t buy east of the pier dear”. The western side of town nearer to Beachy Head is considerably classier. Property tends to be large Victorian houses divided into flats or purpose-built blocks of up to ten storeys. If you do go east, Sovereign Harbour is an attractive modern waterside development with cinema and restaurants.

Annual hours of sunshine: 1,880. Claims to be the sunniest place in the UK!

Getting here: Gatwick Airport is less than an hour away by train, 70 minutes by car. 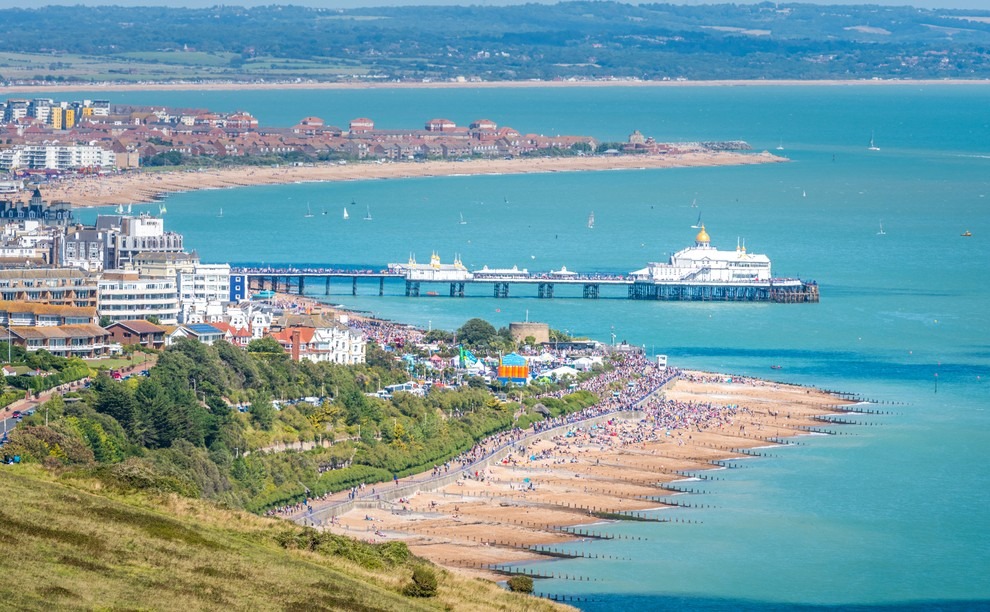 Good old Sussex by the Sea, as the song says.

Perched on the very edge of the North Norfolk coast is this once-famous Victorian seaside resort that today attracts people from far and wide to sample its tasty crab. But there’s much more to Cromer than just its delicious seafood fare. It has managed to maintain its traditional English seaside resort charms, with its colourful houses, sandy beaches and attractive pier – here you can still see the country’ only remaining traditional end of the pier variety show . It’s even home to Britain’s answer to the Great Barrier Reef: the Cromer Shoals Chalk Bed, which is a snorkelers dream.

Holiday home prices: You’ll be able to find a perfectly nice apartment from £150,000. For a rather splendid seaside villa or farmhouse, you’ll need at least £425,000.

Getting here: Cromer isn’t easy to reach (hence the lower prices). Stansted Airport is a two-hour drive at least. Although it has far fewer international flights, Norwich Airport is just 20 miles  away. 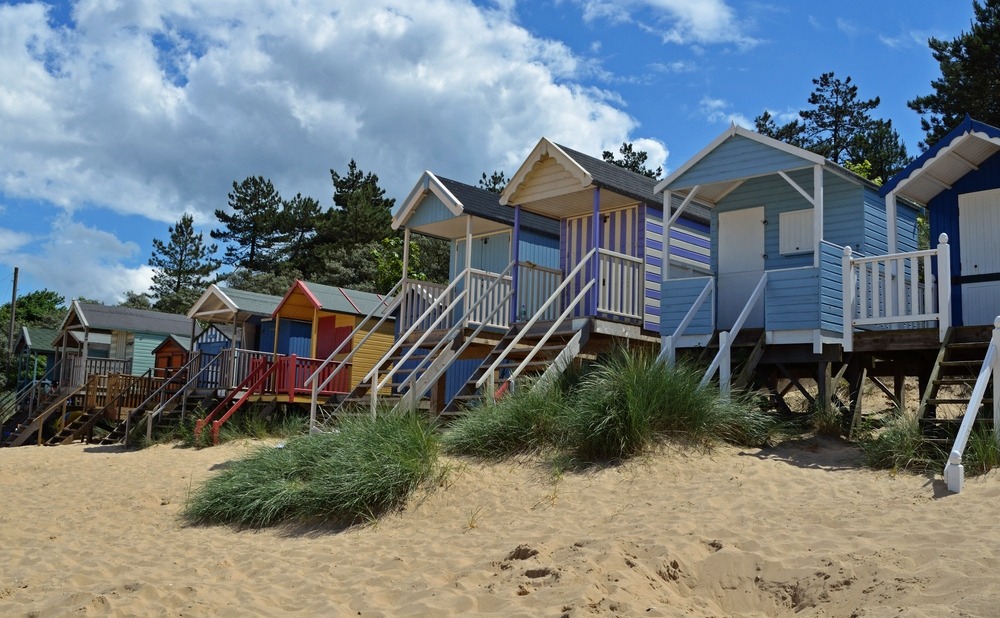 Beach huts on the sand near Cromer, Norfolk

Yorkshire proudly claims to be God’s own country. So for Beverley to be widely considered one of the most attractive towns in this large county, it must be doing something right. Forget Canterbury Cathedral, York Minster and Westminster Abbey, Beverley’s very own minster rivals them all. While handsome Georgian and Victorian buildings line its charming streets. Shopping is a must around here, whether you want to wander around the upmarket high street or browse the traditional Saturday market. And when friends come up to stay, why not treat them to a day at the races?

Holiday home prices: If you think because you’re up north everything will be cheap, think again. The best four-bedroom family houses with rental appeal still go for north of £500,000. Attractive apartments “in the best postcodes”, however, are generally well to the south of £200,000.

Getting here: Leeds-Bradford is your closest major airport, at around 90 minutes drive. Humberside Airport is much closer, but only has a few international flights. The drive from London takes around four hours, or an hour less by train. 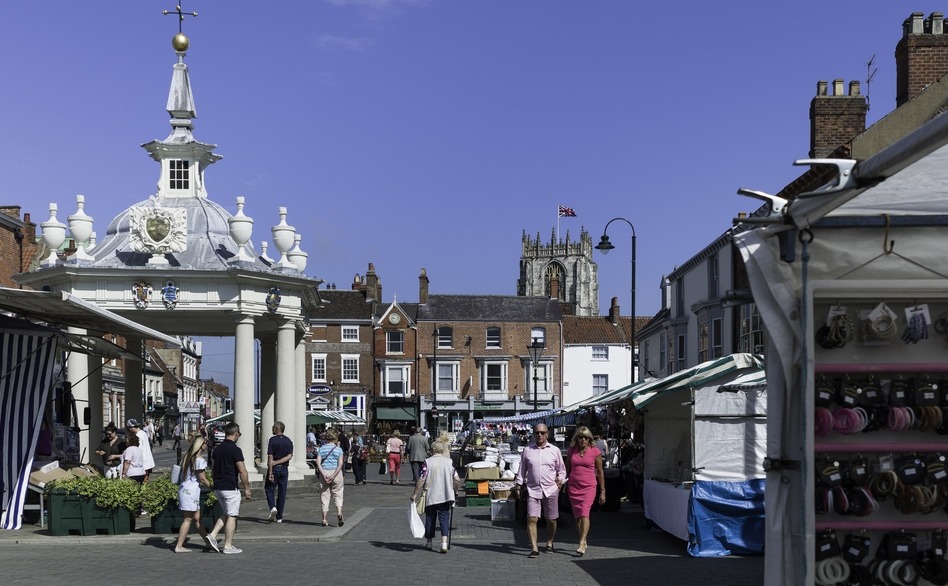 Located less than two hours south of London, the Isle of Wight is also known as the “Garden Isle” thanks to its impressive verdant countryside. It’s no wonder that half the island is officially considered an Area of Outstanding Natural Beauty. And with a large section of its 25-mile shoreline designated as heritage coast, it’s like stepping back in time to an untouched corner of England. But there’s more to the Isle of Wight than sandy beaches, bucolic appeal and dramatic white cliffs. There are plenty of pretty towns and villages to choose from across the island: Sandown, Shanklin and Ventnor in the south; Yarmouth, Freshwater and Totland in the west; Cowes and Ryde in the north; Bembridge, Seaview and St. Helens in the east; and Newport in the island’s heart.

Holiday home prices: For the best apartments with sea views, £300,000 should just about be enough, although you can easily double that for something new. The best detached houses, with gardens, and massive rental appeal, are around £700,000.

Getting here: Despite being an island, you can get fro central London to the Isle of Wight in little over three hours, including the 25 minute crossing. Southampton Airport is much closer (as is Gatwick), with transfers in around two hours. 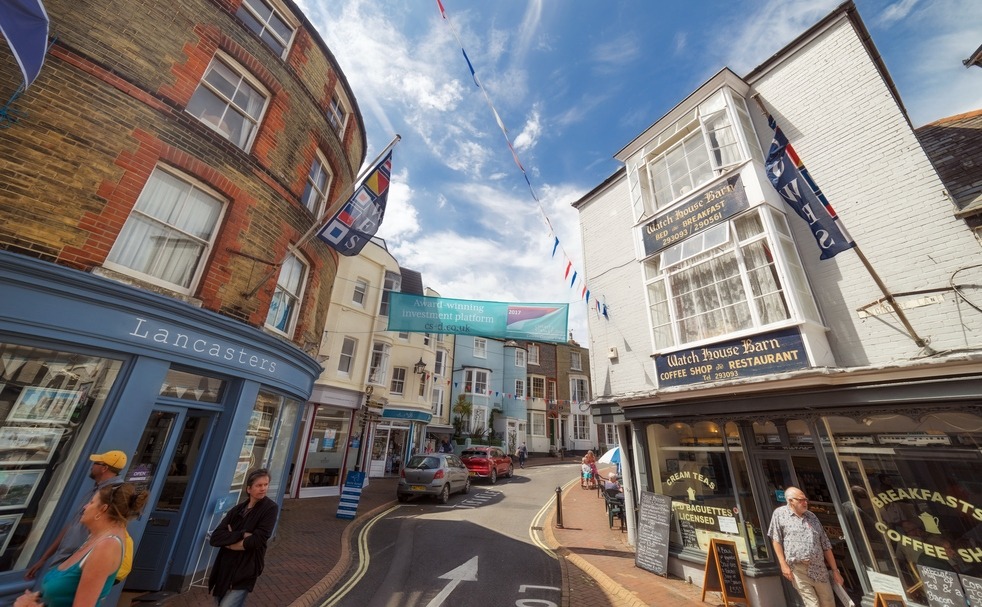