Malta is one of the most popular places in the world for British expats and retirees. Find out why.

Malta has been attracting British expats for many years now, and according to a recent study the flow of British migration is expected to strengthen after Brexit. This small island state is actually two main populated islands: Malta which is just 30 kilometres long and 15 wide, and Gozo which is around a third of that size. With a population of 450,000 it is the most densely populated country in Europe, yet it doesn’t feel that way. It has farms, rolling hills, an enviable climate, a predominantly English speaking culture and is one of the safest countries in the world. In an Internations survey, 14,300 expats were asked where they would like to live abroad, and British expats overwhelmingly indicated Malta as their first choice. One big fan is the Queen; she and Prince Philip spent their early married life there when he was serving in the Royal Navy. Find out why life in Malta is so good and how you can move to Malta as an expat or retiree.

One big fan is the Queen; she and Prince Philip spent their early married life there when he was serving in the Royal Navy.

Year after year, Malta is rated one of the most desirable places to live. With a stunning climate, close proximity to Europe, Africa and the Middle East and a lower cost of living than capital cities like London and Paris, there is little wonder why. Currently there are over 5,000 Britons who call Malta home and while a large majority of these are British pensioners, there is a growing trend of expats moving to Malta to work online. The cost of living in Malta is much lower than some capital cities of Europe. For example, the price per-square-metre of an apartment in Malta is around €2,400, compared to above €4,000 in Madrid and nearly €10,000 in Paris.

So all the talk is of buying overseas is finally over and you’re actually ready to head out to Malta for a viewing trip to find your dream home? Find out how to make the most of your visit by downloading our free guide to planning a viewing trip 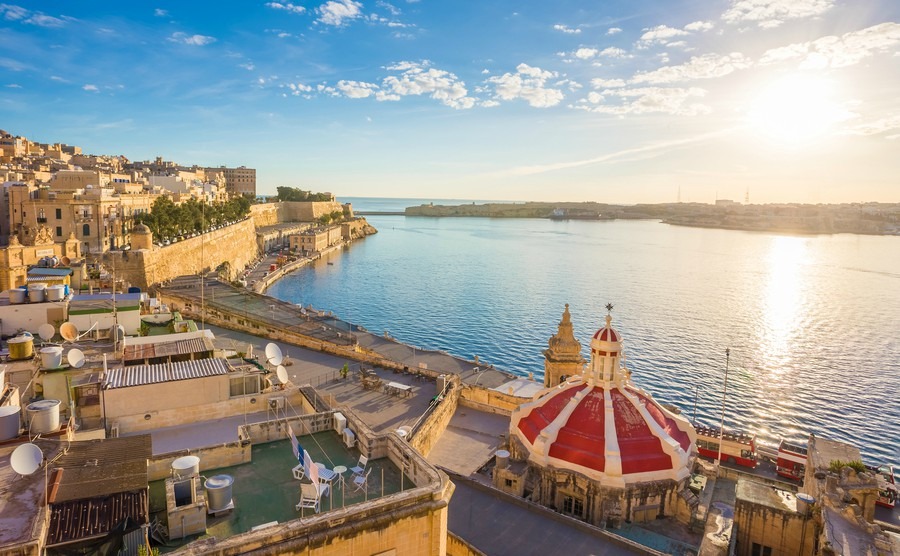 The Grand Harbour at Valletta, capital of Malta

As part of the European Union and Schengen economic zone, British passport holders are eligible to live and work in Malta – this could, however, change post-Brexit. Malta offers a Golden Visa (officially called the Individual Investor Program) which allows high-net worth individuals of any nationality to live in and obtain citizenship in Malta. This program requires an initial investment of €650,000 into a Government Development Fund, as well as a further €150,000 in a specified area, plus a real estate investment of €350,000 or a five year rental lease. You can also apply for a Residence permits if you wish to stay in Malta for more than three months and the Maltese government has a very accessible website.

Besides the great weather (Malta has twice as many hours of sunshine per year than the UK), Malta also offers a state-of-the-art medical system with reasonable insurance costs and a favourable taxation system for businesses. With one of the lowest crime rates in the world and a stable political and economic environment, Malta offers the stability and opportunity that many Britons seek.

The property market in Malta is in good shape; prices have been on the rise since 2015 and market growth is expected to continue. Considering how small the island is there is plenty to choose from for those looking to buy property in Malta, from new developments to established homes and apartments. Often rated as one of the top five places to retire in the world, many Britons choose to sell their property assets in the UK to seek a sunny retirement in Malta. Still close enough to friends and family, but in a Mediterranean climate where they can enjoy a relaxed and laid back lifestyle.