Out of 280 airlines, these are the Top Ten

Which airlines were rated the best in the skies in 2016 by nearly 20 million passengers?

Can you guess which airline ruled the skies in 2016? Nearly 20 million people from 104 different countries voted in Skytrax’s Best Airline in the World Survey. The survey assessed 41 criteria ranging from seat comfort to best lounges and quality of service to best first-class. If you are a frequent flier or are planning an upcoming trip here are the top ten airlines out of 280 carriers.

If you’ve never flown Emirates before, expect the sky’s largest selection of video and music on demand

Emigrates took the award as the number one airline in the world in 2016, this was the fourth time in 15 years it was awarded first place. Rating exceptionally well across all 41 parameters, Emirates was the leader of the pack for its state-of-the-art entertainment system. If you’ve never flown Emirates before, expect the sky’s largest selection of video and music on demand, with live television and sporting events streaming too. You’ll have no trouble passing the time on an Emirates flight. 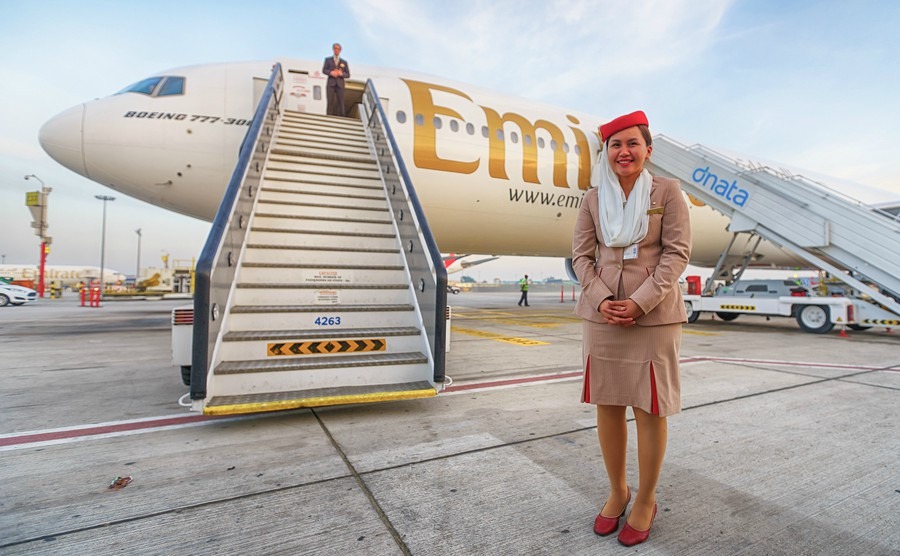 In second place this year was Qatar Airlines, a Doha-based airline that flies to over 125 destinations around the world. Qatar Airlines scored extremely well on its in-flight entertainment system and comfortable seats. According to survey respondents, Qatar Airlines had the best first and business class airline lounges. Great if you can afford to travel in style.

In third-place airline was Singapore Airlines, which stood out from the crowd when it came to customer service. The airline took home the award of best airline in Asia and the best business class airline seat. Singapore’s airport, Changi International, won the best airport in the world for the fourth year running.

Cathay Pacific came in 4th place this year, scoring points for having one of the biggest fleets in the world along with some of the best seat comfort, quality of service and cabin cleanliness. The top-notch customer service and quality in-flight entertainment also helped Cathay Pacific secure a top five finish.

The largest international airline in Japan, boasting one of the world’s largest fleets of Boeing 787 Dreamliners, received high ranking scores for service, cleanliness and safety. The flight crew on All Nippon were rated some of the best in the industry, and many passengers enjoyed the slide-forward-style reclining seats giving ample comfort and privacy.

Etihad Airlines, Abu Dhabi’s flagship carrier, came in 6th this year according to Skytrax. This luxurious airline is known for its residence flying apartments: tiny private first-class rooms where passengers can ‘feel like they’re at home’ while flying from one side of the world to the other. The airline also picked up top points for best first class seat and best first-class on-board catering.

EVA Air, which pioneered the ‘premium economy’ cabin, came in 8th place in 2016. Taking home the prize of the World’s Best Transpacific Airline, proves EVA Air has come a long way since its conception about twenty years ago. The Taiwanese Airline has a large fleet of Airbus and Boeing wide-body jets and is the preferred airline of many in the Asia and South Pacific Region.

Australia’s made it into the top 10 thanks to its five-star customer service and in-flight entertainment system. The airline has managed to keep its service offering strong despite financial setbacks over the last several years. Another one of Qantas’s strong points is its safety record: to date the airline has recorded zero fatalities.

Another one of Qantas’s strong points is its safety record, to date the airline has recorded zero fatalities.

Lufthansa received strong scores in all areas in 2016, taking the award for Best Transatlantic Airline and Best Airline in Western Europe. Its large fleet dominates the airspace in Europe and internationally, and despite significant budget cutbacks the airline still delivers consistent quality across the board.

So there you have it, the 10 best airlines in 2016 according to the Skytrax survey. When you book your next flight will you choose the airline with the best customer service, comfiest seats, best business class or perfect safety rating? If you’re looking to move abroad let the Overseas Guides Company help. We specialize in helping Britons move overseas, contact us today!