Buying a property near Disney World

Let’s be honest – most of us grew up dreaming of living near enough to DisneyWorld to wave at Mickey Mouse! Things haven’t changed, buying property near DisneyWorld remains one of the most popular choices with Brits. Even better, homes are surprisingly affordable around the “happiest place on earth”.

Disney World is located in Orlando, Florida – a year-round destination where we suspect it’s actually impossible to get bored. Here, every minute of your holiday can be about trips to theme parks, waterparks, zoos, shopping malls and of course golf courses… when the idea of another roller coaster makes you queasy. Fortunately, Orlando also enjoys a fantastic climate allowing you to get in some much-needed pool time all year round.

When you buy property near DisneyWorld, you can expect to make a nice return by letting it out while you are not in town.

Despite property prices increasing by 11.3% over the last year and Zillow predicting they will rise a further 7.3% in the coming year, the median price in the area remains a wonderfully affordable $228,000 (£173,000). When you buy property near Disney World, you can also expect to make a nice return on your investment by letting the property out while you are not in town. So long as you’re in an area zoned for rentals, that is. With 53,000 visitors each day to DisneyWorld alone, finding tourists who want to rent your Orlando property should, in theory, be simple.

DisneyWorld and its surroundings

Orlando is in Central Florida, around an hour’s drive from the east coast (for all you beach lovers). Orlando is also dubbed ‘The City Beautiful’, or if you are telling it like it is, ‘The Theme Park Capital of the World’. Walt DisneyWorld is of course the city’s most famous attraction. The resort’s area stretches a whopping 25,000 acres and boasts four theme parks – The Magic Kingdom, Epcot, Hollywood Studios and Disney’s Animal Kingdom.

As well as DisneyWorld, Orlando is also home to Universal Orlando Resort, where you’ll find Universal Studios, Islands of Adventure and Volcano Bay. Except for Disney, which is so enormous it needs its own corner of town, most of Orlando’s action is located along International Drive. Here you’ll also find the city’s version of the London Eye, only slightly smaller than its London equivalent. Nearby, you and the family can also enjoy something a little more sedate with a trip to Madame Tussauds or the Sealife Aquarium.

Even if theme parks don’t float your boat, there is plenty to see and do in the metropolitan city of Orlando. You can journey to Daytona Beach to experience NASCAR racing. Alternatively, you could journey into the Everglades and hire a boat at Lake Eola Park. Try a hike around the Tibet-Butler Nature Preserve. Orlando has a good range of excellent restaurants and bars – many of which are themed, which will delight the kids. 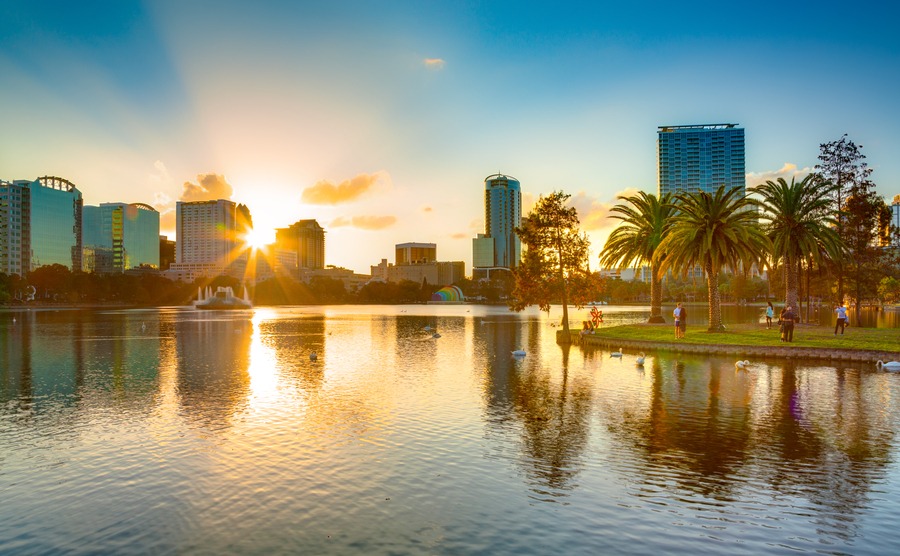 Those who prefer to get heir kicks more from shopping than courtesy of splashing the cash will enjoy the huge number of shopping centres and outlet malls in Orlando. The most popular being Orlando International Premium Outlets and Orlando Outlet Marketplace. Outlets are the place to be if you’re hunting for cheap Levis and sporting brands.

When you buy property near DisneyWorld you’ll experience two very distinct seasons. From May until September you can expect things to be hot, humid and steamy. As this time of year coincides with school holidays, it’s also the time when the area’s attractions are the busiest. We recommend visiting slightly out of season if at all possible.

If you want a beautiful home near Disney World, you’ll need all your negotiating skills. Read How to Negotiate Abroad for some insider tips, written by a licensed realtor.

During summer, temperatures typically range from 23-36°C. Thunderstorms regularly roll in during the afternoon bringing heavy rain and spectacular lightning storms. From October to April the weather is warm and dry and decidedly less humid. The average temperature throughout the cooler months is very pleasant 15.7°C. Just right for a game of golf if you ask us. 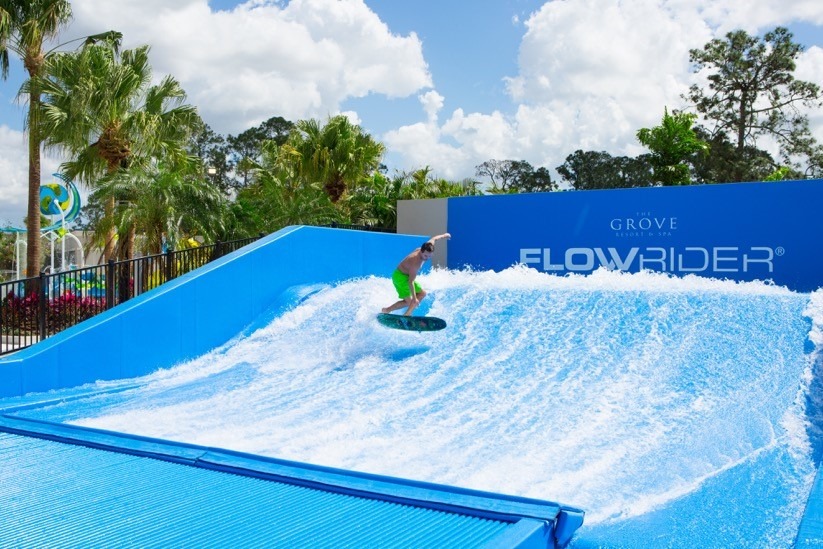 Surfing, sort of, at the Grove Resort, Orlando

Due to the state’s location, the area around Disney World is susceptible to some extreme weather conditions. Hurricanes are not as common as they are in southern parts of the state but have been known to hit the region. When you buy any property in Florida do ensure that it is hurricane-proof. Also ask what steps you should take to weather-proof your home before hopping on a plane back to the UK.

If you wish to buy property near Disney World to use as a permanent residence, chances are you’ll need to seek employment. Obviously, the tourist industry is an enormous money spinner. Indeed the entertainment industry in general is big in this corner of the country, aided by the likes of Universal Studios and Disney’s Hollywood Studios. But the city is also a major industrial centre, recognised for its innovation. Opportunities are available in aviation, software design, digital media, engineering, aerospace and IT. In fact, more than 150 international corporations now have premises in downtown Orlando.

Orlando is a major industrial centre recognised for its innovation.

You’ll also be able to source work in the health sector, in education, and within the housing– perhaps helping fellow expats to finally realise their dream to buy property near Disney World.

Another big business in Orlando is the convention industry. In fact, Orlando competes with Las Vegas and Chicago as the convention capital of the US. The Orange County Convention Centre is one of the city’s major employers.

While many expats opt to be as close to Disney as possible, if you’re looking for somewhere quieter, the following suburbs are great choices:

For a central location close to downtown Orlando and half an hour from Disney, consider Orwin Manor. The median home value in the suburb is $340,853 (£259,000). This is a family-friendly spot with some excellent restaurants all within a small radius.

In this hugely popular suburb you’re looking at an average property price of $340,400 (£258,500). In Winter Park, which is half an hour from Disney World, you’ll be able to enjoy Leu Botanical Gardens, great schools and a good selection of nightlife and shops

This is another family-orientated corner of Orlando with a distinctly small-town vibe. Currently, the median property price is hovering around the $280,600 (£213,000) mark. This popular area is on the up, so could be a fantastic choice for an investment property.

For an average property price of $241,100 (£183,000) you can live in a culturally-diverse location, popular with families for being safe, affordable and close to several excellent schools. DisneyWorld is a 45-minute drive. Most of the properties located here are either large single-family homes or smaller properties perfect for renting out to long-term tenants.

So, convinced? But where shoud you buy? Here a couple of local property developments to whet your appetite. Just click on the image to see more details. 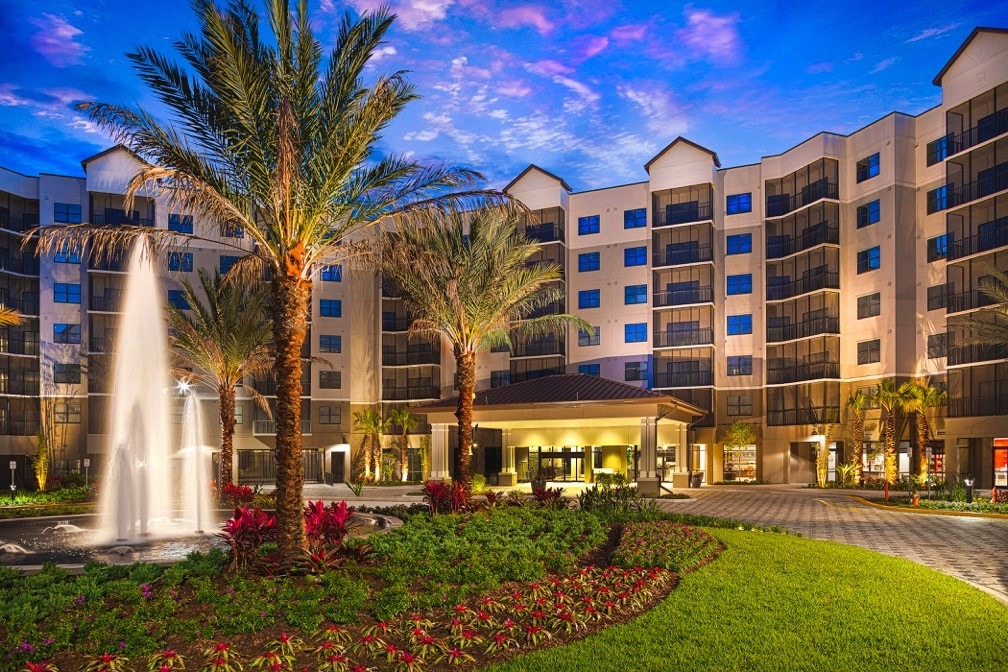 Those of you wanting somewhere only minutes from Disney might opt to buy within a resort like The Grove Resort and Spa Orlando. On-site you will enjoy facilities like a surf simulator, a lazy river, 24-hour security and a luxury spa and fitness centre. There are a range of two- and three-bedroom properties starting from around $300,000 (£228,000). The location and amenities make these prime short-rental opportunities, with the resort working with the hospitality company Benchmark Resort & Hotels. 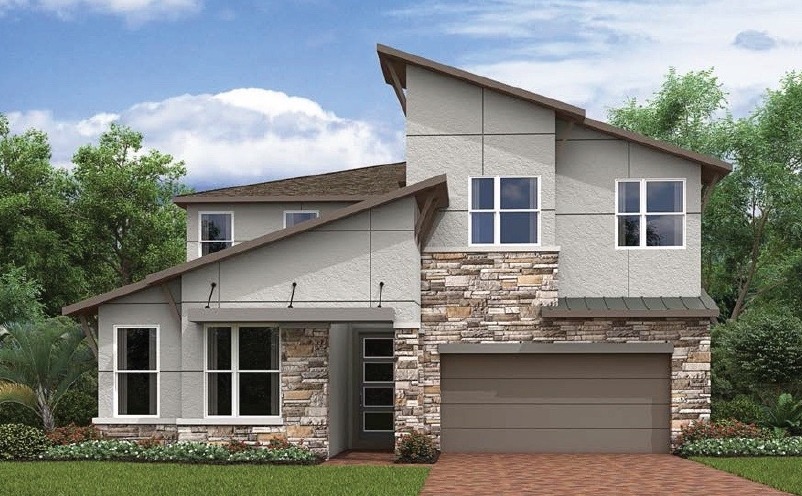 Every home at Solara Resort comes with a private pool and outdoor space. When you come to venture out, however, you’ll find plenty of sociable outdoor spaces too, to meet other people and take part in exciting (or intensely relaxing!) experiences. There are pools, a surf simulator, restaurant, bars and ice-cream parlour and coffee shop, and much more.

The properties – town homes and villas – offer a range of styles and floorplans, ranging from nearly 2,000 square foot to more than 4,300, and from three to nine bedrooms. Take a look at Solara Resort here.

For a detailed explanation of how you can protect your protect budget from currency risk, read the Property Buyer’s Guide to Currency. It is written by our currency partner Smart Currency Exchange, rated “Excellent” on Trustpilot.