Where are the best places to live in New Zealand’s South Island?

New Zealand’s South Island is known the world over for its incredible beauty, from snowy mountains and glaciers, to tropical peninsulas and lakes so blue you won’t believe your eyes. Basing yourself here means a relaxed pace of life, outdoor adventures, a decent climate and – in some places – affordable living. So, what viable options does the South Island have for people looking to move to New Zealand?

Our comprehensive Healthcare Guide covers everything you need to know about accessing medical attention abroad – download your copy today.

If it’s city living you’re in the market for when you move to New Zealand, the largest and most diverse city on New Zealand’s South Island is Christchurch. This is considered the ‘most English’ city in the country due to its climate, friendly people, and the fact that it’s more similar to a small town than a city. For example, it’s possible to check off all your errands in one day, and the low population means you actually get the chance to know people! Despite suffering the country’s second-worst natural disaster in 2012, the city’s residents are united and have coped with the damage in incredibly creative ways. 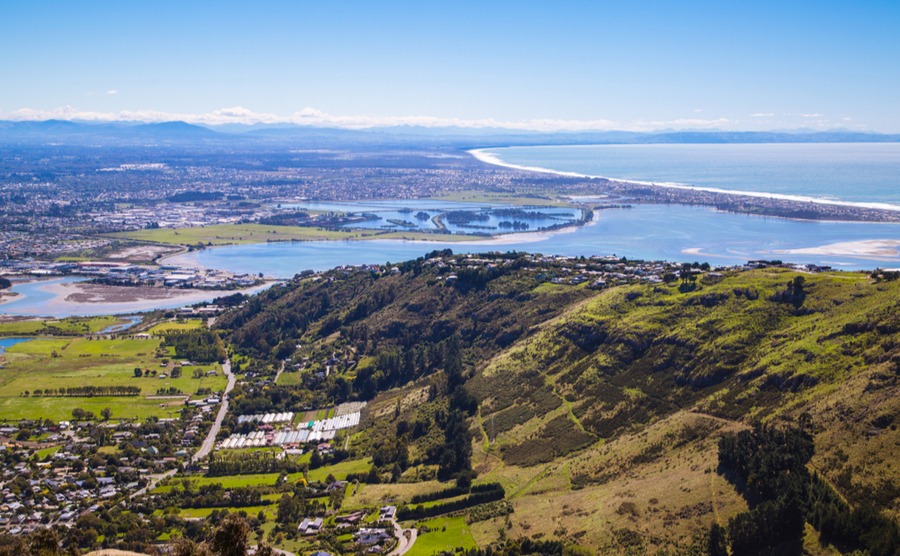 Christchurch is one of the best laces to live in the South Island.

The Port Hills surrounding Christchurch are the perfect adventure playground for anyone who enjoys hiking, running, cycling, or a good old scenic drive. Also, Hagley Park boasts 140 hectares of perfect picnicking spots. Additionally, Christchurch is one of the only places in the country where you can surf and ski in one day. Taylor’s Mistake beach and Mount Hutt are less than two hours’ drive from each other. Furthermore, Christchurch International Airport – the main gateway to the South Island and to other countries – is just 12km outside of town.

Employment: The average household income in Christchurch is $89,985 (£48,923), and the average salary per month (after tax) is NZ$3,748 (£2,037). Due to the earthquakes of 2012, a huge rebuilding effort is underway in the city, meaning there are plenty of construction jobs up for grabs. Also, education and manufacturing are the major industries.

Climate: Christchurch’s climate is sunny and dry but can be a touch windy. Summer (November-April) is warm (20-25 degrees), and May to Oct is cooler (10-12 degrees). The city enjoys 2144 hours of sunshine per year, which means plenty of sunny days. The wind is a steady fixture of Christchurch’s climate.

Perks: If you’re a coffee fanatic, Christchurch should be top choice when you move to New Zealand. This is a city that takes its coffee seriously, from coffee cup holders in supermarket trolleys to drive-through cafés. Additionally, there is a great street food scene, and lots of innovative pop-up bars and restaurants housed in shipping containers or double-decker buses.

Basing yourself in the ‘adventure capital of the world’ means more than just bungy jumping and sky diving. If you select Queenstown in the Otago region when you move to New Zealand you’ll be treated to lakeside alpine living, gorgeous surrounding countryside, a cosmopolitan arts and dining scene, plus there are a fair few top-notch wineries just outside of town. From Queenstown it’s easy to enjoy day trips to some of the South Island’s biggest highlights, including Lake Wanaka, Milford Sound, Mount Aspiring National Park and Glenorchy for the Routeburn trek. 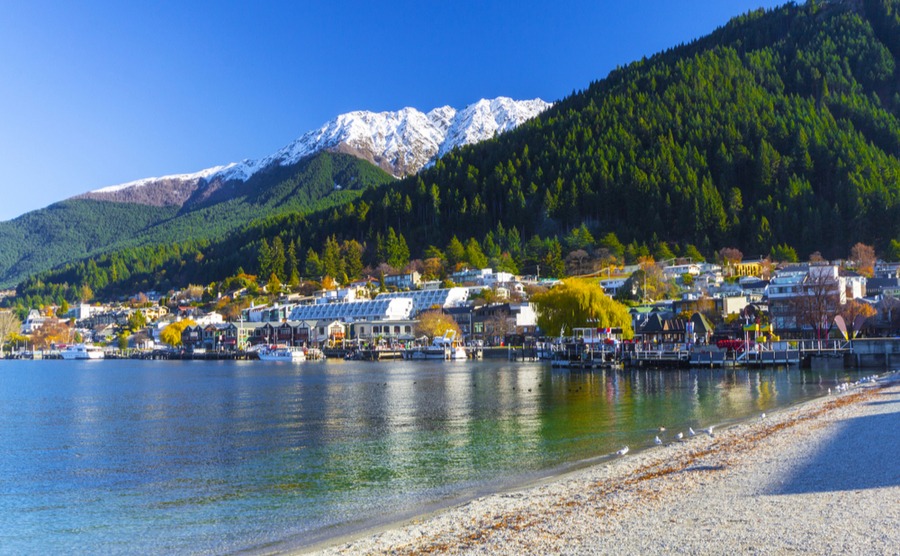 Queenstown bills itself as the ‘Adventure Capital of the World’!

Brush up your bargaining skills and get the best house for your money by reading our free Negotiating Guide.

Employment: In Queenstown, the median household income is $73,154 (£39,800) and the average monthly salary $3,300 (£1,795). The majority of job opportunities can be found in tourism, agriculture, sustainable energy or wine and viticulture. Also, Central Otago has a thriving film industry due to its breathtaking scenery.

Climate: Queenstown receives 1930 sunshine hours per annum. Summer temperatures sit between 20-25 degrees, and during winter the mercury tends to hover around 10 degrees.

Perks: Living so close to the mountains and the water means there are an array of outdoor activity options for you to enjoy. Four ski areas surround the town or you can try your hand at something more adrenaline-fuelled – jet boating, paragliding or heliskiing. For something more sedate there are world-class golf courses, kayaking and sailing opportunities, plus plenty of shops and spas to unwind in. Also, Queenstown has its very own international airport making it simple to travel abroad or to hop around New Zealand.

Nelson is located in the Marlborough region in the very north of the South Island and is one of the sunniest spots in the country. This highly liveable city is known for its art and culinary scene (particularly if you’re in the market for seafood or sensational wine), plus Abel Tasman and Kahurangi National Park are right on its doorstep. Also, there are lots of lovely towns close by to explore, including Mapua and Kaslo, which is best known for its jazz festival. Fans of Lord of the Rings will enjoy having many of the film’s major locations, including Hobbiton, just down the road. 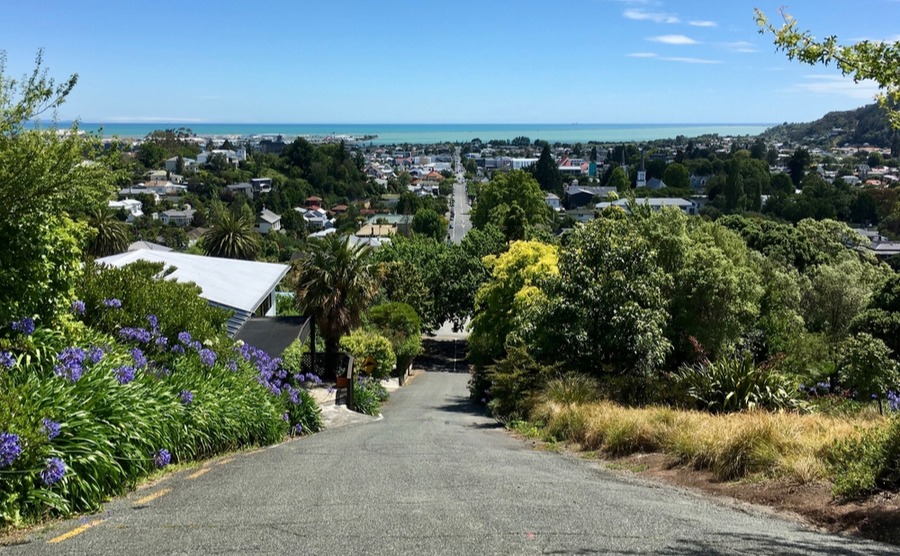 Nelson is one of the sunniest spots in New Zealand!

Property prices: The median cost of Nelson property is currently $547,000.

Employment: The median household income here is $82,878 and the average monthly salary stands at $4,300. Major industries in this corner of the South Island include wine and viticulture, agriculture and horticulture.

Climate: Summer temperatures fall between 20-25 degrees and during winter, the temperature drops to around 14-15 degrees. Nelson is one of the sunniest corners of the country, with more than 2477 sunshine hours per year.

Perks: In addition to having the world’s best wine, basing yourself in Nelson means easy access to the North Island. There are around seven ferries a day transferring people between the North and South Island from Picton, which is two hours away from Nelson.

For a small city, Dunedin offers a lot of perks to those looking to move to New Zealand. One of its highlights is its beautiful coastline, made up of peaceful bays and great swimming and surfing spots. Additionally, it is the ‘wildlife capital of New Zealand’, so keep your eyes peeled for penguins and sea lions. Dunedin attracts international sport and music events, is a gateway to the Central Otago region, and has been well designed to incorporate plenty of green spaces around the city, which means there are plenty of opportunities to get outside and get active. The Otago Peninsula is a particularly beautiful location for a hike or for some wildlife spotting – fur seals, albatross, and a huge bird population like this corner of the South Island. 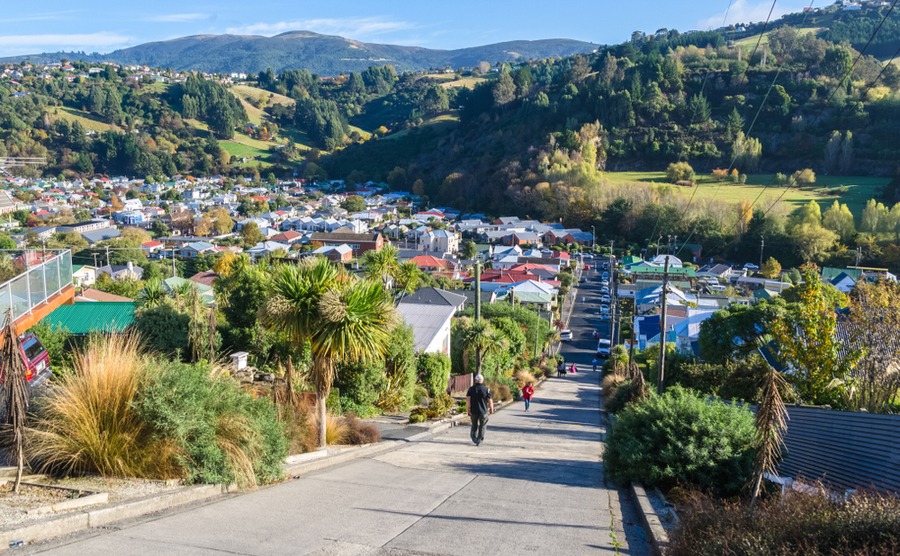 Dunedin is perfect for anyone looking to take up a new hobby when they move!

Population: Dunedin has a population of 128,800. It is commonly referred to as ‘New Zealand’s coolest little city.’

Property prices: Currently, the median house price in Dunedin is $438,000.

Employment: The median household income of those living in Dunedin clocks in at $78,837. The average monthly salary is $3,344. Dunedin has a diverse economy and opportunities can be found within education, publishing, tech, tourism and research.

Climate: Dunedin receives 1680 sunshine hours per annum. If you prefer things to err on the cooler side, this could be just the city for you. Temperatures rarely go above 20 degrees during summer, and winters are mild.

Perks: Residents of Dunedin are some of the least stressed in the country, and perhaps that has to do with the fact that cost of living here is much lower than New Zealand’s other cities. Also, the city’s education and research sector are thriving, and the schools and university in the city are fantastic.

Finally, down in the bottom corner of the Southland region is Invercargill, one of the world’s most southerly cities. Here you will enjoy a small-town vibe and a wealth of space. In fact, the city’s population of just 50,000 is spread out across 389 square kilometres – which is larger than Wellington! Also, Invercargill is surrounded by rugged wilderness, whether that’s outside its borders or in its incredible parks, Queens Park and Anderson Park. Invercargill has a domestic airport in town, but Queenstown is the closest international airport, which is a 2.5-hour drive. Invercargill’s major, Tim Shadbolt – who is somewhat of a local celebrity – says of the city; ‘Invercargill is a great city to raise a family, with affordable housing, excellent schools and zero fee tertiary education. We also have brilliant infrastructure, a new airport, a state-of-the-art water purification plan, brilliant sporting facilities and a fully-restored 1,000 seat theatre for the arts.’

Invercargill has a friendly, small-town vibe.

Property prices: The median house price in Invercargill is currently, $281,000.

Employment: The average monthly salary works out as $2,527. Also, median household income is $81,019. The Southland region boasts a strong economy due to its abundance of natural resources. Agriculture is a major industry as are tourism, energy, forestry and manufacturing.

Climate: Invercargill receives around 1,600 hours of sunshine per year, which means you get sunshine even during the winter when temperatures fall to around 10 degrees. During summer, the average temperature is 20 degrees and it stays light until after 10pm. Do bear in mind this is a fairly rainy corner of the country, so factor that in when planning your move to New Zealand.

Perks: Being located here means you’re close to some of the country’s most sensational natural highlights including Fiordland, Stewart Island and the Catlins Ranges.