What does it cost to buy a piece of the gorgeous Italian sunshine and lifestyle? Surprisingly little if you head down to Puglia

The price of homes in Italy has remained stable so far this year, although there have been very slight drops (of one percent or so) in places. So if you are looking to buy, now is as good a time as any. Rural properties in particular are continuing to be offered at lower prices than in the last property boom. You can still pick up a farmhouse with land from around €35,000 in the attractive southern region of Puglia.

Helen Mirren and Amanda Lamb own homes here, tempted by southern heat but good access all year from British airports

It is an area where many British people – including Helen Mirren and Amanda Lamb – own homes, tempted by a combination of southern heat but with good access all year from British airports (or by car or train if you have the time). Country properties divide into trulli, which are smaller conical-shaped homes, and larger farmhouses called masseria. 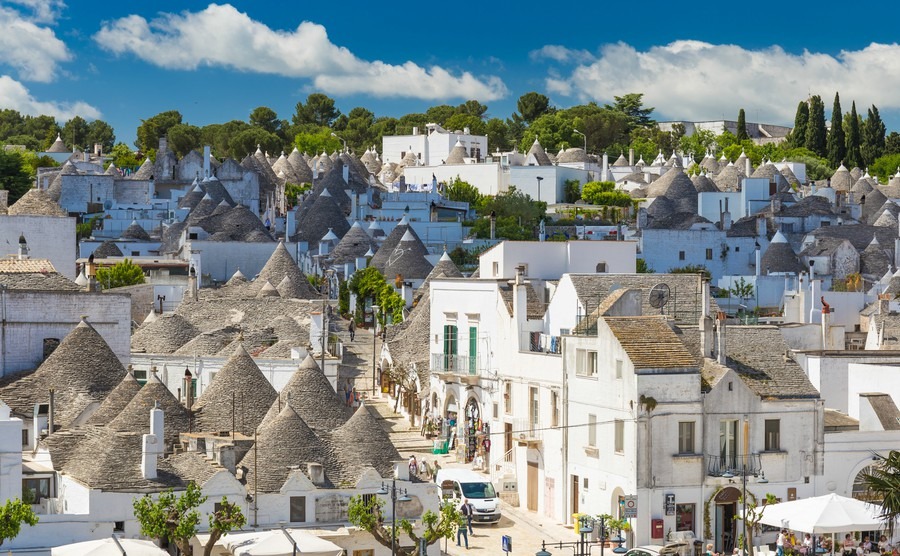 The town of Alberobello in Puglia

There were trulli in the Itria valley as far back as the prehistoric age, but the oldest we know of today date back to the 14th century. The most important settlement was at Alberobello an inland town in central Puglia, which now has Unesco World Heritage status.

During the 14th century the land was given to the Count of Conversano as a thank you for serving in the Crusades. People were taken from other settlements to repopulate the area and the new settlers built trulli without mortar as a way to evade taxes. The dry wall construction enabled them to be dismantled should a tax collector turn up from the Kingdom of Naples. There was a lot of limestone in the area, so this was chipped into the required shapes to form the walls and conical shaped rooves of the trulli.

Settlers built without mortar as a way to evade taxes.

By the end of the 18th Century the population of Alberobello had grown to 3,500 and received the title of Royal City from the King of Naples, Ferdinand IV de Bourbon. The Monti district now has 1,030 trulli and a network of tiny streets leading to the Church of Sant’Antonio and Trullo Sovrano, which serves as a museum.

Trulli were also used in the countryside around Locorotondo, Fasano, Ostuni, Cisternino, Martina Franca and Ceglie Messapica, as homes, shepherd shelters and storage for farming tools. The word originated from a Greek word meaning cupola and was originally spoken as ‘truddu’.

When the trulli were built they dug cisterns to store water. The stone that was dug out was used in the construction of the buildings. On top of the conical roof a pinnacle was placed, which was hand carved by the stone mason as his trademark. Religious or mystical symbols were also painted on the roofs.

There was a single small door, and the cool and dark makes them good summer holiday homes today. A house would sometimes include a few trulli grouped together with a room under each cone and additional space in arched alcoves, where children would sleep behind curtains. The internal walls were rendered with lime plaster and white washed.

Between the 16th and 18th century the central areas of Puglia, particularly between Taranto, Bari, Brindisi and Lecce, witnessed an increase in colonization. Large farms were created with farm buildings to house the workers, equipment and animals. Buildings are generally on two sides of a large courtyard, with the only two storey section being used for accommodation. Around the courtyard they built a high stone wall to protect them from thieving invaders hence the name masseria which means “a fortified farm house”. The only external entrance was the large courtyard gate, big enough to allow access for a horse and cart. All other doorways opened onto the courtyard.

The buildings were built using the local sand stone, known locally as “tufi”.

Often large masserie also had a chapel, a cantina (cellar), wine and olive presses and facilities for threshing, grinding and storing grain. Like the trulli there was a cistern which could collect rain water from the roof. The buildings were built using the local sandstone, known locally as “tufi”. This is a great material to work with as it easily cuts into large blocks for building, allowing builders to construct barrelled and star-vaulted ceilings. Over the years many have been covered in layers of white wash, but it is worth chipping it off to expose the sandstone underneath, which will look like new.

Some masserie continue to be used as farm buildings today, while others have been left empty. Some of them are in the hands of the state, due to the owners dying without heirs. In the past 30 years, people have been buying these rundown masserie to use as private homes, holiday rentals, wedding reception venues, spas, restaurants and hotels. Many need a great deal of updating and renovation, but the results can be spectacular. Many of them are large enough to need a significant investment, but make ideal B&Bs. Prices vary greatly from a few hundred thousand to millions, depending on the location, condition, building size and size of plot.