You don’t need us to tell you that Italian cuisine is amongst some of the very best in the whole world. In fact, we wouldn’t be surprised if it was half the reason you wanted to make the move in the first place!

For those of you who are less clued up on the deliciousness of all Italian food, here’s a rundown of all you need to know…

Pasta is a huge part of the Italian diet, wherever you’re located in the country. If you’re used to dishes like Spaghetti Bolognese, you may be surprised to find you can’t find this outside of the major tourist hotspots. Italians are very particular about their pasta dishes – some sauces just aren’t meant to be paired with certain pastas! Fear not, you can learn this as you go along. The pizza in Italy is beyond incredible, and very affordable. You may find you struggle not to want to order it for every meal!

If you’re used to dishes like Spaghetti Bolognese, you may be surprised to find you can’t find this outside of the major tourist hotspots.

Less carbohydrate-heavy options that you’ll find on menus across the country include all types of fish and seafood, game, and fresh vegetables – although these are often cooked within dishes rather than being served on the side as us Brits are more accustomed to. You’ll also find that offal is a popular choice.

Breakfast isn’t considered a particularly important meal in Italy. In fact, Italians tend to just graze on some bread and jam, brioche or a couple of biscuits (fette biscottate) served with a cup of coffee to keep that hunger at bay. Cappuccino is a breakfast coffee, and it’s rare to find an Italian that drinks it after 11am. 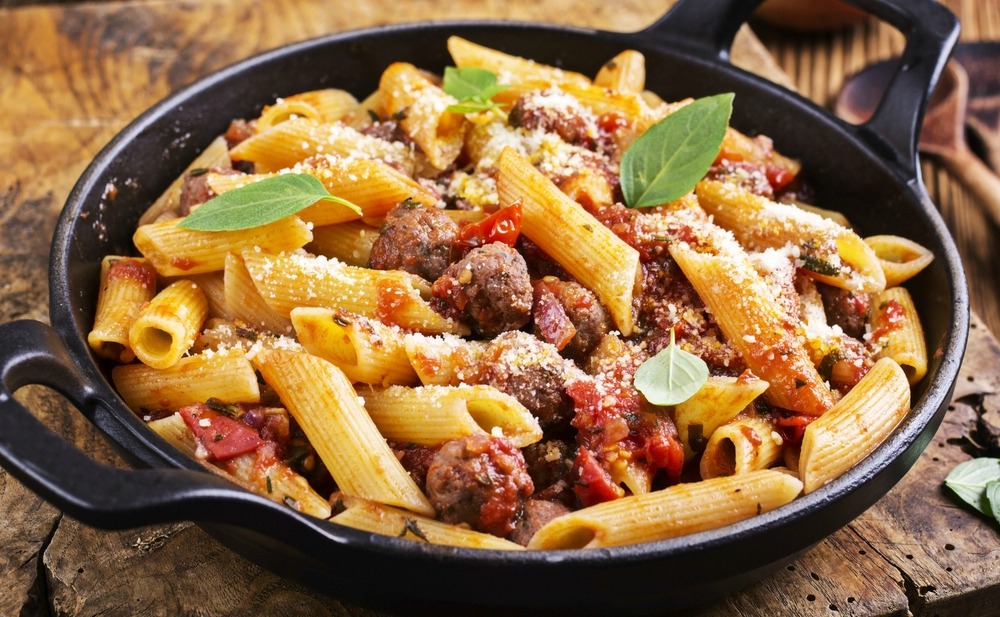 Lunch, the main meal of the day, is usually eaten between midday and 2pm in the north, and between 1.30pm and 2.30pm in the south. Lunch traditionally consists of antipasti for starter (salami and ham), followed by a pasta or risotto dish. Then, there is a second course consisting of meat or fish served with salad or a few vegetables. It’s not uncommon to follow the second course with a dessert of cake or ice cream, before finishing off with the customary espresso. Obviously, this is a huge meal, so you’ll find that during the week most Italians usually only have a first course, or a second course rather than both. If in a rush, Panini’s filled with things like mozzarella, prosciutto, and tomatoes are common.

Dinner consists of a lighter meal, usually a salad or a typical first or second course, rather than both. Heading out for a pizza is obviously a popular choice too!

Tap water is generally safe to drink in Italy, although you may find that it takes a little while to get used to the taste!

Lunch, the main meal of the day, is usually eaten between midday and 2pm in the north, and between 1.30pm and 2.30pm in the south.

Coffee is a staple of any self-respecting Italian’s life! The usual brew of choice is espresso, which you’ll find is far superior to the same product in the UK. It’s not uncommon for Italians to drink several in one day, usually after breakfast, lunch and dinner. Caffe corretto, a typical coffee laced with booze, usually grappa, cognac, or Sambuca, is popular so don’t be shocked if you see Italian’s indulging in this in the morning!

Italians like to enjoy an aperitif in the early evening, prior to dinner. Usually this is wine, a beer, a liqueur or a cocktail, like a Campari, or Negroni. These aperitifs are real social occasions, that can stretch from one or two drinks, into a big session accompanied by lots of different snacks ranging from nuts, pickles and bread, to cold meats, and full on risottos.

As you know, Italian wines are some of the best in the world, and they vary from region to region…what a wonderful thing to have to familiarise yourself with!

After dinner, Italians tend to enjoy a liqueur to aid their digestion. Without a doubt the most popular drink in the south is limoncello, while nocino is more popular in the north.

Service in Italy usually ranges from between 1 to 3 euros depending on the restaurant you’re in. This should be automatically added to the bill, and clearly outlined on the menu. It’s usual practice to round up the bill by a few euros.