Your guide to the north-east Cyclades

From the trendy swagger of Mykonos, the stunning beauty of Santorini, the calm of Syros, the rugged landscape of Naxos and the charms of Paros, we’re uncovering the appeal of the islands that make up the north-east Cyclades.

In a bid to upstage Spain’s Ibiza, Mykonos in the Cyclades has become one of Europe’s trendiest summer destinations, where superyachts line up to offload the world’s jet set into swanky beachfront bars and boutique shops. Wondering what all the fuss is about? Here are some key facts. 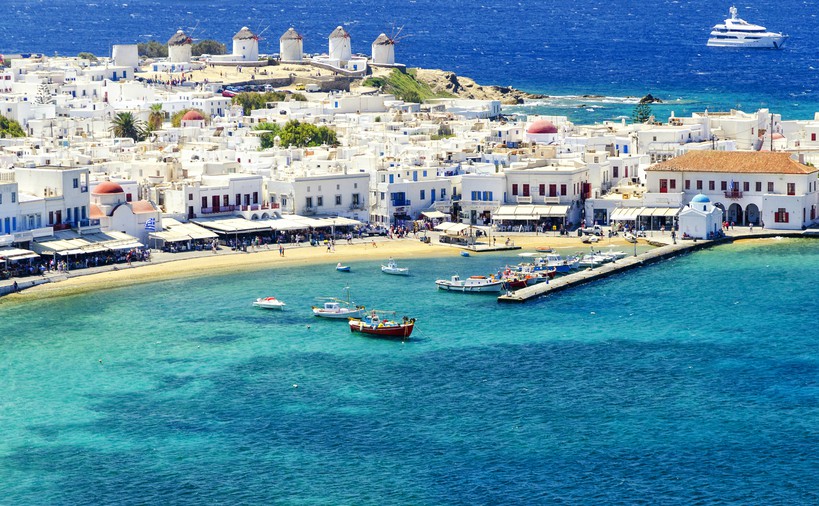 Jackie Onassis, Brigitte Bardot, Sophia Loren and Grace Kelly first put the island on the radar of the world’s A-listers, when the four dazzling icons began frequenting its beaches and night spots in the 1960s. The likes of Richard Burton, Marlon Brando and Liz Taylor soon followed.

Last summer, the range of celebs there included actress and singer Lindsay Lohan – a regular to the island – Olympic champ Usain Bolt and supermodel Bella Hadid. Mykonos’s picture-postcard towns, glorious beaches and clear, blue skies made it a popular place for fashion shoots, which helped build its popularity amongst the global fashion elite.

The west coast of Mykonos is where all the action happens.

The island is home to Europe’s largest beachfront swimming pool, which opened in July last year. Covering 22,600 square feet and brimming with sparkling Mediterranean water, this mega pool is located within the trendy new SantAnna Beach Club, next to Paraga Beach. Other facilities there include a gym, salon, spa, bars, organic restaurants and boutiques. The pool has floating “VIP islands” for hire and is surrounded by a 28,000-square-foot terrace. Enough loungers for everyone!

The west coast is where all the action happens. Here you’ll find the most desirable areas to own a home, including Mykonos Town, also known as Chora, with its ancient harbour and picturesque ‘Little Venice’ quarter. Other hotspots on this coastline include Agios Lazaros, Agia Sofia, Tourlos and Houlakia. Set back a bit from the jetsetters, gay-friendly Elia has the island’s longest beach. Platis Gialos is one of the oldest resorts on the island and a more laid-back option.

Mykonos is not cheap. For a small detached villa outside of the more fashionable areas and with no pool, don’t expect a lot of choice for under €500,000. Your options (for a villa) increase significantly with a budget of €1million-plus.

When you come to buy, it’s a simple fact that many local people, understandably, will see international buyers as rich and bump up the price accordingly. To get a fair price, you’re going to need all your negotiating skills. Read our guide, How to Negotiate Abroad.

The seven iconic white windmills that overlook the harbour at Mykonos Town hint at the fact that the island is rarely without a breeze – designer sarongs dry especially fast there. In total the island has 16 windmills, which used to grind the grain of passing ships and were important for the local economy. These days they serve either as a tourist attraction or, in some cases, a quirky home.

Mykonos achieves one of the highest yields from holiday lets of all the Cyclades islands, according to local agents. The most desirable multi-million-euro villas can achieve between €10,000 and €30,000 a week in high season. Paros and Santorini are the next best earners. 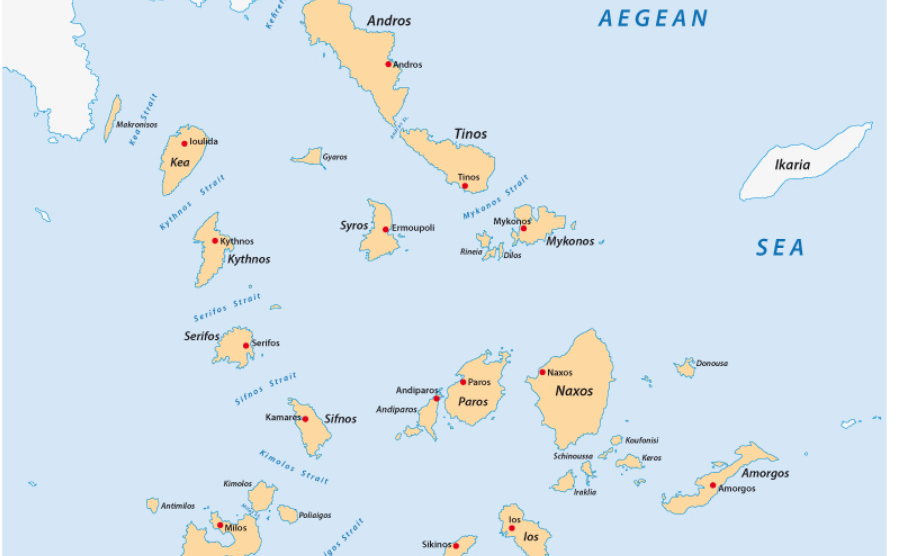 Paros sits at the opposite end of the scale to Mykonos when it comes to tourist crowds and hype. This sedate atmosphere has helped the island to preserve its traditional spirit in a way others have not. While the landscape isn’t as dramatic as somewhere like Naxos, it certainly doesn’t come up short in terms of whitewashed villages, blue-domed churches, golden sand beaches and fishing harbours. Head to villages like Naoussa and Lefkes and the beaches on the south-eastern side of the island to find out for yourself. Parikia is the capital and main port of Paros, with its pretty old town, ferry port and convenient access to some of the island’s best beaches.

The unrivalled Byzantine footpaths connecting traditional villages and the breathtaking landscape they cross, make walking a popular mode of transport around here. If you fancy trying something that will get your heart pumping a little faster, there are plenty of opportunities to go windsurfing, kite-surfing and diving. 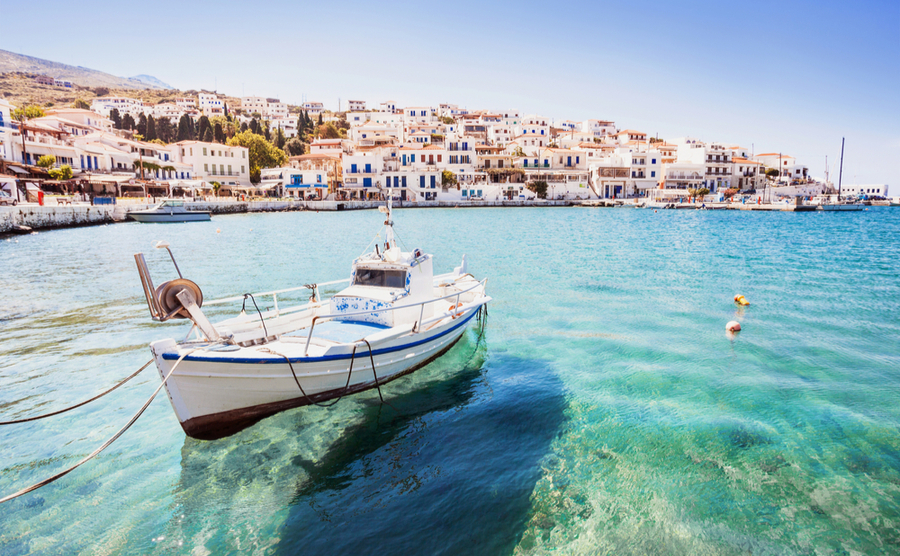 Sitting on the dock of the bay, in Batsi village, Andros

The second-largest island of the Cyclades and the northernmost of the group, Andros has a rugged landscape, with wild mountains, rushing rivers, waterfalls, untouched beaches and ancient stone mills. Its close proximity to Athens – it’s just a two hours ferry ride from Rafina – makes it a popular choice with property buyers who need convenient access to the mainland.

The island’s capital Hora owes its grand mansions, neoclassical houses and squares to Venetian settlement and its rich seafaring history. Built on a narrow peninsular stretching out from the shore that is tipped by the remains of a Venetian fortress, the town has an impressive artistic pedigree. Its Museum of Contemporary Art, combined with an array of artists’ studios and small galleries, ensure it’s bursting with culture. Other popular villages to consider on your viewing trip include Batsi, Gaviro, Menites, Ormos, Stenies and Mesathouri.

Beach lovers should take their towel and parasol and head to the western side of the island, where they can spend lazy days on beaches such as Agios Petros, Batsi and Golden Sand (Chrissi Ammos). If you fancy something a bit more energetic, Ormos on the eastern side is popular with windsurfers and other water sports enthusiasts.

Despite being one of the smallest islands of the Cyclades, its status as the legal and administrative centre of the entire archipelago means Syros has a surprisingly large population. It serves as a transportation hub for the northern islands via the ferry port in the capital Ermoupoli. This gem of a Cycladic town owes its name to Hermes, the god of trade. Its illustrious past – it was Greece’s main port once upon a time – is perfectly demonstrated by its historic mansions, marble paved streets and squares, imposing churches, monuments, statues and well preserved neoclassical buildings.

Syros is the legal and administrative centre of the entire archipelago.

While Ermoupoli is a hive of energy without being overrun by tourists, the rural villages dotted throughout the rest of the island are small and quaint. A fine example is Ano Syros with its distinctive mix of Venetian and the Cycladic architecture.

Improvements to the British diet in recent decades can be traced back to Syros. A young woman from deepest Sussex who came to live here in in the 1940s was Elizabeth David. She is credited with bringing the tastes of the Mediterranean to the British palate.

If this has inspired you to buy in Greece, you’ll have a few financial matters to sort out. For advice on getting the best currency deal download the Property Buyer’s Guide to Currency.

Tinos is an island of great religious significance. Twice a year – on 25 March and 15 August – Greek pilgrims visit the church of Panagia Megalochari (the Blessed Virgin Mary) in Tinos Town, in the belief that it protects the entire country. Overseas travellers make a pilgrimage of their own to sample the beautiful beaches, crystal-clear seas and traditional mountain villages. Pyrgos, Kardiani and Isternia are among the most beautiful on the island. Tinos Town itself is home to the island’s main harbour and has welcomed in the tourists – and pilgrims – providing visitors with everything they need.

The southern shores of the island are where you’ll find the best beaches with the best facilities, including Agios Ioannis Porto, Agios Sostis, Agios Romanos and Kionia. Tinos is among the few Greek islands where you can go surfing. Head to Kolymbithra beach if you want to “hang 10”. 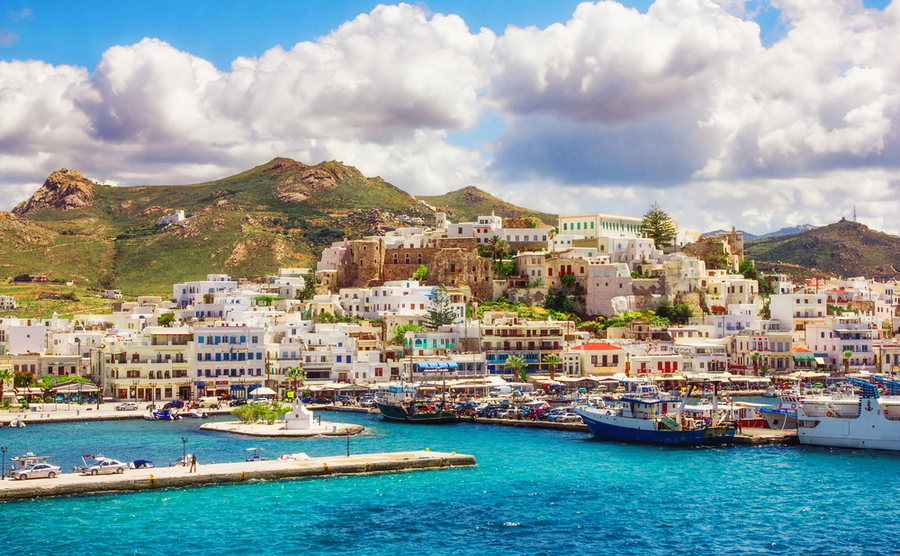 The port at Naxos

Naxos is the largest of the Cyclades, and with a highest point of 3,284 feet is also the loftiest in the archipelago. The rain clouds that form around the mountain peaks ensure the island is more fertile and verdant than its neighbours. This is great news for lovers of fresh Mediterranean produce, particularly olives, grapes, figs, citrus fruit, corn and potatoes. Explore the island’s rugged interior and you will pass through scenic mountain villages like Apiranthos, Sangri, Halki and Koronos.

Naxos is more fertile and verdant than its neighbours.

Its main town Hora (known also as Naxos) is comprised of steep cobbled lanes that form an old quarter known as the Kástro and a gorgeous waterfront. The island exudes a low-key vibe away from Hora. Here you’ll find isolated beaches and a scattering of towers, monasteries and mansions left by the Venetians and their descendants. The ace up the island’s sleeve is its south-west-facing coast, which forms one long sweeping beach from the resort of Ágios Prokópios to Agiassós on the south cape.

Getting to the islands

More and more people are flying to Mykonos, testament to its growing popularity. In 2017 1.2 million passengers passed through its airport, a rise of 18.6% compared with 2016, according to figures from its owner Fraport. And between 2013 and 2016, the number of international arrivals to the island almost doubled. You can fly direct to Mykonos with easyJet from Gatwick, Luton or Manchester, or with British Airways from London City. Other international airlines fly direct or via a transfer at Athens.

Naxos, Syros and Paros all have airports, making it possible to fly to Athens and get a connecting flight during the summer months. All of the islands can be reached by flying to Athens and taking a ferry from nearby Rafina throughout the year.