5 places to buy within an hour of Athens

Athens may be one of the greatest cities of the world, but living there can be a little frenetic! So where offers the best of both worlds – countryside, seaside, and a base near the city? Long-term expat in Athens, Lynne Evans has a few suggestions.

About 20 kilometres from central Athens is Lake Vouliagmenis. You can spend all day there, swimming or just relaxing and putting your feet in the healing water. You can order a snack or three-course meal by the lake, depending on how hungry you are.

It’s pleasant to relax near the lake’s waters, though beware getting lost in the labyrinthine cave systems. In 1978 three American divers never resurfaced from the subterranean cave system. Local people were fascinated, and various explanations were suggested, including alien abduction until their remains were discovered almost 30 years later.

Some of the mysteries surrounding the Lake have been solved. In 2015 divers mapped part of the cave system, and we now know the mineral composition of the waters. In the past they were thought to mainly consist of salty sea water. Locals speculated about how this might be, as the lake is approximately 50 metres above sea level, and various theories were touted at local and national levels. The Lake’s warm waters are reputed to be therapeutic and attract many Greeks. Foreign tourists also visit, although they have been slow to realise that it exists.

Stay all day, or just drop by for an hour, the choice is yours. You could stop at the lake on your way to the Temple of Poseidon and return to Athens after seeing the sunset at Cape Sounion. 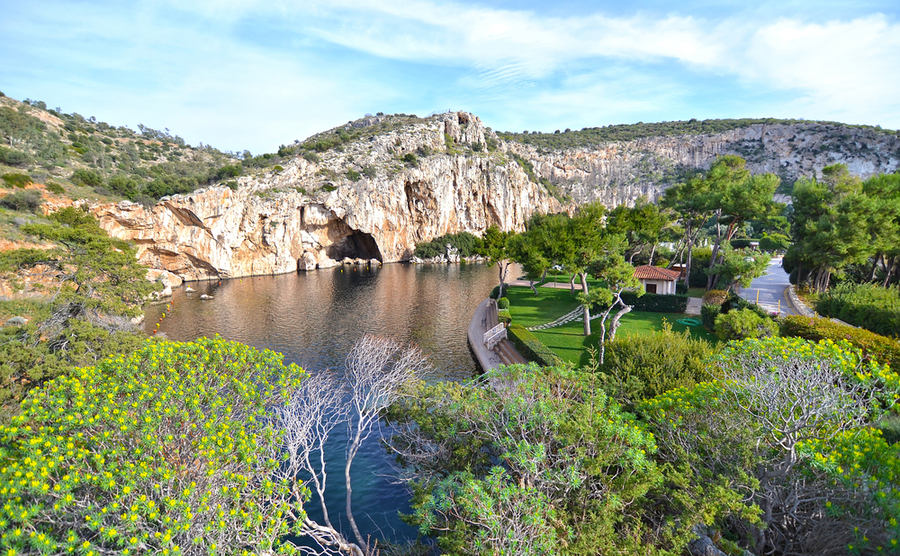 Lake Vouliagmenis, a wonderful place to live, less than an hour from Athens

If you like the sound of living near the lake, you could look at property in Vouligmenis. Beware though, it’s one of the most expensive areas for properties in Greece. To give you an idea of the prices, a one-bedroom apartment of 50 square metres is currently on the market for €290,000. Apartments in the centre of Vouliagmenis go for upwards of €200,000. If you have a few million euros to spare, look here for a villa.

The Temple of Poseidon, Cape Sounion

Don’t miss the temple at Cape Sounion, which marks the end of the Athenian Riviera, not least for the views at sunset. The road to Sounio from Lake Vouliagmenis is characterised by hair-raising bends, but you can return to Athens another way on the Athens-Lavrio road. 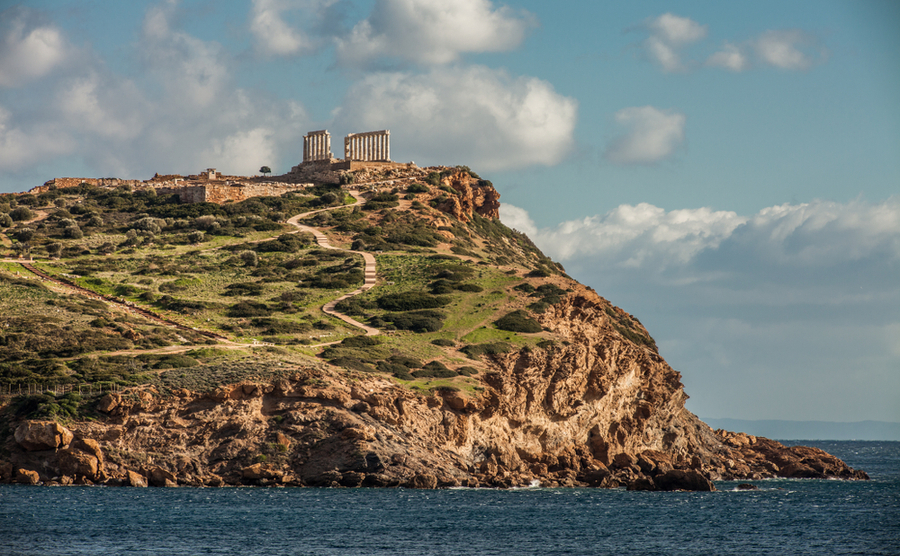 Cape Sounion and Temple of Poseidon

There’s a large car park close to the temple site and on the way through the car park, look towards the sea. You may be lucky enough to see the bevy of partridges that have made burrows in the mound there. These are protected birds, so although they look plump and tasty, resist temptation. There’s a cafe on the way up to the temple, but if you are hungry, there’s a very good fish/seafood taverna on the beach below the temple.

There are two tavernas in fact, opposite each other, but the best is the one on your left, Akrogiali, on the beach. Although it is primarily a fish taverna, there is always meat and vegetarian options. The tsipouro is very good so if you are offered any, try it. Wine is sold by the carafe, although you might have to ask for this (it’s much cheaper than a bottle).

At sunset the last rays of the sun stream through the temple’s Doric columns, making for a spectacular sunset.

The climb to the temple is worth the effort for the view. Legend says that King Aegeus threw himself off the clifftop where he had been on the lookout for his son Theseus’s ships. Theseus had gone to Crete to kill the minotaur, and if his mission was successful, he had arranged with his father that he would raise white sails. Unfortunately, he failed to do this, and on seeing black sails on his son’s ship, the grief-stricken king plunged to his death as he believed his son had been killed.

At sunset the last rays of the sun stream through the temple’s Doric columns, making for a spectacular sunset.

If you have a hankering for a home near Sounion, you might want to think about a maisonette which could be yours for half a million euros with an outdoor swimming pool, or a detached four-bedroom house with pool for €1,200,000.

Need to raise a little more money to buy your dream home in Greece? Read how in our new guide, How to Pay for an Overseas Property.

Lavrio is a port not generally on a tourist’s itinerary. The nearby ancient quarry of Agrilesa supplied the marble used for the construction of the Temple of Poseidon at Sounio, which is just four kilometres away. Marble from the quarry and silver from the mines near Lavrio were exported from its ancient harbour. 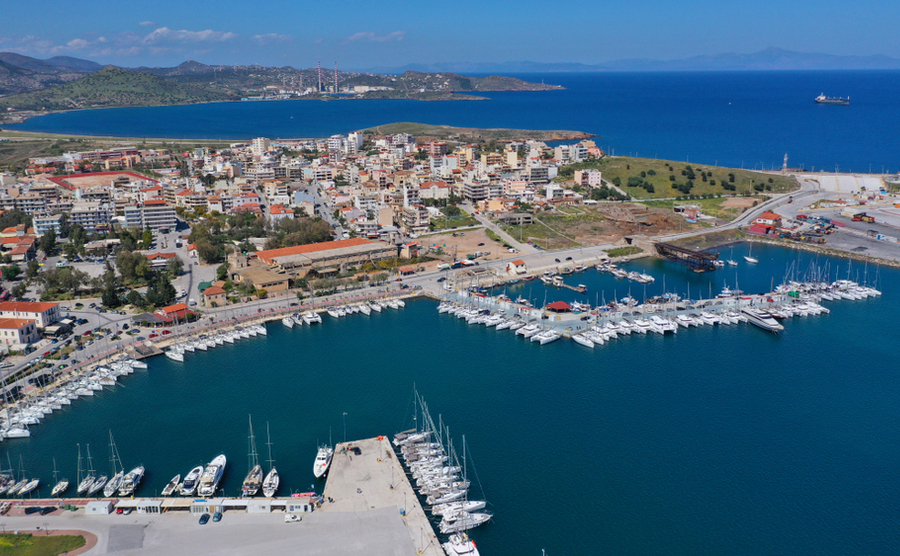 The port of Lavrio

You might want to check ferry times from Lavrio to the small island of Kea and take a short break away from Athens. Ferries from Lavrio go to the Cycladic group of islands. In winter ferries are few and far between, but they do go to Kea twice a week.

While in Lavrio, visit the Archeological Museum where artefacts from the Temple of Poseidon are housed. If you are interested, there is also a ‘mineralogical’ [is this a real word, I ask] museum.

I usually get to Lavrio in the late afternoon and treat myself to an ice-cream on the promenade where I can indulge in people watching. It’s a great place to sit, chill and look at the sea.

Modern Lavrio was mainly built in the  19th and 20th centuries, so for me, it is simply a place to stop for a short break and enjoy an ice cream or a frappe.

Property prices are cheaper in Lavrio. If you want a one-bedroom apartment on the ground floor which is in need of renovation, it would set you back €24,000, but renovations don’t come cheaply. A new apartment on the first floor, with 81 square metres of floor space is currently (October 2019) for sale at €125,240. Prices increase, but are usually around the €100,000 mark.

The modern town of Corinth is the gateway to the Peloponnese. It is around an hour’s drive from Athens, depending on the traffic. To get to the town you cross the Corinth Canal, and can stop to take photos from the bridge. Park in the carpark after crossing the bridge and have a coffee before you go on to explore Ancient Corinth. 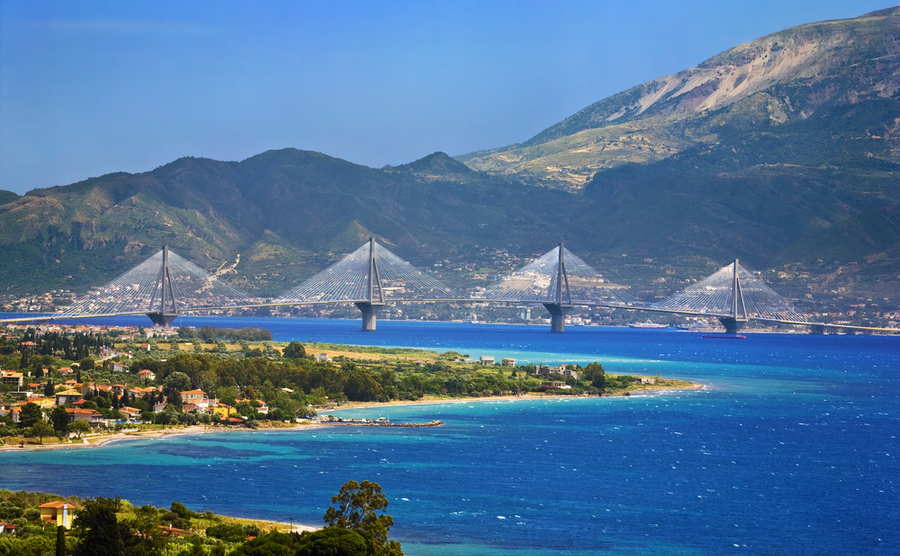 There’s a folk museum in the town which houses traditional Greek costumes dating from the 18th and 19th centuries. Corinth also has a beach area.

Ancient Corinth is about 9 kilometres from the city centre, with ample parking. You can join a guided tour or stroll around the ruins on your own. Don’t miss the onsite museum.

Read our Healthcare Guide to accessing medical attention in Greece compared to 10 other countries.

You may want to go up to Akrocorinth before you leave the area. It’s worth going up to it for the views. There’s also a taverna where you can usually get something to eat. The owners are friendly and welcoming, although they don’t speak much English. This could be your chance to practise your Greek with strangers. The last stretch of the road to the fortress is bumpy, but it isn’t far to the car park [also unmade] or the taverna.

The fortress was added to by various civilisations who took advantage of its strategic position. You can see remains from the ancient Greeks, Byzantines, Italians and Ottomans, to name but a few of the peoples who once controlled the citadel.

You might want to return to this fortress, as it is impossible to see the whole site in one visit, unless you are very energetic. This is a memorable site which I have never seen crowded.

Properties in the town of Corinth range in price and the cheaper ones are old. For example, one two-bedroom detached house, built in 1946 is on the market for €40,000. The closer to the town the cheaper the property. There’s one small studio flat going for €23,500. for example. There is a range of prices which go up to more than a million euros for villas.

Loutraki, a pleasant seaside town with hot springs, is about 80 kilometres west of Athens. Since ancient times people have been visiting Loutraki because of its therapeutic mineral waters. Modern tourists also visit because of its casino. 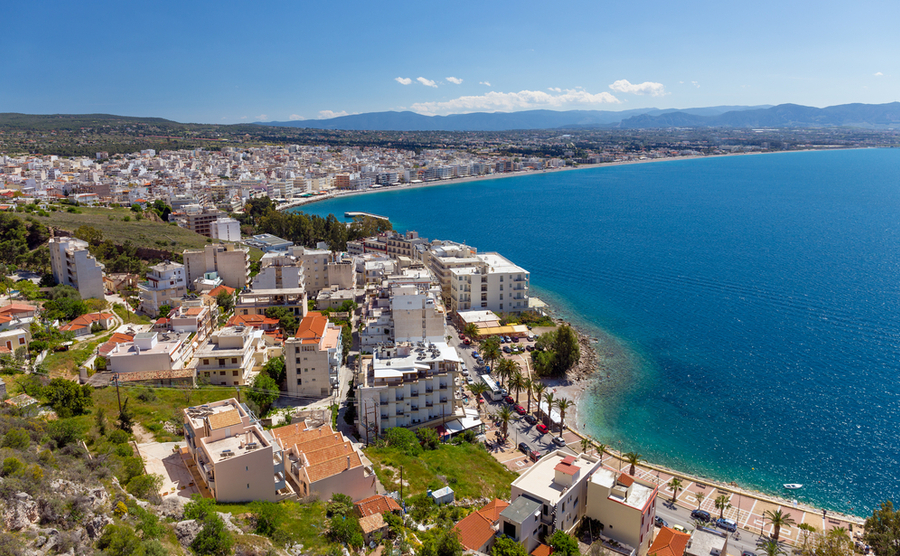 Loutraki, seaside, but handy for Athens

Property prices in Loutraki range from €36,000 euros for a small, (59 square metre), two-bedroom detached house on the beach to over a million euros for villas. There are, of course, different types of property, in various states of repair, for prices in between these extremes.

Above the town are several tavernas with some amazing views of the town and the sea. If you wish to explore the Loutraki area further, you might want to visit another Lake Vouliagmenis, which is 16 kilometres northwest of Loutraki. This lake is bigger than the one near Athens but it’s very beautiful and worth a visit in my opinion.

Another place worth visiting near Loutraki is Perachora, famous for its wine. There are several ancient sites in the area too, those of Peraea, Oenoe and the temple of Hera for example.

In Greece you never know what you will find on your way to or from your chosen destination, so allow time for delightful distractions.