Where to buy a holiday home in Greece

Before you begin your very own Greek Odyssey you must decide where to buy a holiday home here. Somewhere you can visit whenever you choose to enjoy the delicious food, fascinating history, rich culture and stunning weather! Will it be on one of the 227 inhabited islands, or the diverse mainland?

From Crete standing sentry to the Aegean in the south, to Thessaloniki – Greece’s second largest city – in the north, there’s appealing destinations aplenty. Here are some of our favourites to help you make up your mind.

Crete, the largest and most populated of the Greek islands, is practically a country in its own right. Its diverse landscape extends from the tips of the snow-capped White Mountains to the shores of its sun-drenched beaches. In-between you’ll discover rugged canyons, villages nestled in picturesque valleys, vast gorges and rolling hills. You might even stumble across the cave Zeus is said to have been born in.

Crete, the largest and most populated of the Greek islands, is practically a country in its own right

Having landed or docked in the island’s capital, Heraklion, you have several choices. Head west and you’ll reach the Venetian influenced towns of Rethymnon and Chania. Venture east and you’ll reach one of the island’s main resorts, Agios ikolaos. Known to Brits as Ag Nik, it has managed to retain much of its traditional charm, unlike some of its contemporaries elsewhere in the Aegean. Wherever you decide to purchase your pad you won’t have any trouble settling in. Crete is home to a year-round British and northern European expat crowd.

Zakynthos – Zante in Italian – is located in the Ionian Sea off the country’s west coast. Package tourism convenience can be found along its eastern shoreline in resorts like Laganas and Tsilivi. Aesthetic appeal courtesy of mother nature comes in the form of forested mountains in the central regions that slope down to white sand beaches on the western shore. The iconic Navagio beach, (aka “shipwreck beach”) is a perfect example. The limestone cliffs and turquoise water that laps them will leave you with no doubt as to why it’s considered one of the most picturesque in Europe. Getting here from the UK is a breeze thanks to direct flights from 13 airports.

When buying in the more expensive islands, effective negotiation could save you thousands. Read our guide: How to Negotiate Abroad.

When it comes to trendy sun-kissed hedonism in Europe, Ibiza doesn’t have the monopoly. With the jet set elite stepping off super yachts into its beachfront bars and boutique shops, Mykonos provides its own party lifestyle in glamourous surroundings. 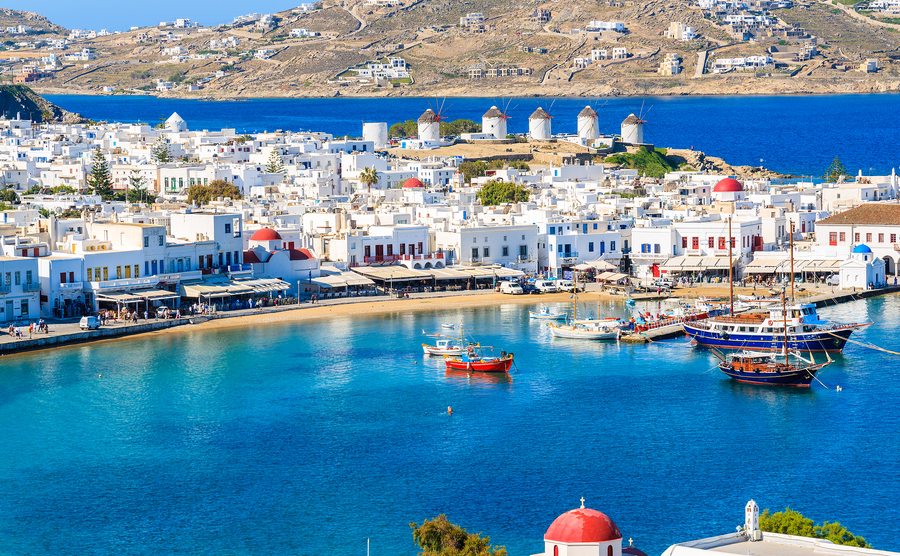 The west coast is where it’s at if you want a good time. It’s also home to the most desirable places to own a holiday home. Mykonos Town, with its ancient harbour and picturesque ‘Little Venice’ quarter, is the island’s liveliest spot. Agios Lazaros, Agia Sofia, Tourlos and Houlakia are worth checking out on your viewing trip. As is Platis Gialos; a more laid-back option in a more traditional setting.

Known as the cradle of western civilisation, Greece’s capital is home to 2,500 years of history. Buy here and you will have the most important ancient site in the Western world – the Acropolis – on your doorstep.

Life in contemporary Athens is equally interesting. For a start the vibrant nightlife in its hip bars and cafes gives the city an infectious energy. Check out the picturesque Palaka neighbourhood to enjoy cobbled streets, boutiques, period architecture and sunny piazzas. Located near the Acropolis is the sleepy hillside village of Anafiotika; an urban slice of Cycladic island life, with its labyrinth of alleyways connecting whitewashed houses. Metaxourgiou is fast gaining a reputation for offering a hip alternative to more traditional areas, with its art galleries and trendy food joints.

Greece’s capital is home to 2,500 years of history

The best bit is, property in Athens – typically apartments – is often cheaper than other European capital cities like Lisbon, Madrid, Berlin, Vienna and Paris.

The Peloponnese region in southern mainland Greece has an impressive historic pedigree, both mythological and sporting. Not only are Hercules, Paris of Troy and the Argonauts are all linked to the peninsula, it’s the birthplace of the Olympic Games. 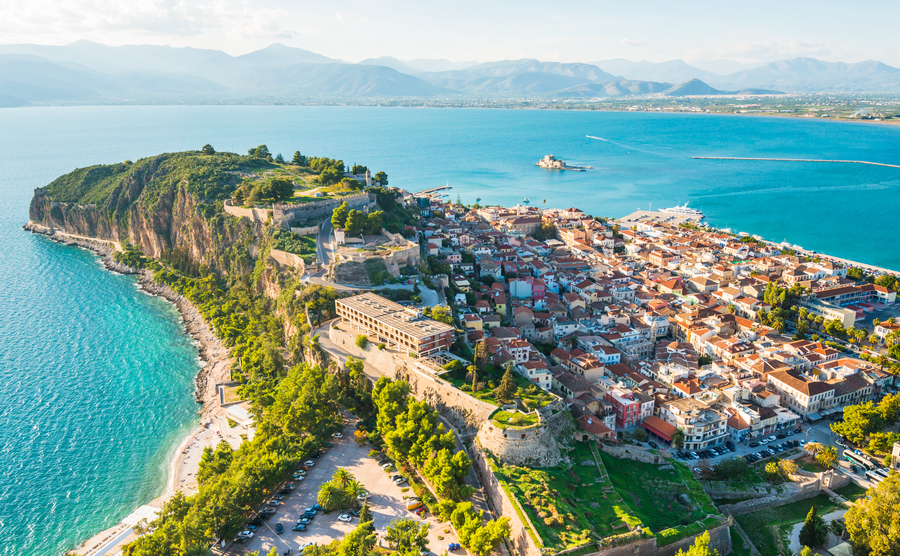 Mythological charms aside, The Peloponnese has a diverse landscape where snow-capped mountains and vast gorges sweep down to sandy beaches lapped by crystal clear waters. Deciding where to head on your viewing trip to the region can be a tricky task given the plethora of attractive towns and villages. Navplio is a charming Venetian town and Pylos has a splendid natural harbour. Astros, Sofiko, Nea Epidarios, Nea Kios and Nafplio should also be included on your list.

Greece’s second largest city sits on the banks of the Thermaic Gulf, in the northwest corner of the Aegean Sea. The symmetry of the buildings – constructed following a huge fire in the 20th century – makes Thessaloniki easy on the eye. As does the Parisian inspired tree-lined boulevards, spacious squares and pedestrianised walkways. Down on the waterfront you find an intriguing combination of historic and contemporary. The old port and its shiny new sibling both offer spectacular views, magical sunsets and a vibrant café culture – it’s the home of the frappe.