Moving with children to Greece: settling in, schools and learning the language

Should I be worried about moving?

Absolutely not! There are around 20,000 British citizens living in Greece – many of whom have been there for a number of years. As a culture, it’s immensely welcoming to children. Not only that, but children quickly pick up other languages and adapt. In fact, you’ll probably find they settle in even faster than you! 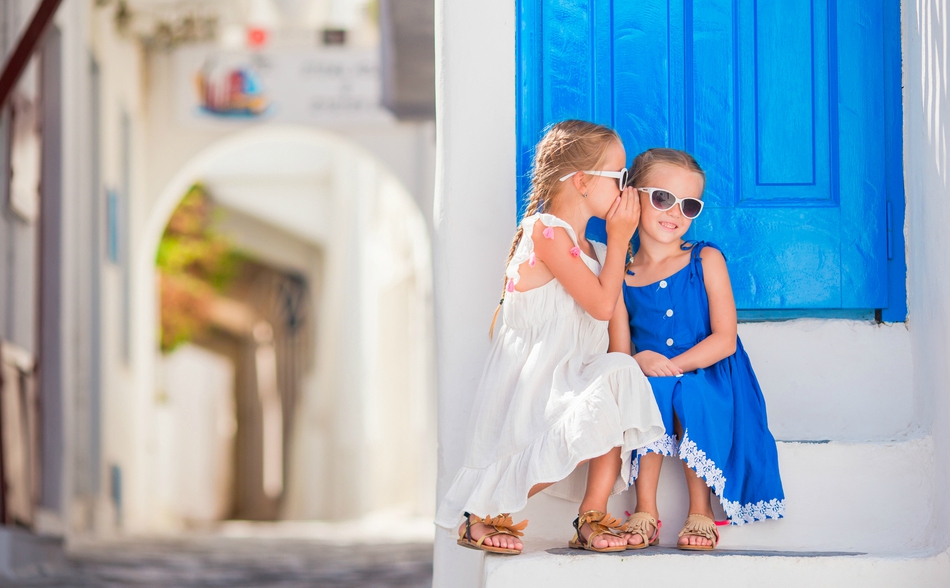 Moving with children to Greece offers the chance for a healthy, outdoorsy lifestyle that’s hard to get in the UK.

However, it is a good idea to make sure that they feel on-board with the process right from the start. Involving them in deciding on an area and, where possible, taking them with you on final viewings of properties can help them feel like they’re really part of the decision. The first couple of weeks can be tough as they miss their friends and take their steps in the language. However, this soon passes – and they come out the other end confident and independent!

Why is Greece fantastic for children?

What child would turn down instant access to the beach, fantastic weather and probably a larger house, given cheap property prices? Without constant grey skies and rain, your child will have a healthy childhood like many people remember their own – outdoors and away from electronic screens.

In many of the small towns and villages popular with expats, everyone knows everyone. That means you’ll find plenty of support – and it’s perfectly safe for your children to play out.

Local Greek schools are a great option if you want your child to become fluent in Greek as soon as possible. State schools are facing problems due to the Greek economic situation, so a lot of qualified teachers are leaving the profession.

Private education is extremely popular here, with 7% of students attending an independent school. Greeks generally consider them superior to state schools. Fees are usually between €7,000 and €13,000.

If you’re transferring money overseas, either for a purchase or regularly, make sure you know how to control the risks of changing exchange rates. Find out how in the Property Buyer’s Guide to Currency.

Both follow the regulations of the Ministry of National Education and Religious Affairs and follow the state curriculum. There is a lot of rote memorisation for when they sit the Panhellenic Exams. This can suit some children, but some will find it doesn’t fit them well. Many Greek parents hire a private tutor to help their children through the exams.

Many expats moving with children to Greece choose instead to send them to international schools, where they can study either British qualifications or ones like the International Baccalaureate. You may, however, find that they’re not available in all areas.

Many expats moving with children to Greece choose instead to send them to international schools, where they can study either British qualifications or ones like the International Baccalaureate.

Here are some of the main international schools in Greece:

One of the most established international schools in Athens, St Catherine’s School is well known for the quality of its education. It follows the English/Welsh curriculum for ages 5-16 and then the International Baccalaureate for 17-18. The majority of students are bicultural, with one Greek parent and one foreign parent, so the school avoids the ‘four year changeover’ phenomenon of ones with a large expat student base.

Byron College, in Athens, follows the British curriculum. It takes students right from EYFS through to Year 13. They can study for the IGCSE and ‘A’-levels. Students also follow an international programme to give them a rounded outlook, with opportunities such as participating in the International Model United Nations conferences.

Pinewood AIS is located in Thessaloniki, the second city of Greece. It takes students from Early Years through to 18. Students have the choice, as they progress through the school, to follow either an American high school diploma, a full International Baccalaureate programme or a combined IB-American diploma.

School of European Education of Heraklion

International education on the islands is limited, but one option in Crete is the School of European Education of Heraklion. It takes primary and secondary students, both of whom will study bilingual programmes in a mother tongue and second language. They will eventually take the European Baccalaureate, which is accepted in British universities.

School of European Education of Heraklion

Moving with children to Greece

Moving with children to Greece can be a fantastic chance for a change for the whole family. It can be a daunting prospect, but, with the right organisation, it can all go smoothly. Before you know it, your children will have settled in with local friends – and offering to teach you Greek!