5 reasons why Greece is great for expats

For anyone seeking a new life abroad, Greece delivers on every front, including your money, health and lifestyle. If you’re in the decision-making phase, here are five reasons to make Greece your next move.

With more than 6,000 sun-kissed islands, ancient architecture, and a culture ingrained with a long and fascinating history, it’s no wonder why tourists flock to Greece each year. But visiting a country is one thing and living there is a very different story. To help you decide if Greece is as great a choice for expats and retirees as it is for tourists, we’re exploring five compelling reasons for moving to Greece.

English speakers have little difficulty settling in, as English is widely spoken in Greece. However, as one long-time expat there says: “while many people, especially younger people speak English, it is important to learn the basic phrases and use them to open any conversation”.  Patricia Hajifotiou, moved here from America 18 years ago and is now owner of tourism business The Olive Odyssey. 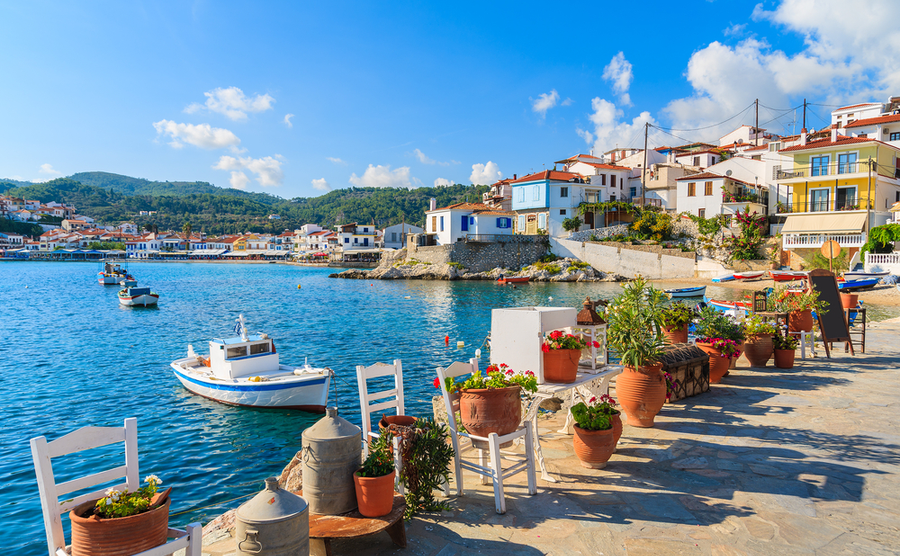 The simplest of phrases, she says, such as “hello, goodbye, please and thank you, can work magic in any language”. To truly integrate into the culture and feel more at home, it’s always beneficial to learn the local language. You won’t need to be fluent right away, just pick up as many phrases as you can to help you communicate with the locals. Besides, the Greek language is simply beautiful and is an integral part of the country’s literary culture.

Language, however, is only one aspect of Greek culture. Moving to Greece, you’re sure to enjoy the rich, immersive culture that the country has to offer. Home to ancient architecture, religious festivals and cultural events, food, wine and music unique to the land, it’s no wonder the Greek culture is so well-loved by locals, tourists and expats alike.

Greeks are known for their friendly and welcoming nature, so it shouldn’t be too difficult to make friends. For Patricia, “Greeks are generally very friendly and outgoing”. She notes that “it is especially important to have eye contact and say ‘good morning’ when passing someone when you have established yourself in a neighbourhood”. You can even try it in the big cities!

Another thing to keep in mind is that “people may sometimes ask you very pointed questions – ‘are you married’, ‘how much does your job pay’, etc. This is ordinary for Greeks, but sometimes intrusive for other cultures. Answer what you feel comfortable with,” advises Patricia.

And when you come to buy a property, Greek homes prices are only starting to recover from a decade of falls, so you could easily see a significant profit over the next few years.

While the overall cost of living in Greece is much lower than other parts of Europe, note that average local salaries are also lower. The public healthcare system also suffers from a lack of funding and lengthy waiting times, which is why many expats and locals choose to use the country’s private medical facilities instead. For expats, it is wise to invest in a global healthcare policy to help you cover the costs and gain easy access to the country’s private healthcare system and services.

That said, you’ll still be able to achieve a high standard of living while living in Greece. The food, for example, is as affordable as it is fresh and delicious, especially in Rhodes, where there are no import duties.

Rather than eating to live, Greeks tend to live to eat. As such, food is a large part of Greek culture. Every meal is seen as a social occasion, meaning lunch or dinner can last for hours, and the more people gathered at the table the better. Above all, authentic Greek cuisine is utterly delicious and traditionally consists of fresh local ingredients including Mediterranean vegetables, olive oil, lemon juice, fish, meat and grains.

It’s never difficult to find fresh fruits and vegetables in local supermarkets for cheap, and eating out is just as delightful, with a variety of authentic local and international eateries on offer. In particular, major cities like Athens are home to a large array of international restaurants, where you’ll find Thai, Vietnamese, Korean and Indian cuisine, among many others.

For Patricia, “one of the best things is mezedes, or small plates. You can go to a taverna with friends and fill your table with these small plates, break bread and have a very nice slow and tasty meal.” She also advises that expats “order seconds of the plates you love!”

Moussaka, Fasolatha, Koulouri, Loukoumades and Souvlaki, to name a few, are some of the most popular Greek dishes, but it doesn’t end there. Be sure to try local wines and cheeses which are particularly delectable.

To put it simply, the weather in Greece is glorious. With luxuriously long, stretched out days and warm evenings, there’s no disputing the fact that Greece has a climate attractive to expats. While the weather can vary from place to plan, no matter where you choose to settle you’ll always enjoy scorching summers and relatively warm winters. In fact, Athens is known as Europe’s hottest city, with average high temperatures of 30°C.

“The one thing I really like about Greece is not just the weather, but more correctly, the light” says Patricia. “There are few places that I have been where the colours, the sky and the sea are so well lit up”.

Greece is well known for its laidback lifestyle, which can be a blessing for those looking to enjoy a more relaxed approach to life. “Greeks are not all that rushed,” says Patricia.

“You can still impromptu, call up a friend and meet. I have a group of friends that I usually meet for ‘coffee’ and it turns into a six-hour visit! When I lived in the US, you would have to make a date weeks in advance for a short coffee, because everyone is so busy”, expresses Patricia.

As well as putting an emphasis on taking the time to enjoy life, Greeks value family above all else. So if you’re moving to Greece with children in tow, you’ll be delighted to know that family time is a core part of the Greek way of life.

With a laidback lifestyle, a low cost of living, and year-round glorious weather, it’s easy to see why Greece is great for expats.