Each year we conduct our Property Guides Cost of Living Index across 12 countries, comparing the prices of everyday essentials, a supermarket shop, healthcare, leisure activities and more. So, if you’re dreaming of a new life in sunny Greece, find out what to budget for and where your money will go further than back home.

Greeks have an eye for a bargain and most know exactly where to go for the best deals, which may not always be found in the big supermarket chains. The big exception to the lower cost of living is imported goods, because of the tax, so finding your local equivalent is often the savviest option.

Prices are just half the story, especially if you’re receiving an income from abroad. To accurately budget you need to account for currency volatility. Read the Currency Guide to Emigration, free to download.

Greeks eat well without paying the earth. The first thing you’ll notice is that fresh produce is largely much cheaper than in the UK. A kilo of tomatoes will cost you half what you’d pay back home. There are a few outliers; bread is pricier, but this is because people tend to get their bread in local bakeries. The baker will slice your loaf for you, but you may have to hunt for wholemeal bread. Most people buy white bread, similar to French sticks, and these typically cost 60 cents. If you want wholemeal bread, ask the baker for some and have a standing order for it. This will be much cheaper than packaged bread. 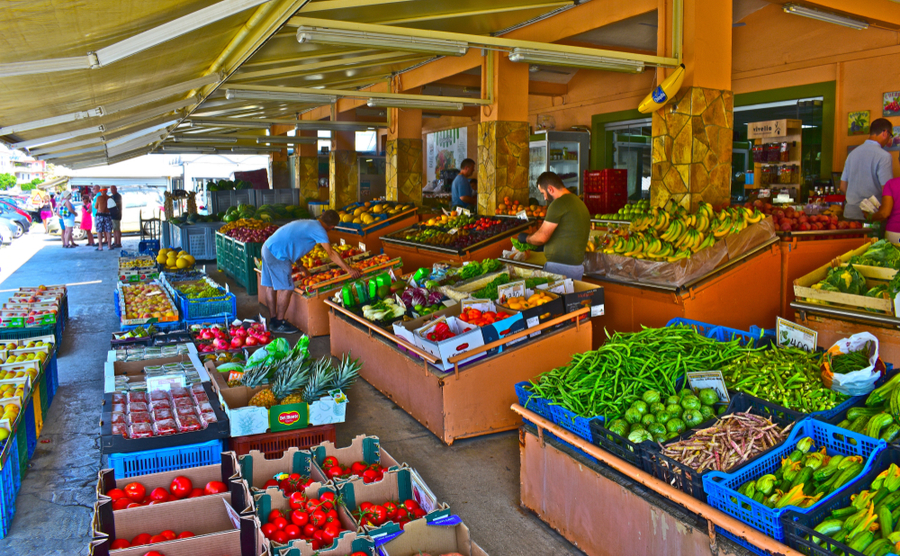 As above, imported goods are more expensive, so buying the same brand as back in the UK can cost a bit more. Ask/shop around and find your local equivalent! For example, a Greek ice-cream, with flavours similar to those made by Haagen-Daz, is Algida. There’s also Dodoni, if you can find it, but this brand has its own chain of café bars where the ice cream is sold.

Tea is a bit harder to find here, and most Greeks will only drink ‘black’ tea in winter, with lemon and probably honey, as a cold or flu remedy, and the go-to brand is Liptons. It’s worth stocking up in the UK!

Shopping around will yield you the best deals, and I like to use KillDeal.gr to find the best bargains in the major supermarkets.

Travel costs on mainland Greece are cheaper than back in the UK, with a return train fare from Athens to Corinth (just over an hour’s journey) costing just €8. Hiring a car in Greece is a bit more expensive than back home, but fuel is noticeably cheaper. If you’re thinking of going electric, Greece isn’t quite there yet, with only a few charging stations nationwide.

If you’re living on the islands, ferry travel will be your main mode of getting around the rest of the country in the off-season. While more expensive than Greek trains, it’s not too high if you don’t need a cabin. A ‘deck’ ticket usually costs in the mid-20s or less; there are plenty of tickets currently available for Mykonos-Athens at €20 this November, for example. Longer, overnight trips to islands like Crete are in the region of €35 for deck price or around €110 for a two-person cabin. Prices are naturally higher if you take a high-speed ferry (expect to around double your usual price). Generally, you don’t need to reserve tickets in advance, unless you’re going to Lesbos or Mykonos on holy days, as the ferries also stop at the pilgrimage islands of Tinos and Agiassos and they get packed.

It’s a bit hit-and-miss when it comes to home prices, with electronics like a Samsung TV and Alexa Echo Dot less expensive than in the UK. If you’re renting out a holiday home (or just don’t fancy spending your time scrubbing the kitchen when you could be enjoying the beach), budget around €10 for a domestic cleaner per hour, or around £4 less than back home. Home internet is expensive and can be rather hit and miss. I opted for a fast service and pay 36 Euro a month for the privilege, but that’s from the most reputable provider, Cosmote, and includes a landline connection.

Heading out to Greece soon? Don’t miss your copy of the Viewing Trip Guide so you know exactly what to look out for when seeing properties.

As with food, foreign goods are a bit more expensive. Your IKEA “Billy” bookcase is a lot more than you’d expect back in the UK, but you can find much cheaper options shopping around local stores like Epiploidees.

Most of us move to Greece to enjoy the relaxed Greek way of life, and the good news is that this is largely cheaper than in the UK. Eating out doesn’t have to be expensive, as you can usually buy a carafe of wine that is about 5 euros for half a litre. Tavernas are cheaper than restaurants, and you can tell whether they are good or not by the number of Greeks eating in them. A fish/seafood meal is more expensive than a meat or vegetarian one. 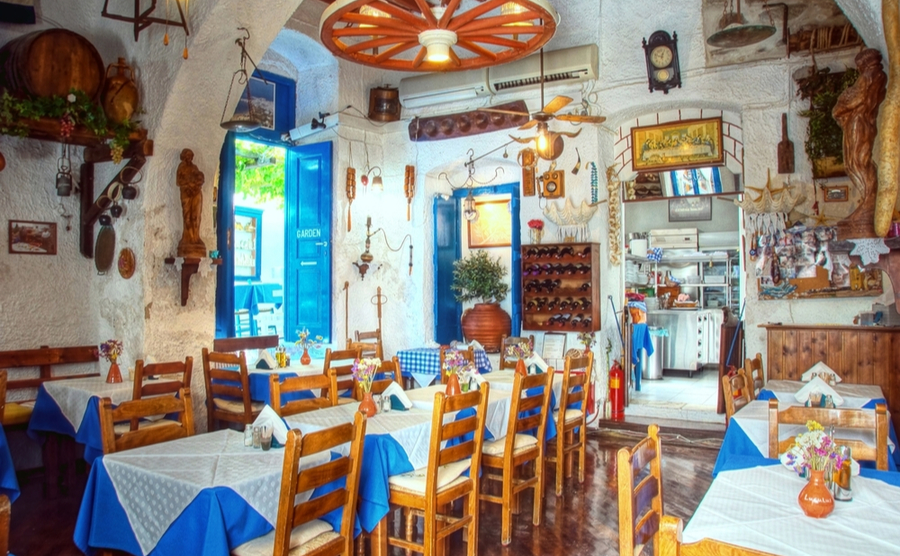 Tavernas will often be cheaper than restaurants.

A bottle of wine, if available, is cheaper in a taverna too. If you are ever looking for a fast food, MacDonalds have Greek rivals such as Everest and Goodies. These have burgers as well as healthier Greek options such as cheese and spinach pies at lower prices.

Generally, many expats will go for private healthcare insurance in Greece. However, even without this, you’ll find the system is not expensive. If you pay social security contributions, then consultations with IKA-registered dentists are free. Prescriptions, too, are free.

As in much of mainland Europe, paracetamol is a bit more expensive than in the UK, but not by much.

Greece is a fantastic place to bring up children, who can enjoy a healthy, active lifestyle that just wouldn’t be possible with British weather! Greek society in general is very family-oriented, and prices for children’s activities, like a swim at a local pool, are low. That said, most tend to head to the beach rather than the pool, which is completely free!

Many of the larger towns in Greece have the same chains as we’re familiar with across Europe, including on the larger islands like Crete and Rhodes. Prices are more or less equivalent to in the UK, but sales can see discounts of up to 70%. The main sales periods are the second week of January until mid-February, the first ten days of May and the second week of July until the end of August.