Where can you buy on a budget in Cyprus?

Sun, sea, sand, appealing cities, a diverse landscape and low-cost flights: it’s no wonder Cyprus has been growing in popularity. In 2017 alone a record-breaking 3.6 million tourists visited the island; an impressive number that the Cypriot government fully expects to surpass by the end of this year. But it’s not just visitor numbers that have been increasing over here, so have property prices.

According to the Royal Institution of Chartered Surveyors Property Price Index, the average price of apartments and houses rose by 0.8% and 1.4% respectively across the island during the final three months of 2017. Larnaca recorded the largest increase in apartment prices (2.7%), while Limassol reported the largest rise in house prices (1.5%).

The average price of apartments and houses rose by 0.8% and 1.4% respectively across the island during the final three months of 2017

Fret not! Whether you’re in the market for a holiday home or considering moving here permanently, Cyprus remains an affordable option. So how do property prices compare in the island’s four most popular destinations with overseas buyers: Nicosia, Paphos, Larnaca and Limassol?

You need look no further than London to understand that capital cities are typically the most expensive places to live. However, Limassol on the southern coast of Cyprus is an exception to the rule. According to Numbeo – a global database of reported consumer prices – the average price of an apartment in the centre of Limassol is around €2,400 per square metre (psm) – making it the most expensive city to buy property in Cyprus. The reason for this is simple: luxury residential high-rise development is booming there. So much so that it will soon be home to the tallest seafront tower in Europe.

Despite being expensive by Cypriot standards, Limassol’s affordability becomes clear when compared to other island destinations in Europe. For example, the average price of a city centre apartment in Palma de Mallorca currently sits at €3,700psm. 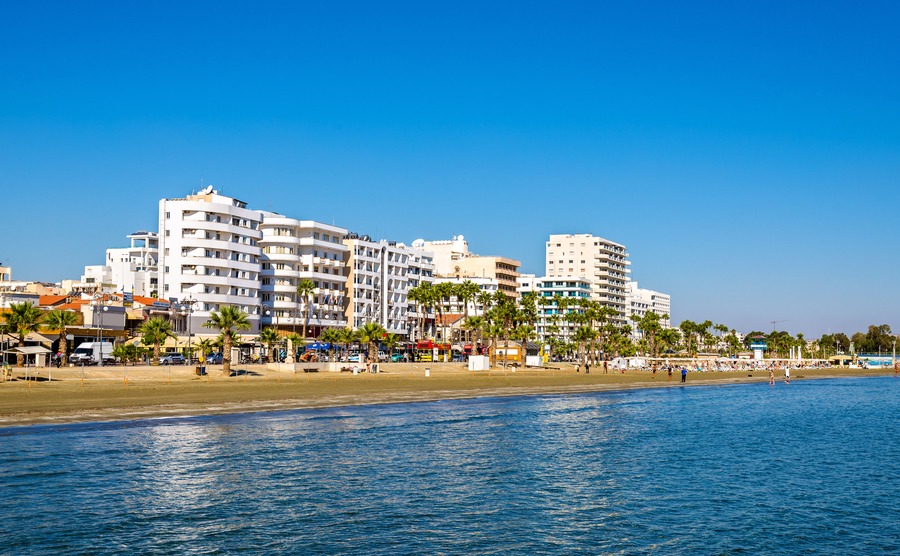 If you want all the conveniences of capital city life at an affordable price, Nicosia should top your viewing trip list. Residents enjoy the urban sophistication of a modern, cosmopolitan city. All of which is just a short drive from the sparkling Mediterranean and spectacular forested mountains. Apartment living is the name of the game around here. The average price of an apartment in central Nicosia is around €1,800psm.

Despite traditionally being the most popular area for British buyers in Cyprus, average apartment prices in central Paphos (€1,475psm) remain lower than Limassol and Nicosia. Life among an established expat community, with blue flag beaches and an international airport on your doorstep enhance its appeal. It’s worth noting that the wider Paphos area attracts young families and retired couples looking for spacious homes to accommodate kids and grandkids. This trend reduces the demand for apartments and drives up house prices.

The lowest average apartment price (€1,280psm) is found in the port city Larnaca. Head outside of the centre and the average price drops below the €1,000psm mark. Perhaps this is because Larnaca is a little more traditionally Cypriot than some of the other locations on the list. Great if you want to avoid expat communities and their typical lifestyle, but still benefit from a local international airport. So, head to Larnaca to bag a bargain and take advantage of rising prices that could see your home grow in value.

Wherever you choose to live in Cyprus, knowing how to negotiate for your property should get you a little more house for your money! Download our guide: How to Negotiate Abroad.