Cyprus: where to buy (apart from Paphos!)

From the coast to the mountains and everything in between, Cyprus offers something for everyone.

Cyprus is an island for all tastes, where you’ll be able to find the perfect location for retirement, a holiday home or work relocation. If you like strolling along a palm-lined seafront with a light Mediterranean breeze in your hair, the port city of Larnaca springs to mind; if big city life is more your thing then capital Nicosia ticks all the boxes; or if you’d rather get away from it all and live in tranquil surroundings, village life in the Troödos Mountains offers peace, quiet and an escape from the heat and humidity.

Buying a property overseas is a big decision that you’ll want to get right both financially and emotionally. So let’s take a closer look at these very different locations to see what this diverse island has to offer you.

If you’d rather get away from it all and live in tranquil surroundings, village life in the Troödos Mountains offers peace, quiet and an escape from the heat

If you have your heart set on living in or around a Cypriot port city you have a straight shootout between Paphos, Limassol and Larnaca. If you want a more relaxed pace of life away from areas overrun with expats and tourists, sleepier and more levantine Larnaca ,with its salt lake and palm trees, could be the place for you. Although not teeming with visitors this beautifully compact city still offers everything most Brits crave from a life by the Med: a city centre beach backed by a palm-lined prom, a mix of traditional and cosmopolitan establishments, ancient monuments and fascinating architecture. You can even fly to the city’s international airport from Manchester. Failing that you can hop on a cheap flight to Paphos, located just down the coast.

There’s a range of property to suit all budgets in Larnaca, starting at just £65,000 for a two-bedroom, city centre apartment that’s ready to move into. 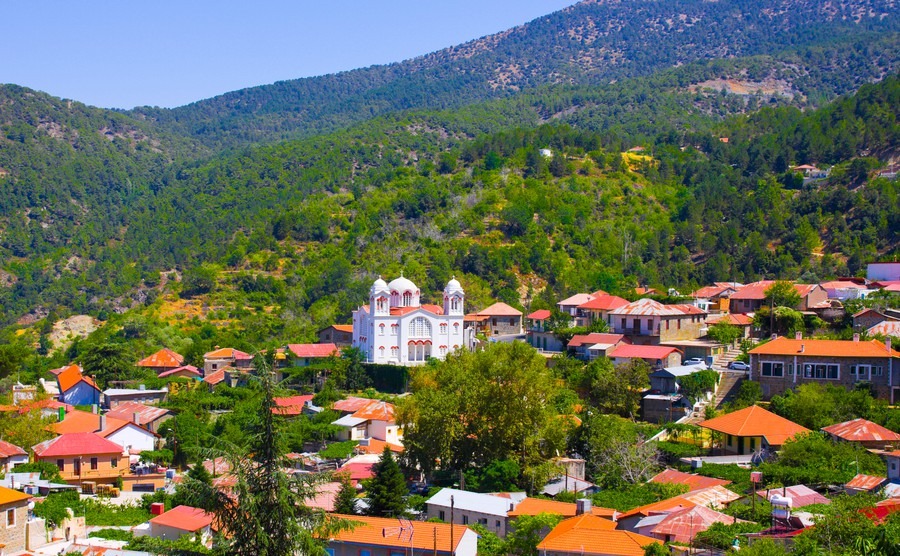 The village of Pedoluas, nestled in the Troödos Mountains

If you crave the hustle and bustle of city life and are willing to keep the coast’s beach and sunbed scene at arm’s length, make sure you take a viewing trip to the country’s capital, Nicosia. It’s a perfect advert for modern life in Cyprus, where the ancient walls and traditional restaurants sit alongside an increasingly young café and cultural scene. You’ll probably find yourself tracking down the local Debenhams, but not just for the home from home shopping. Its top floor offers a superb, panoramic view of the city and you can see beyond the “Green Line”, which has divided Cyprus since 1974, into Turkish North Nicosia. Contained within the 16th-century Venetian walls of the old town you’ll find museums and art galleries. While a stroll through the atmospheric Laiki Geitonia neighbourhood will unearth narrow streets lined with cafés and artist’s studios.

Despite being the capital city you can still pick up a two-bedroom, city centre apartment for just over £82,300.

Even at the height of summer you’ll find cool, pine-scented air, quiet villages and lonely monasteries

If you’d prefer to be far from the madding crowd the Troödos Mountains, rising to nearly 2000m/6500ft north-west of Limassol, could be your idea of heaven. A massive expanse of igneous rock, carpeted with forest which, millions of years ago, rose like Aphrodite from the sea. Even at the height of summer you’ll find cool, pine-scented air, quiet villages and lonely monasteries. Here are some mountainous hotspots:

• At 1,750m Troödos Village is only 250m below Mount Olympos, the island’s highest point and during the winter months doubles as a ski resort. Yes that’s right, you can even ski in Cyprus

• Argos, the main village of Pitsilia region, is littered with red-roofed houses – many of which are on stilts – cupped by the mountains at the head of the Agros valley.

• Located in the Marathasa Valley north of Prodromos, Pedoulas is peppered with houses that tumble down the hillside in a series of terraces and is home to a beautiful painted church.

• Kakopetria sits astride the Karyotis River and contains all the necessary conveniences of modern life, to compliment a pretty – and now protected – old town containing narrow streets and tottering houses.

The Cyprus Buying Guide covers every stage of the property buying process, sharing our experience and knowledge to ensure a safe and successful property purchase. The guide will help you to: