Bordered on the south by the great lakes, and on the north by Hudson Bay, the province of Ontario boasts over 68,000 square miles of bustling cities, lakes, rivers and culturally significant attractions.

Having already taken a close-up look at the city of Toronto in an earlier edition of this series we now turn our attention to the rest of the province of Ontario. After all, let’s not forget that Ontario is also the home of Canada’s capital – Ottawa – located in the south-eastern corner of the province, on the provincial border with Quebec.

Ontario is renowned for its natural diversity, which includes peaceful forests, sprawling provincial parks and four out of North America’s five Great Lakes.

Aside from its major cities Ontario is renowned for its natural diversity, which includes peaceful forests, sprawling provincial parks and four out of North America’s five Great Lakes. With so much to offer it is no surprise that Ontario is one of the most popular destination for expats relocating to Canada. This level of diversity has helped create a tolerant society that is truly multicultural. 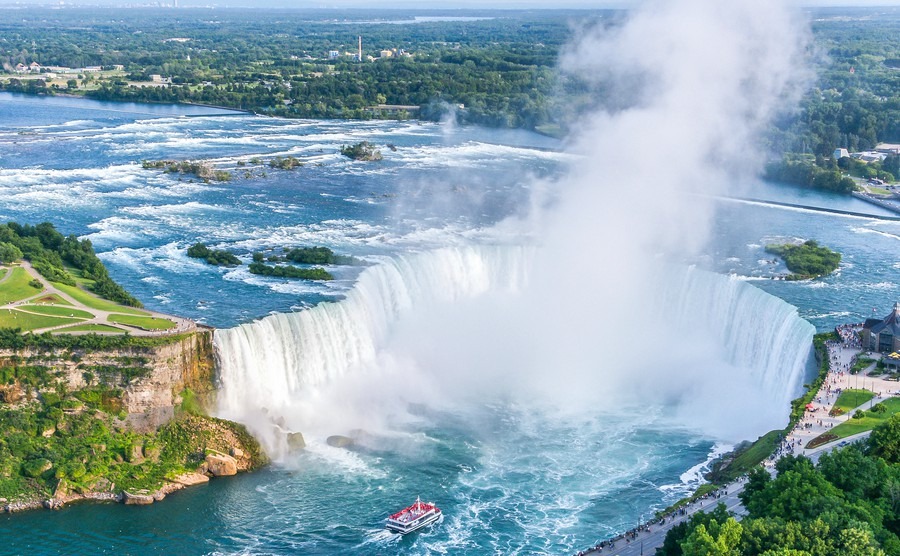 The stunning Niagara Falls is Ontario’s most famous tourist destination.

Without doubt the most famous Ontario landmark site is the amazing Niagara Falls. Located right on the border with the United States, Niagara Falls is actually a collective name for three waterfalls that together have the highest flow rate of any waterfalls in the world – an impressive sight that has to be seen to be believed.

But there is more to Niagara Falls than just the waterfalls; the area is also has a thriving wine industry with many vineyards to visit and sample their whites and reds in the tasting rooms. Or for the more active you can take a bike tour around picturesque Niagara-on-the-lake.

Wherever you wish to live in Canada, knowing how to negotiate for your property should get you a little more house for your money! Download our guide: How to Negotiate Abroad.

Ontario’s household incomes rank among the highest of any Canadian province. The minimum wage in Ontario, as of October 1st 2017, will be $11.40 CAD (£6.82) and the average household income in Ontario is well over $80,000 CAD (£47,800) – both high compared to the rest of Canada. As you may imagine this also means that the cost of living is slightly higher than the Canadian average, but overall the standard of living is very high.

In fact Ottawa and Toronto are often ranked as two of the world’s most liveable cities, performing well in categories such as cleanliness, safety, education and healthcare when comparted to global cities of a similar size. With all this considered it is no surprise that around half of all newcomers to Canada head straight for the province of Ontario – that is some 125,000+ new Ontarians each year.