Finding a Canadian destination to suit your budget

With so much to offer – space, jobs, scenery, property – it’s easy to see why Canada is such a popular destination. But where exactly should you head to find your perfect property? Let’s explore your options at both ends of the budget scale.

Being willing to make some sacrifices and compromises can really help you find an affordable housing option. As always location is one of the biggest drivers when it comes to property prices. Exploring locations a little outside the city centre is one of the easiest ways to keep the cost down. You could also look further afield than big cities like Toronto or Vancouver. By house hunting is lesser known destinations like Winnipeg, you will find that your Canadian dollar stretches a lot further.

The city of Winnipeg in Manitoba is growing in popularity thanks to an enticing combination of high-class urban living that’s within easy reach of Canada’s great outdoors. Yet it remains much more affordable than larger Canadian cities. A detached family home averages $300,000 CAD (£169,000) around here. Well below the national average of $496,500 CAD (£280,000). 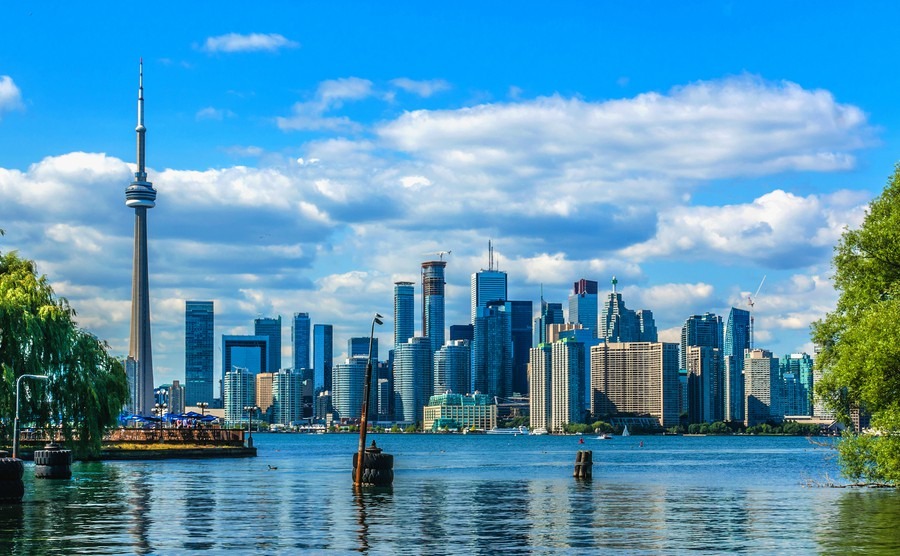 Toronto continues to attract the most big-budget buyers.

Another affordable destination is Moncton. The largest city in New Brunswick’s has a population of just over 70,000 and is one of the cheapest cities to live in the Maritimes – with the cost of living 5.2% below the national average. If you want to be close to Vancouver but don’t have a big-budget, consider Abbotsford. Located just 70 km away, it’s one of British Columbia’s more affordable big cities – with a cost of living that sits at 3.6% below the national average

The Canadian luxury home market is thriving, with plenty of supply to satisfy the demand. This there are lots of great options out there for those with some cash to splash on their dream property.

Toronto and Vancouver are the heavy hitters in terms of high-end Canadian homes. In recent times Toronto has begun to outpace its rival in terms of luxury sales (over $1 million CAD) and is now home to the highest number in the country. House hunter’s can expect to pay an average of $1,284,000 CAD (£723,500) for a detached property. That said, Vancouver remains more expensive, with detached houses costing an average of $1,737,000 CAD (£974,000).

Toronto and Vancouver are the heavy hitters in terms of high-end Canadian homes.

Remaining in the same area, Mississauga – a large city neighbouring Toronto on Lake Ontario – is a desirable place to live for Toronto city workers. Its intrinsic links to the capital of Ontario, combined with a plentiful supply of high-end homes – from modern condo’s to luxury lakeside family homes – has caused the price per square foot to rocket by a whopping 309% in 10 years – from just $108 CAD in 1997 to around $334 CAD in 2017. With an average house price of $631,700 (£354,150) it’s the third most expensive city in the country.